Istanbul is on the threshold of a dangerous confrontation. 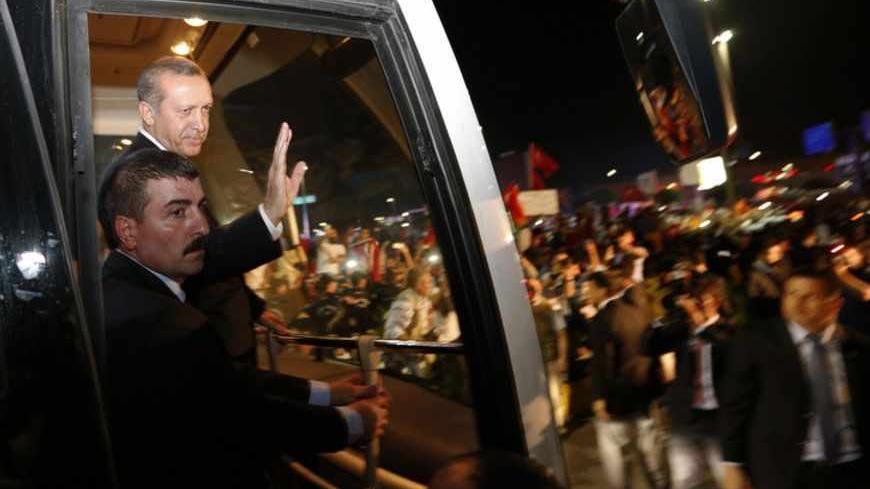 On one side is the "liberated center” of Istanbul, the eminence of Turkey, a city, a true megalopolis, once the capital of two empires. Here is the Gezi Park of Taksim Square, where the most colorful “revolution” of Turkish history has erupted. Thousands of people live in the park night and day, in the midst of a never before witnessed carnival of freedom. An amazing diversity of Turkey’s people, from the religious who call themselves “anti-capitalist Muslims” to LGBT (lesbian, gay, bisexual and transgendered) groups, from anarchists and leftists of all shades to ecologists, from veterinarians treating animals free of charge to human rights workers — all melded into one in an incredible display. In contrast to this peaceful and unprecedented unity are barricades erected at all the roads leading up to Taksim, at the highest point in Istanbul.

On the other side are tens of thousands of people who went after midnight to the international airport 20 km from the city to meet Prime Minister Recep Tayyip Erdogan upon his return from a four-day trip to North Africa. Around 0200 hours, Erdogan, along with his wife and some of his ministers, climbed atop a bus and delivered a fiery speech that chilled his opponents and brought wild cheers from his partisans and shouts of “Let us go and crush Taksim," "Turkey is proud of you,” and more than anything else, “Ya Allah, Bismillah, Allahu Akbar.”

Any foreign observer watching this scene could easily conclude that Turkey is headed toward “civil strife” or that there will be bloodshed at Taksim.

Yet the results of a poll published in Turkish newspapers on June 6 should send a different message to Turkey and the world. Two young academics at Istanbul Bilgi University conducted an online poll of 3,000 respondents to determine the profile of those involved in the Gezi Park protests. According to their findings, 40% of the participants in the protests that erupted in the final days of May are between the ages of 16 and 24, and the rest are aged 24 to 30. That is to say, those taking part in the protests that turned the country upside down, severely disturbed Erdogan and rattled his government are very young, and most of them have never known any other leader than Erdogan or a government other than the Justice and Development Party's (AKP).

Another interesting finding is that 57% of the protesters had previously never been involved in a political protest. Asked why now, 91% said to oppose authoritarianism. Asked to describe themselves, 81.7% said “libertarian.” The pollsters warn, however, that the description should not be translated into English as “libertarian,” but as “freedom seeker.”

Those forming the core of the protests that have truly shaken Turkey are those labeled as “apolitical” by older generations. Actually the sights at Gezi Park in a way confirm the aptness of the “apolitical” label. These young people, who have stunned the country, start their day with pilates in the park. At any hour of the day, one can see groups doing Turkish or Kurdish folk dances while hard rock streams from elsewhere in the area. Some corners resemble London's Hyde Park. People hand out leaflets; much beer is consumed. A sense of humor never seen elsewhere in the world prevails.

After Prime Minister Erdogan declared the protesters “a handful of capulcu” — which roughly translates into English as “marauder,” “looter” or “street thug” — his words were sarcastically Anglicized to “chapulling” and immediately entered into Wikipedia. The protesters, appropriating the label, inserted “capulcu” into songs and video clips and started spreading the word via YouTube.

Another word that has became a favorite theme of black humor and musical parody is “pepper gas.” So much pepper gas was sprayed by the police that parts of the city still reek of it. What is also striking is that pepper gas is no longer an instrument of fear. Most young people carry gas masks and water bottles, and with amazing creativity and humor, have made it part of their music and videos as well.

Those trying to see “Turkey’s Tahrir Square” at Taksim quickly change their mind after experiencing Taksim as a fair ground and carnival, with jubilant crowds in good humor, recognizing that it is unique.

The young Turkish protesters are the internet generation. They have all advanced applications with Facebook, YouTube and smartphones they have mastered, and above all Twitter, and use them as tools of their apolitical motives. It is this apolitical identity that enables them to stage what is actually an outstanding political action of the century. Perhaps one can call it postmodern politics.

Suddenly Turkey’s most ambitious and passionate ruling party, the AKP, and its leader, Erdogan, appear to be anachronistic vis-à-vis the protesters. The fiery supporters of Erdogan massed in the tens of thousands at Istanbul's international airport, with their chants of “Allahu Akbar,” represent the opposite of those massed in Taksim.

So what will happen now?

Istanbul is at the threshold of a dangerous standoff. Will Erdogan create Turkish shabihas from those who shout “Let’s go and crush Taksim,” or will he direct his police forces to Taksim? Either would mean some sort of bloodshed. If neither occurs, the Taksim protesters appear to have enough energy to sustain their “comfortable existence in freedom without the state,” which they have been enjoying for the past 10 days. But how long can Turkey’s stability, which has gained so much credibility from its economy and its government, tolerate such a situation? Will Istanbul hand the invoice for potential instability to the intransigence of Erdogan or to the Taksim protesters with many a day-dreaming, leftist-Marxist organization among them?

There are many questions without answers. The only reality that cannot be questioned is that Turkey is living through extremely critical days, and they will continue for the foreseeable future.