Al-Monitor columnist Amberin Zaman became the latest target after she was singled out by Turkish Prime Minister Recep Tayyip Erdogan and his followers on social media. 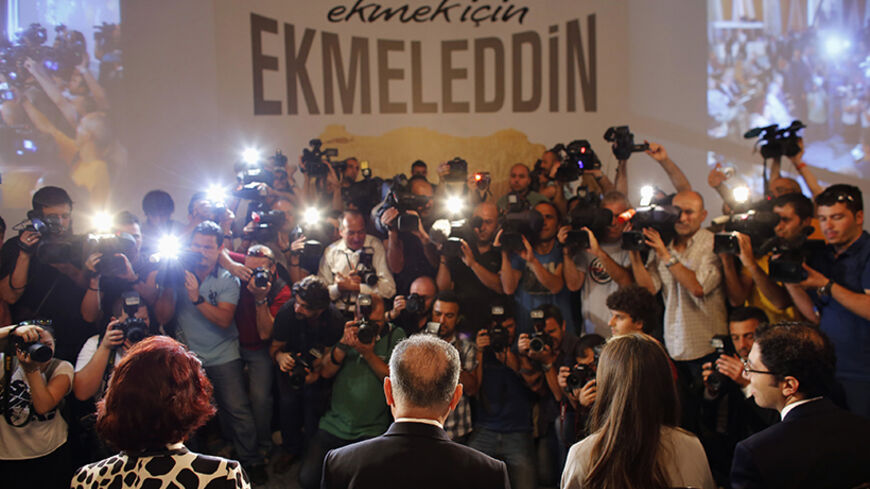 Turkish main opposition presidential candidate Ekmeleddin Ihsanoglu (2nd L, back to camera) is surrounded by the media during a news conference in Istanbul, July 10, 2014. - REUTERS/Murad Sezer

On Aug. 6, Kemal Kilicdaroglu, leader of Turkey's main opposition party, the Republican People’s Party (CHP), appeared on a mainstream TV channel for an interview. This alone is newsworthy, as it is rare to see any politician other than presidential candidate and Prime Minister Recep Tayyip Erdogan on mainstream TV in Turkey. One of Al-Monitor’s Turkey Pulse columnists, Amberin Zaman, was among the journalists interviewing Kilicdaroglu.

Kilicdaroglu, explaining how convincing the arguments of the Justice and Development Party (AKP) have become, said: “The AKP voter base accepts whatever Erdogan tells them as the absolute truth.” At that point, Zaman asked, “Is it not to be expected from a Muslim majority country, where Islam puts the community, not the individual, at the center, and the education system does not encourage critical thinking?” The interview continued as Zaman and Kilicdaroglu went on to explain how propaganda is more effective on the masses when there is limited access to information and critical thinking is not supported.

Instantaneously, a smear campaign from “Erdoganists” — a new term coined during this political lynching process — was initiated on social media, targeting Zaman and Kilicdaroglu. The “charges” against them were “insulting Islam and Muslims,” quite serious in a country with a history of political murders and serious legal consequences for insulting Islam.

Some of the comments on Twitter were threatening, asking Zaman what she was doing in a Muslim country and using profane language. Zaman’s comments were taken out of context and reframed as belittling the AKP electorate. As a handful of journalists and parliamentarians came to Zaman’s defense on social media, pro-AKP elites and “others” were silently watching as the troll accounts went on with their social lynching.

On Aug. 6, speaking at an election rally in Malatya province, Erdogan called Zaman out. Although Erdogan did not utter Zaman’s name, he referred to the TV program on which Kilicdaroglu appeared and then called Zaman a "shameless militant woman in journalist disguise." Within minutes, Erdogan's words spread on social media, and even harsher attacks followed against Zaman.

Erdogan said, “Know your place, you are just given a pen to write a column in a newspaper, and you insult Muslims. Ninety-nine percent of this country is Muslim.” For the careful observer, Zaman had said pretty much what Erdogan said — that this is a Muslim majority country. Now, you may wonder why Erdogan and the pro-AKP crowd are so angry.

It may well be their sensitivity to Islamic values. Yet, they have been tolerant in extreme cases, for example, toward Egemen Bagis, former minister of European Union Affairs, who resigned after the Dec. 17 graft probe, when his alleged recordings became public as he was “joking recklessly about the Surah Baqarah” (a chapter of the Quran). As a handful of theologians condemned Bagis, most if not all AKP elites were silent about the allegations. Bagis was on the phone with a journalist, and the journalist went on the record apologizing for the conversation, which was seen as proof that the tapes were genuine. Indeed, Bagis was on the balcony with Erdogan during his victory speech on March 30, the night of municipal elections. Mocking the Quran is seen as blasphemy, yet we have not heard a word from Erdogan or other AKP elites on Bagis. One cannot help but ask: If a minister can mock the Quran and be tolerated in AKP circles, why would a journalist who remarked on a “majority Muslim society” be scolded for “insulting Islam”?

Erdogan and his men also rally the crowds by suggesting that elites in Turkey look down upon the man in the street. In this instance, Zaman and Kilicdaroglu’s comments on the education system were deemed offensive. Yet their words echoed comments from Nimet Cubukcu, former minister of education from the AKP, who said in 2011 that “42% of students are receiving a low-quality education.” Similarly, in August 2013, then-Minister of Environment Erdogan Bayraktar said, “We are a Muslim country, so we cannot be expected to raise inventors, scholars from our lands.”

Zaman was not the first to be targeted by Erdogan and the AKP. Indeed, it has become a pattern with the party. During the Gezi protests, Erdogan branded a young actor as one of the perpetrators of the “coup against the AKP government,” along with what has been termed the interest rate lobby.

Erdogan’s rhetoric during the presidential election campaign became more divisive along identity lines. On Aug. 2 in Izmir, Erdogan said, “Kilicdaroglu, you are an Alevi and I am Sunni. You should state this openly. Demirtas [Selahattin Demirtas, head of the People's Democracy Party and presidential candidate], you are Zaza. Don't be worried about speaking out about this.”

These comments generated reactions from the opposition, so during an Aug. 5 TV interview, Erdogan explained what he meant with an even more controversial statement. He said, “Let all Turks in Turkey say they are Turks, and all Kurds say they are Kurds. What is wrong with that? You wouldn't believe the things they have said about me. They have said I am Georgian. … They have said even uglier things — they have referred to me as Armenian, but I am Turkish.”

These are just the most recent examples. Erdogan and AKP elites have a history of publicly denouncing journalists, actors, pundits and civilians. These hateful words have consequences: Most of the time, they generate a round of anonymous threats and in some cases, prompt the individual to seek protection from the government.

The incident after the Soma mine disaster, when an Erdogan aide brutally attacked a mourner, demonstrates how intense discriminatory rhetoric can fuel violent behavior.

Members of the Turkish parliament are also not immune to the rise of aggression. On Aug. 4, Sinan Ogan, a prominent parliamentarian from the Nationalist Action Party (MHP), was physically attacked by 60 AKP parliamentarians. Ogan had simply asked what the Turkish government was doing for the Turkmens facing attacks by the Islamic State. Following the attack, all political parties expressed their concern to Ogan on social media, except for the AKP. Ogan told Al-Monitor, “In addition to sympathy, we received death threats after the incident. They even called our office phones at the parliament. I informed the head of the parliament and interior minister and received no responses so far.” Despite it all, Ogan hasn't lost his sense of humor: “Maybe they will send flowers to our funerals?” he said.

Samil Tayyar, an AKP parliamentarian, posted on Twitter: “MHP should take Ogan to the doctor and get him a rabies shot.” The pejorative language could hardly be considered remorse or apology. Several others on social media commented, “Fights happen all the time in parliament, what is the fuss about?”

Erdoganists’ angry rhetoric is worrisome, particularly because it escalates at a dizzying pace, with the Turkish public becoming inured to these outbursts. It has become the norm. So much so that even those who are not active in the lynching process either condone the behavior silently or find further guilt with the victim. Attempting to stand up for each victim on social media, I have received several comments like, “Why are you supporting her? Do you think if the shoe was on the other foot, she would stand up for you?” and “Are you an Alevi? Why are you always defending them?” and “He used to support Erdogan in the past, remember?”

The public reaction to the hate rhetoric is as revealing as the rhetoric itself. It is disappointing to see how mainstream and social media follow the lead of politicians and label the targeted victims with charges blown out of proportion. There are no legal consequences for these angry outbursts, so it has turned into a pastime for the idle masses, who wait to watch the “next big fight.”

In a sense, the Erdoganists have built a virtual Colosseum, where unsuspecting opponents of the regime “gladiators” are served to the power-hungry lions. If you listen carefully, you can even hear the ritual chorus, “We, who are about to die, salute you!” We can no longer escape the fact that lynching has become a systematic and increasingly dangerous practice for the “new” Turkey.