The Justice and Development Party (AKP) government is targeting female journalists, making it even more difficult for them to do their jobs. 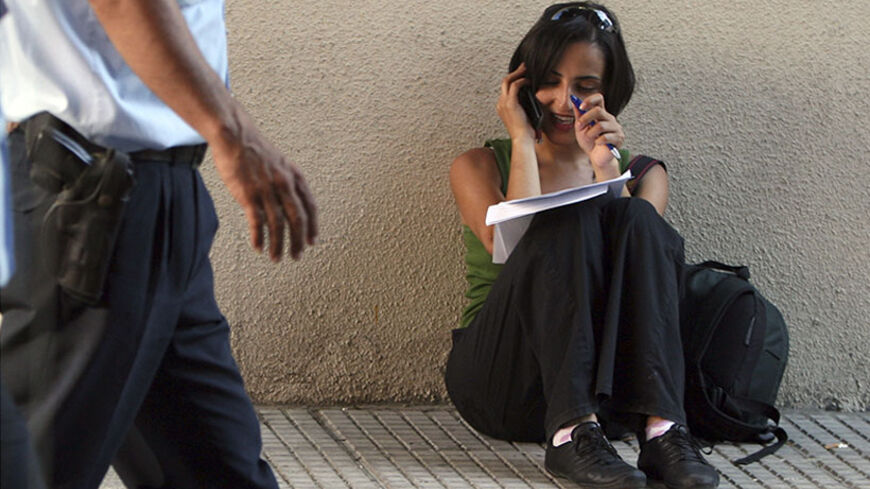 The shrinking media freedom in Turkey is in danger of becoming gender-specific. Female journalists critical of government policies who appear on TV seem to be specifically at risk of retaliation. Ceyda Karan of the daily Cumhuriyet is the latest target of a smear campaign after her appearance Aug. 20 on a CNN Turk news talk show. Although she did not say that those supporting Prime Minister Recep Tayyip Erdogan are stupid, Cetiner Cetin, a male co-panelist who writes for the pro-Justice and Development Party (AKP) Islamic daily Yeni Safak, twisted her expressions to make it sound that way.

“The moderator was asking about the possibilities of early elections. Kadri Gursel, a fellow columnist at Al-Monitor and the daily Milliyet, said they could even occur as early as November. I agreed on that being a possibility and that it all depends on developments,” Karan told Al-Monitor. “I, however, stressed that it is misleading to discuss these issues as if all is normal in this country. With the outcome of the presidential elections, we talked about how the country will be transformed into a presidential system moving away from a parliamentary system. But we didn’t discuss whether we need a presidential system, and whether it is good for the country. In the 2007 referendum [when most secular voters objected to the presidential candidacy of Abdullah Gul, who is about to leave office], the government asked people whether they should directly elect the president the next time around, and managed to amend the constitution accordingly. All of this was done without a real debate, however. In the absence of a true debate discussing the pros and cons of such a regime change, they [Erdoganists] distributed a memorandum to their constituency and made them support the AKP’s will. People don’t have to know everything, but they are being misled.”

Karan added, “Here we have a leader who wants to rule Turkey for a long time, and we are discussing this era as if it is normal. Populist politicians are pulling the country into questionable directions.”

On Twitter, Karan immediately received insulting and demeaning character assassinations. She read one of them on air. Noyan Barlas, using the acronyms AK (of the AKP) and RTE (of Recep Tayyip Erdogan) indicating her political affiliation, wrote: “Male-faced presumptuous woman, you give your life for Erdogan. You cannot belittle the constituency. Know your place, you despoiler, sheepish, transvestite-faced ugly thing.”

Karan told Al-Monitor that she received hundreds of such tweets in a very short time. “This is lynching, ” she said. “But I quickly took my revenge during the program. Cetin recently wrote a story about Makhmour refugee camp [based in northern Iraq housing Turkish Kurds] and how it will be evacuated. He did not say when. I, however, talked about it as if he had proposed [based on his sources] that the camp be shut down in one to five months. He replied sharply, insisting that he had not given any time frame. And I told him that this is an example of how [a misleading] public perception can be built up.”

On Aug. 5, Amberin Zaman, another fellow columnist at Al-Monitor and at the daily Taraf, was among a group of female journalists on a CNN Turk news talk show where she interviewed Kemal Kilicdaroglu, the leader of the main opposition Republican People’s Party (CHP). At one point, Zaman wondered why Kilicdaroglu was expecting the Muslim crowds who place community before individualism to act independently, and she subsequently became the prime minister's target. Speaking at a rally in Malatya on Aug. 6 as part of his presidential campaign, Erdogan reacted sharply to Zaman — adding fuel to the already ongoing smear campaign against her on social media — and framed her as "a shameless militant woman in journalist disguise." Al-Monitor's Turkey Pulse contributor Pinar Tremblay wrote on Aug. 8 about Zaman’s ordeal in detail.

On Aug. 22, Zaman used her Taraf column in support of Karan and to raise awareness of the rising risks for female journalists to survive in Turkey. Interestingly, Erdogan often talks about "entering politics wearing his shroud." He uses this death metaphor in an attempt to underscore the risks he has taken by being determined to speak his mind. Yet, he seems to be forcing female journalists determined to speak their minds, and who are critical of his policies, to feel like they are wearing a shroud. “With the help of the incoming president, my words were twisted,” Zaman wrote. “I was declared 'Islam’s enemy.' As a result, there are those who would be in seventh heaven if the Islamic State [IS] were to decapitate me. I'm talking about those neo-lumpen groups [that make up] Erdogan’s cult. In the words of one of my conservative friends, they are just one tick behind IS [militants].”

Zaman also for the first time wrote openly about the “rape and murder” threats female journalists Melis Alphan, Sirin Payzin, Selin Girit, Tugce Tatari, Banu Guven, Nuray Mert and Ece Temelkuran received during the 2013 Gezi Park protests. Professor Yasemin Inceoglu at the Galatasaray University communication department told Al-Monitor, “All these journalists are professionals. The attacks against them are nothing but an open threat to silence those few critical minds in the media. I certainly don’t understand the silence of some other female journalists — playing the three monkeys, when their colleagues are subject of such a lynching campaign.”

Although there are campaigns in support of these female journalists, it is something else to stand up against a strong government and a crowd backed and encouraged by this government. “We did not file a lawsuit against those threats because of the sensitive environment back then,” Karan told Al-Monitor. “And I have no knowledge that our security enforcement did anything against it, even when these threats were made public.”

The government’s pressure cost both Zaman and Karan their jobs at the Haberturk daily newspaper, with Zaman now writing for Taraf and Karan for Cumhuriyet. Karan said, “I did not lose the job after one incident, but Foreign Minister Ahmet Davutoglu literally lashed out at me in three separate live TV interviews. I remember well the one in December 2011 when I asked him — based on the information I was receiving from my sources inside Syria — about the Salafist groups that were spreading fear and [their activities] being no less of a threat than those of [Syrian President Bashar al-] Assad. He said then that they know Syria street by street, quarter by quarter, while denying the Salafist threat and entirely blaming Assad. Today, we know the result.”

Karan told Al-Monitor that Davutoglu’s appointment as prime minister means nothing but the continuation of pressure on the media. “As long as journalists talk about what the government does in a positive light, there is no problem. Their policies are not supposed to be questioned. Therefore, media freedom is going to shrink even further, if this situation continues.”