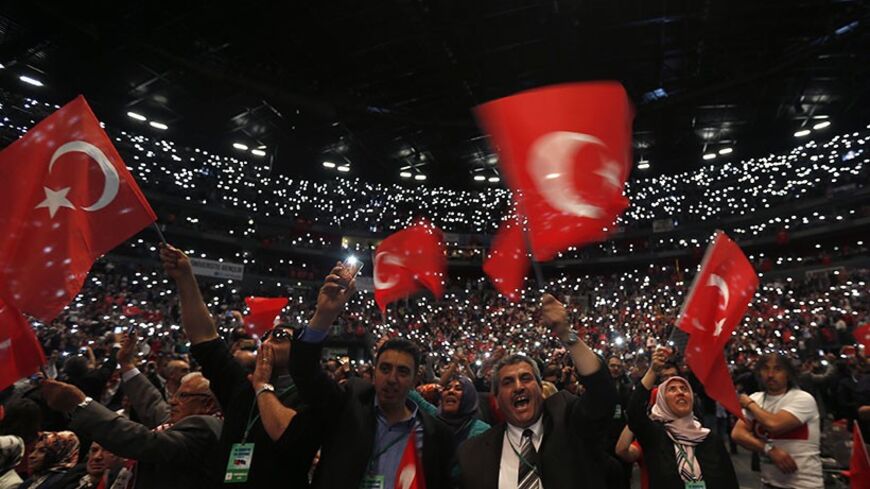 Supporters of Turkish Prime Minister Recep Tayyip Erdogan hold up their mobile phones and wave Turkish flags ahead of his visit to Lanxess Arena in Cologne, May 24, 2014. - REUTERS/Wolfgang Rattay

Ideally, Turkish Prime Minister Recep Tayyip Erdogan and German Chancellor Angela Merkel should have appeared together in front of the 15,000 Turks gathered in Cologne to mark the 10th anniversary of the founding of the Union of European Turkish Democrats (UETD) on May 24.

They would thus not only have contributed to the well-being of the 2.7 million Turks living in Germany, but also to amity between Turkey and Germany. Given his divisively bellicose style of politics, however — which has in fact worked for him in Turkey — it is difficult to see Erdogan in the role of unifier, pacifier or conciliator.

As it turned out, the only contact between Erdogan and Merkel was a phone conversation on May 22 before Erdogan traveled to Germany. While Ankara tried to put a positive spin on the 35-minute conversation, it could not hide that it was held only days after the Merkel government warned Erdogan not to stir the cauldron while in Cologne.

“The German government expects Prime Minister Erdogan to show a sense of responsibility and sensitivity at this appearance,” government spokesman Steffen Seibert told reporters in Berlin on May 19.

Emphasizing that Erdogan’s visit came at a highly sensitive time, immediately before European parliamentary elections and a very controversial time in Turkish domestic politics, Seibert added that Erdogan’s planned speech to the thousands of Turks expected to gather in Cologne’s Lanxess Arena should take into account the “good coexistence” of Turks in Germany,

Erdogan, however, was clearly not planning to visit Cologne to contribute to the “good coexistence” of Turks in Germany, or to unity among Turks in Germany who are increasingly divided along the Sunni-Alevi fault line. Neither was he too concerned about contributing to amity between the two countries.

Erdogan recently increased tensions in ties when he lambasted German President Joachim Gauck, who criticized the state of democracy in Turkey during an address to students at the Middle East Technical University, while on an official visit to Ankara. Erdogan effectively told Gauck to stop acting like the pastor he once was and mind his own business.

Ostensibly, traveling to Cologne to mark the 10th anniversary of a Turkish organization, which has close links to his Islamist Justice and Development Party (AKP), Erdogan’s real intention was clearly to promote his bid for the presidential elections due to be held on Aug. 10.

He has not yet officially announced his intention to run, but it is hard to imagine that there was anyone in the Lanxess Arena who was not aware of the fact that Erdogan had little choice but to run, unless he was preparing for the highly unlikely possibility of withdrawing from politics.

The AKP decided to retain its “three-term policy,” which means that Erdogan, who has contested more than three elections, cannot run again. This leaves the presidency as the only place he can go.

Analysts say Erdogan is short of around 5% of the vote for winning the elections in the first round of voting, as he desires, to reinforce his intention to exercise executive powers as president, even if the constitution does not allow for this in its present form.

Turks outside of Turkey will for the first time be allowed to vote in these elections. This makes the nearly 1.5 million votes in Germany crucial for Erdogan. German politicians are also aware of this and reflected it in their remarks prior to Erdogan’s Cologne appearance.

Thomas Strobl, the deputy chairman of Merkel’s conservative parliamentary bloc, for example, said, "It would have been better if Mr. Erdogan had recognized ahead of time that at the moment there are tasks in Turkey that are more important than a campaign appearance in Cologne.”

The same view was repeated by left-wing German politicians. Martin Schulz, the Socialists' candidate for European Commission president, said, "I'd prefer it if Prime Minister Erdogan concerned himself with Turkey's problems instead of waging election campaigns abroad in Cologne. But, we are a tolerant and democratic country in which of course a foreign leader can speak.”

The German media was, however, less diplomatic. "Erdogan, you're not welcome here! We do not want politicians like you," the mass circulation Bild newspaper declaimed in its headline in both Turkish and German, highlighting in its open letter to Erdogan his increasingly authoritarian policies.

During his address in Cologne, Erdogan was perhaps less bellicose then might have been expected, no doubt due to the warnings he got from German politicians and the negative commentary in the German press that was expecting the worst from him, but he was still less than conciliatory.

"No one, no country, no international community can shake their finger at Turkey, none can dictate us in arrogance what to do," he told his supporters gathered at the Lanxess Arena from all over Germany by pro-AKP activists.

He also lambasted the German media for its coverage of the Soma disaster and his Cologne visit, and did not hold back from delving into a touchy subject for Germans — the issue of assimilation of Turks in Germany. "Assimilation? No. I have said this before and I'm saying it again — we don't compromise our language, religion and culture," he said.

He was repeating the remark he made in Germany in 2008 that angered German politicians increasingly wary about the inability of conservative Turks to integrate into German society, even though they have no intention of returning to Turkey. Erdogan corrected himself at the time by saying he was not against integration but assimilation, which he referred to as a “crime against humanity.”

Many Germans, however, see Erdogan’s continuing reference to assimilation as encouragement for Turks not to integrate into German society. Germans also noted with anger that Merkel was booed and jeered by Erdogan’s supporters during his Cologne speech, even though he tried to prevent them from doing so.

Erdogan also got a rapturous applause when he said defiantly: “Now there is a new Turkey, not the one you know from before. The EU should face and embrace the new Turkey.”

Events outside the Lanxess Arena, however, showed that Erdogan does not enjoy the support of all the Turks in Germany, as 45,000 mostly Alevi Turks took to the streets of Cologne to protest him as he delivered his heated speech to followers.

The demonstrators were not only angry because of Erdogan’s less than humane attitude toward the recent mine disaster in Soma, which left 301 miners dead, but he has also caused anger in and outside Turkey among Alevis due to his policies considered to be sectarian — an issue covered by Al-Monitor’s Cengiz Candar on May 26.

The bottom line is that while Erdogan may have guaranteed the votes of conservative Sunni Turks in Germany, he carried his divisiveness beyond Turkey’s borders with his visit to Cologne. Cem Ozdemir, the co-chairman of the German Greens Party, who is of Turkish origin, also believes that Erdogan has made life more difficult for Turks in Germany, because Germans are not likely to forget that Merkel was jeered during the Cologne gathering.

Ozdemir told daily Zaman that there would be a price to pay for this. He added that Erdogan’s negative image in Germany was unlikely to improve after this, and said this was also harming Turkey’s image.

This, however, appears to be the case for the whole of the West and not just Germany, regardless of Erdogan’s continuing popularity and political success in Turkey. Marc Pierini, an analyst for Carnegie Europe and a former representative of the European Commission in Turkey, also underlined this in a piece carrying the telling headline, “Victory at Home, Estrangement Abroad,” which he wrote immediately after the AKP won the local elections on March 30.

Underlining the manner in which Erdogan has alienated Alevis, secularist opposition politicians, journalists and judges in Turkey who “remain an integral part of Turkish society,” Pierini said, “Such moves are perceived as a worrying trend by the West and NATO. Today, no one is cheering in Washington, Berlin or Brussels.”

Pointing out that restoring Turkey’s social harmony at home and image abroad is the major challenge for conservative political forces and the country’s business circles, Pierini concluded by declaring, “The bottom line is this: Despite winning big at home, Mr. Erdogan has lost prestige abroad.”

Erdogan is so transfixed on his political mission presently that this is not an issue he is prepared to face up to today. He will nevertheless have to face up to his image problem in the West eventually, especially if he is elected president. Turkey can hardly afford a president who is engaged in acrimonious debates with its Western partners.