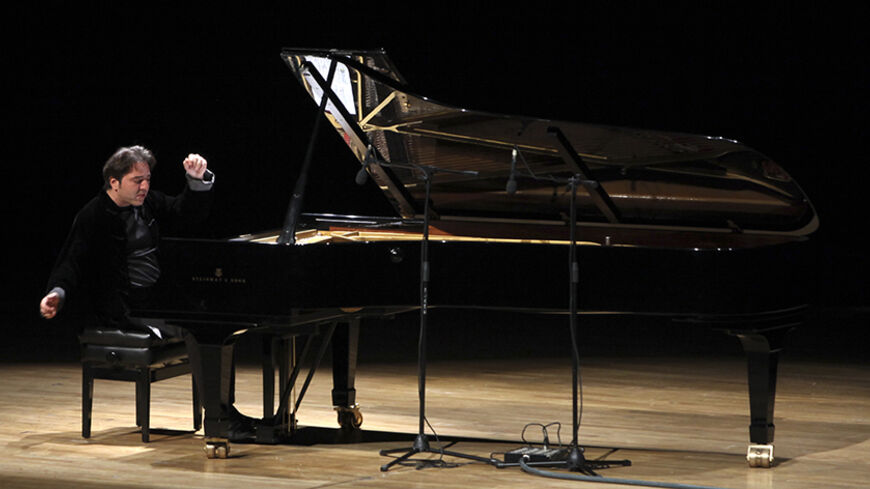 As a country with deep religious, sectarian, ethnic and ideological fault lines, social cohesion has been elusive for Turkey in the best of times. Matters, however, appear to be getting worse under President Recep Tayyip Erdogan’s divisive leadership. Artists and writers have also been dragged into the center of the storm, contributing to further social discord.

Al-Monitor has covered the case of Turkey’s world renowned pianist Fazil Say, who’s been hounded over his anti-Islamism stand and opposition of Erdogan and the ruling Justice and Development Party (AKP) to the brink of abandoning Turkey.

The smear campaign by the pro-Erdogan camp against Nobel laureate Orhan Pamuk and best-selling author Elif Shafak has also been noted by the world media. There are, however, names that are famous in Turkey but unknown to the world who have also stirred major controversy because of their position on Erdogan.

Novelist Alev Alatli, for instance, caused an uproar recently when she said George Orwell and Daniel Defoe would have given Erdogan a standing ovation for criticizing the United Nations for effectively being under the control of five countries. Alatli uttered her words after receiving the Presidential Prize for Culture and the Arts from Erdogan on Dec. 3.

Alatli, who holds degrees from Vanderbilt University and Dartmouth College, continued in similar vein later during an interview with CNN Turk.

“To try and poke out the eyes of a leader such as Mr. Erdogan because he got 52% of the vote is a lowly thing to do,” she said, going on to declare her everlasting commitment to Erdogan and arguing that he is Turkey’s best chance.

Harsh reactions from intellectuals and writers to Alatli were not long in coming and dominated social media for days. Nuray Mert, a hard-hitting political commentator and writer, who has been targeted by Erdogan in the past, did not mince her words.

“She is, in the final analysis, a statist, nationalist Eurasianist person whose mind is confused,” Mert wrote in her column in the online paper Diken (Thorn).

​“But given the existing tableau one cannot remain silent as she tries to make us swallow her contention that Turkey is undergoing a renaissance,” she added.

“The idea of a lofty state may give you pleasure,” Mert said, addressing Alatli directly. “But you should stop upsetting people when there are so many who are suffering under this state and its interpretation of politics,” she added, advising Alatli “to stay at home and just enjoy the prize given to you by Erdogan.”

There was also support for Alatli. Ayse Bohurler, a columnist for the pro-government daily Yeni Safak, argued that Alatli did not deserve the “intellectual despotism” that she was faced with. “As a good reader of Alatli’s I thought to myself, as she was delivering her speech, that this is how opposition should be expressed,” Bohurler said.

“The left-wing literary lobby, which is extremely conservative and orthodox, displayed its usual divisive nature,” she added, trying to turn the table on Alatli’s detractors.

Another artist close to Erdogan who caused uproar recently was folksinger and actor Yavuz Bingol. At the center of the storm he created were his remarks to daily Hurriyet about Erdogan’s attitude to the mother of Berkin Elvan, the youth killed by police during the Gezi Park protests in 2013.

Asked about the incident when Erdogan, who was still prime minister at the time, had allowed Berkin Elvan’s mother to be booed during one his political rallies, Bingol was quoted by Hurriyet uttering: “Tayyip Bey’s [Mr. Erdogan’s] emotions came into play there. When his own late mother was booed in the streets, he had Berkin Elvan’s mother booed the next day. This is a very natural human reaction.”

Following the anger his words elicited, Bingol apologized to Elvan’s mother, who is Alevi, too. Bingol also claimed his words had not been conveyed correctly, prompting Hurriyet to make available the unedited tape recording of his remarks on its website.

Bingol is heard saying, “Let me put it this way, for instance when his dead mother was booed and when Tayyip Bey had Berkin Elvan’s mother booed … What is the end result? This is emotional.”

Pro-government papers immediately claimed that Hurriyet had intentionally distorted Bingol’s words to make him a target because he supports Erdogan. Bingol, however, continued to be attacked for seemingly justifying Erdogan’s position with regard to a deceased youth’s mother.

Bingol’s father and brother joined the angry chorus. Both said their only consolation was that Bingol’s mother was suffering from Alzheimer’s disease, which made her unaware of what her son had said.

Erdogan, for his part, leaped to Bingol’s defense, saying he was being “lynched because he was seen in a photograph side by side with President Tayyip Erdogan.” The reference was to a controversial picture showing Erdogan and Bingol warmly shaking hands during a reception in August. Pointing out that the same was being done to Alatli, Erdogan called on all artists “to be brave,” and said they would stand firmly by them.

Alatli and Bingol were not the only ones from the world of the arts at the center of a storm over their support for Erdogan. The famous film star Hulya Avsar also found herself drawn into an angry controversy for the same reason.

She was targeted by Kemal Kilicdaroglu, the head of the main opposition Republican People's Party (CHP), after she said that claims about the grandiose nature of Erdogan’s new presidential palace were grossly exaggerated.

“I was about to tell [Erdogan] that my house is more splendiferous, but I couldn’t say that, of course,” Avsar said jokingly after visiting Erdogan in his palace with a group of businesswomen.

While talking to reporters on Dec. 6, Kilicdaroglu said Erdogan was throwing barbs at him to remain on the agenda. “But I won’t enter into an argument with him because this will not bring him prestige. What will bring him prestige is his palace,” Kilicdaroglu said mockingly, adding for good measure that Erdogan should also select Avsar as a neighbor.

Angered over these remarks, Avsar took the CHP leader to court, a move that only elicited more cynical gibes from Kilicdaroglu. “Who is Avsar, an artist? That is questionable. No offense, but a flunky can’t be an artist. Artists stand firm. They are malcontents by nature. An artist does not bend over double in the face of power,” he told reporters.

Avsar’s retort came immediately. Claiming that Kilicdaroglu’s greatest fault was that he was against democracy, Avsar said she would disregard the CHP leader because he was on his way out anyway.

“Therefore I send my greetings to Kilicdaroglu and say those are his own opinions. I have no doubts about my career as an artist of 31 years standing. I know Kilicdaroglu is not a leader, but I also have my doubts that he is a politician,” she said acidly.

Such is the tone and quality of the debate in Turkey today, where social divisions continue to intensify as the acrimony between Erdogan’s supporters and detractors grows, while Erdogan does little to try and unify the nation.