A protest that started with 500 people on Monday, May 27, turned into a seeming revolt against Turkish Prime Minister Recep Tayyip Erdogan. 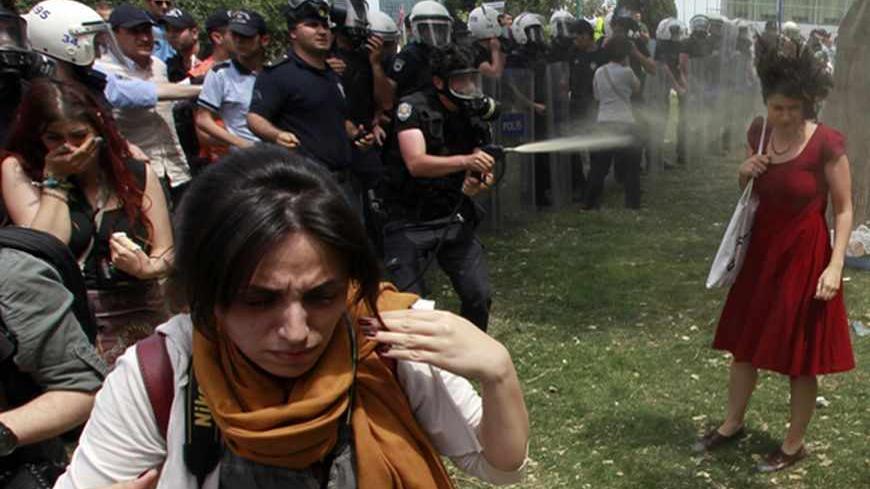 A Turkish riot policeman uses tear gas as people protest against the destruction of trees in a park brought about by a pedestrian project, in Taksim Square in central Istanbul, May 28, 2013. - REUTERS/Osman Orsal

Just like that iconic picture in 1989 known as the “Tank Man of Tiananmen,” Reuters' top photo on Tuesday [May 28] showing a young woman wearing a short-sleeve burgundy dress, carrying a white tote bag over her shoulder while a police officer wearing a gas mask spraying pepper into her face will be equally remembered as a historic picture down the road.

Something changed for the decade-long rule of the Justice and Development Party (AKP) on Friday [May 31], as the police crackdown took a turn for the worse. Pepper was sprayed and pressured water canons were used on the peaceful protesters in downtown Istanbul; protesters who have been unable to stop the government’s plan to demolish one of the city’s few remaining parks, cutting down 70-year-old trees to rebuild the Ottoman Artillery Barracks that were originally built in 1740 and destroyed in 1940.

Addressing the General Convention of Turkey Exporters Assembly (TIM) on Saturday [June 1], Turkish Prime Minister Recep Tayyip Erdogan, however, stressed over and over again in his speech, “We will build that Ottoman Artillery Barrack there.” The prime minister insists that this protest “is not an issue about those 5 or 6 trees [in the park]. This has now become an ideological struggle. They say that we will build a shopping mall there, but there is no concrete decision. Whoever is my counterpart here [on the side of the protesters] should sincerely say what they want, but we will build that Ottoman Artillery Barracks there because it was once there.”

Erdogan does not seem to be getting the message. While this protest may now turn ideological, it all started as a small gathering of about 500 people on Monday [May 27]. The reason it got out of control with massive protests in 10 other cities around the country — Adana, Konya, Tunceli, Mersin, Mugla, Marmaris, Izmit, Adana, Izmir, Van and Sivas — is that Erdogan has shown no culture of consensus building with those who disagree with him. Instead, he painted the protesters as “anti-democratic” and engaging in “illegal” activities.

Once the real information of the use of pepper spray and pressured water canons on the protesters becomes available — besides what our eyes have witnessed — the world will judge from this data how democratic and justified Erdogan's decision was to send the riot police to violently crack down peaceful protesters who were doing yoga, and danced and sang in an attempt to save the trees. Police even burnt their tents at night while they were sleeping inside. When these pictures found their place in the international media, friends from overseas thought Turkey had started a war with Syria. There can be no rational justification of using this amount of pepper spray on people. What is even more troubling is that at about 4 p.m. on Saturday, after Erdogan addressed this issue in a speech, the news broke that the government ordered the police to withdraw from Taksim Square. Protesters sent them off in a festive mood with loud applause. Then, more police walked to Taksim Square. It was as if the police had set a trap for the people, and started attacking them in an unprecedented way with significant pepper spraying. It did not last long, but it was chilling — as if the day's trauma was not enough.

This protest likely spread to other cities because of police brutality and the AKP government’s bad management. Period. Erdogan has now assigned his top adviser, Ibrahim Kalin, to mediate with the protesters in Istanbul to solve this matter. Although he accepts that the police might have used excessive force, he is still blaming the opposition for being the main culprit of the events getting out of control. It is not. Many believe that while Islamists might have suffered in the past, they are taking revenge now on a segment of the population that represents a different lifestyle. They feel like they are being cornered, and pushed into a small space to continue living the way they do.

Recalling that Reuters photo, Sukur Kucuksahin, a Hurriyet daily columnist, for example, told Al-Monitor, “Had this girl worn a headscarf, the prime minister and president would have already called her parents to extend their apologies and wish her a speedy recovery. When it’s about people like those women, they remain indifferent and silent. The police should treat everyone equal.”

Put differently, these few trees in Istanbul now symbolize a struggle for a lifestyle and to stop further differentiating people as pro- and anti-AKP. Warning Republican People's Party (CHP) leader Kilicdaroglu not to use any provocative language at his rally in Istanbul today, Erdogan said, “If he gathers 20,000 people, I can gather 200,000 … 1,000,000. He should not bring the issue to that point.”

It would have been preferable if Erdogan were not to differentiate his people either. After all, he is the prime minister of all the people in this country, and is responsible for their safety and well-being without making any distinction.

Kilicdaroglu has acted responsibly by canceling his party’s rally in Istanbul today. For the last 24 hours, the people of Istanbul have been active on twitter calling the CHP to cancel its rally, and not to use this social protest for political gains at this time in the hope of scoring big at the ballot box. People want to keep this protest apolitical, just the way it started. Those protesting are reacting to Erdogan’s majority rule dismissing their sensitivities and showing no tolerance to any kind of criticism. People, for example, started gathering in larger numbers on May 29, as a reaction to Erdogan saying that the construction would continue “no matter what.” He now repeats the same thing after a Turkish court in Istanbul decided on May 31 to place a “precautionary hold” on the construction, and when people had hoped that they could argue their side of the story before an independent judge.

Something as innocent as people demanding to preserve their park is becoming all out civil disobedience against the AKP rule. Thousands across the country are pouring onto the streets. Many in Ankara did not sleep on Friday night joining in support of the protesters in downtown Istanbul. While thousands still remain on the streets in Turkey’s capital today, they also continue to come under heavy police tear gas and pepper spray attacks. Adnan Keskin, a CHP deputy, said on a Turkish television channel, “A girl named Aylin was run over by a police riot van near Akkopru, Ankara,” on Friday evening. [Al-Monitor has so far not been able to independently verify this information.]

It is also impossible to verify all the information presently on social media — Facebook and Twitter — which suggests there are thousands of arrests not only in Istanbul but across the country, and that there are many more injured and possibly deaths. There are some claims that 5 or 6 people have permanently lost their eyesight due to pepper spray. At the time of writing this article, the news of the police crackdown on protesters continues across the country.

Erdogan, however, still prefers to blame the opposition for what has been happening in the country. Defining the protesters as engaging in “illegal, anti-democratic” activities, he says, “No one has the right to raise tension in Turkey with an excuse that trees are being cut down.” He continues, “We have not accepted till today, and will never do, to close our ears, suppress the minority or put them under pressure.” Erdogan also said that the people can only raise their voices at the time of the elections.

The fact of the matter is that his style of governance — speaking with a high-pitched voice, being critical of the country’s history and the political parties before him almost at all times — seems to have reached a saturation point on the streets. People are not able to tolerate this aggressive style any longer. This park protest is an excuse of a bigger anger explosion to Erdogan’s decade-long rule and proof that the prime minister needs to make changes in his political culture. While it is doubtful that he can change his one-man show — or that only his party knows what is good for the country and that the opposition has no mind to think anything good for the nation’s future — has pushed people further apart from each other. Polarization has significantly become a subject of social debate. Whether the opposition has performed better or not is not and should not be an excuse to cover up bad governance — let’s say specifically on the issue of the planned construction of an Ottoman Artillery Barracks at Taksim Square.

Erdogan claimed in his speech that the CHP had approved the project. But Deniz Zeyrek of Radikal daily told Al-Monitor via Twitter that Kadir Topbas, Istanbul mayor, said on Friday that the CHP has only given approval for the pedestrian project — not the construction of the Ottoman Artillery Barracks.

Last but not the least, when massive protests on the Turkish streets took place in April 2007 — protesting Abdullah Gul’s appointment as president — the Bush administration chose to dismiss the crowds and continued to praise the Erdogan government as a model for the rest of the Arab world. The Obama administration followed suit, and the president of the United States named Erdogan as one of his top five friends. The Turkish prime minister has just gotten back from a visit to the White House. While the US administration expresses concern of the police using excessive force on the protesters, these pictures coming out of Turkey might have cast doubt on how it was wrong to promote a democracy agenda with the Islamist camp. Hundreds on Ankara’s streets last night were chanting, “Erdogan go to America, join Fethullah Gulen.” Right or wrong, Turks are convinced that the US administration considers Erdogan as an indispensable ally for this critical time of transformation in the region — not Turkey!