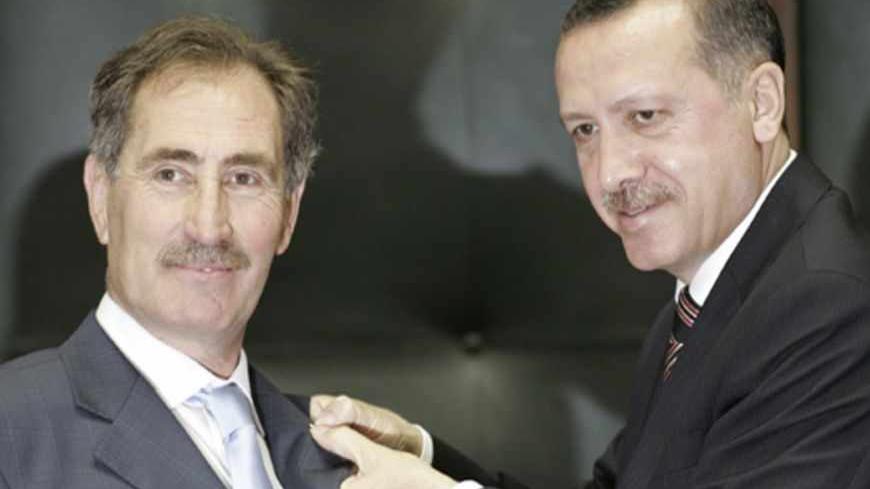 “Goddamn that person who attacked a woman because of her headscarf!” Ertugrul Gunay — former minister of culture in the Justice and Development Party (AKP) between August 2007 and January 2013 — tweeted today [June 14], referring to an incident that Prime Minister Recep Tayyip Erdogan related by condemning all the protesters for being against religious sanctity, as if they were responsible as a group of such wrongdoing.

Allegedly, the daughter-in-law of an AKP mayor was terribly assaulted on June 1 by a group of Gezi Park protesters at Kabatas port in Istanbul, while she was also carrying her 6-month-old baby. No injuries to the baby were reported. “They will pay the price of [attacking our girls with headscarves!],” Erdogan vowed on Tuesday [June 11], while talking about this incident — which Gunay strongly condemns in his tweet.

But the former culture minister also concluded his tweet with the following: “Leave those to God, who made so many mothers cry just because of constructing an Ottoman building in a park.” And that statement is — without openly uttering the name — directed to Erdogan, and no one else.

This is certainly not the first time that Gunay took a position against Erdogan regarding the construction of the replica of the Ottoman Artillery Barracks at Taksim Square in Istanbul. There has been much speculation in Ankara’s beltway that he actually lost his job as minister of culture because of his opposition to this Taksim development project.

In an interview with Milliyet daily on Nov. 20, 2012, for example, he made his objection public. “Our ministry — based on an application in 2011 — confirmed looking at photographs of such a building present there. But we lacked any kind of institutional knowledge. We only had a few photographs. The picture that is now served to the press as the original picture of that [Ottoman Artillery Barracks] is actually a modified construction,” he said. “Because the real construction, as seen on the original photographs, is clearly an experimental architecture work of Krikor Balyan’s Russian-India synthesis. It does not flow with Istanbul’s historical city look, and there is no second building like that in the entire city [and country]. You can find similar constructions in Moscow. I took many photographs. It has those onion towers. There is no other building in Istanbul with those onion towers. This was just an experimental building.”

For that experimental construction to be built once again — thanks to Erdogan’s stubbornness — at least four people died, 12 lost their eyesight permanently because of tear gas canisters hitting them in the eye, more than 5,000 are injured and about a dozen are in critical condition, according to data provided by the Turkish Medical Association, since the protests to counter the government’s proposed construction project started on May 27.

And since then, Erdogan’s slogan of “change” to a “new Turkey” has turned out to be a “bloody change,” reflecting those dark chapters of the deep state that terrified people especially in Turkey’s Kurdish areas while the military conducted its most intense fight against the Kurdistan Workers Party (PKK) in the 1990s. This time though, all is taking place in the open as the international media turned the spotlight onto excessive use of force by police. Although these protests are testimony that the chain of fear which kept people silent is broken, it is easy to be afraid of one’s life with so much tear gas and pepper spray. These protests have taken away Erdogan’s innocence of a democracy champion to a point of no return.

While Erdogan aims to write history by resolving the country’s chronic Kurdish issue, the process with the Kurds seems to be on track with no disturbance — for now. For a change, it has been very quiet in the eastern part of the country, while western Turkey is a mess — where Erdogan tries to paint an image that terrorists, different kinds this time, have turned to the streets fighting the police in an attempt to overthrow his government. That aside, there are riot vans on the streets of Ankara and Istanbul, originating from the majority Kurdish populated areas such as Diyarbakir where there has been no protests.

Konda, an independent public opinion research firm, however, gave a context to all that has been discussed on the profiles of those protesters in Gezi Park, Istanbul. Based on research conducted on June 6 and 7, questioning 4,411 people, Erdogan’s allegation that the opposition organized these events are proven false. According to poll results, 79% of the protesters have no registration in any political party or nongovernmental organization, 50% came out into the streets as a reaction to the police’s excessive use of force, 39% made it clear that they are demonstrating to protect their individual freedom, 18% said they are taking a stand to prevent further “right violations” and only 9% said they want the government to resign.

What all of this tells us is that Erdogan is disconnected from the reality in the street, and that he really pushed things over the edge to prove he has power. If this is not sign of a leader carrying authoritarian instincts, what then is it? That said, a Pew research poll conducted in March showed Erdogan's approval rating as high as 62%. And it makes it even more worrisome that he was only willing to meet with the members of the Taksim Solidarity Group (TSG) — composed of a mixed bag of academics, architects and environmentalists — last night [June 13], at a late-night meeting which started at 11:35 p.m. and lasted for three and a half hours.

The meeting raised hopes for an exit from this crisis.

Protesters would decide tonight or over the weekend how they would proceed with their resistance to the Erdogan government’s policies. The result of last night’s meeting between the prime minister and the TSG, however, looks quite confusing.

The only real achievement was the government announcement that it would abide by an Istanbul court decision, which put a precautionary hold on this development project. “There is a court order over Gezi Park,” Huseyin Celik, AKP spokesman said after the meeting between Erdogan and the TSG had wrapped up. “Even if the final court decision is in our favor, we will conduct a plebiscite to hear directly from the people. … There have been requests from time to time regarding the issue of excessive use of force.

"Our government is also in agreement [that it is wrong to use excessive force]. Public servants cannot take the initiative to act above the law. We started some investigations.” He added, “Turkey's prime minister worked for over 18 hours. If this were not a democratic country, it would not be like this. The government has acted with much tolerance. I don’t believe that the government will allow Gezi Park to remain under occupation for much longer.”

In that case, the prime minister is only recommitting himself to abide by the rule of law — as he is obliged to do anyway — while giving the protesters one final warning to evacuate the park. But he could have said this clearly on the day when the court announced its decision, instead of emphasizing this after the court decision that he would continue with the project.

Lives could have been saved and Turkey’s image would not have come under a cloud. But it seems as a leader who has not been seriously challenged at the ballot box since he came to power more than a decade ago, these young protesters really made Erdogan worry — and despite his strong approval rating he has taken the country already to election mood — out of doubt for himself.

As if he has not delivered enough speeches yet, he says that he will settle scores with the protesters at the upcoming local elections in nine months. He will be holding a rally in Ankara tomorrow [June 15] and in Istanbul the following day to prove who rules the streets by numbers. Turkish media reports that Erdogan will soon start a nationwide tour holding at least 30 rallies — which is nothing but an intimidation tactic. Not only did his police use disproportionate force but he is also reacting with exaggeration to a crowd that has no party affiliation.

The Gezi Park protests will hopefully end soon and common sense will prevail. But Erdogan’s glorious days may be over — and he may know it — since he is holding so many rallies across the country, playing up the "religious victimization" and trying to convince people that he is not afraid of the protesters. But these young people will never give him the guarantee of not coming to the streets again, should he continue to disregard their demands and disrespect their existence.

Last but not the least, it is absolutely tragic for Erdogan to turn one very unfortunate incident regarding an attack on a woman with a headscarf into a representation of society as a whole.

The AKP base has not yet expressed any real concern about women with no head cover who suffered from police brutality in the past two weeks. It is always about those with head cover for them, who suffered from anything, no matter how insignificant — even at Gezi Park demonstrations. The only thing they care to talk about is that they will not allow these crowds to defeat Erdogan. If they continue like this, these policies will continue to divide and polarize society.

After all, it was Erdogan himself who said, “This Tayyip Erdogan does not change.”