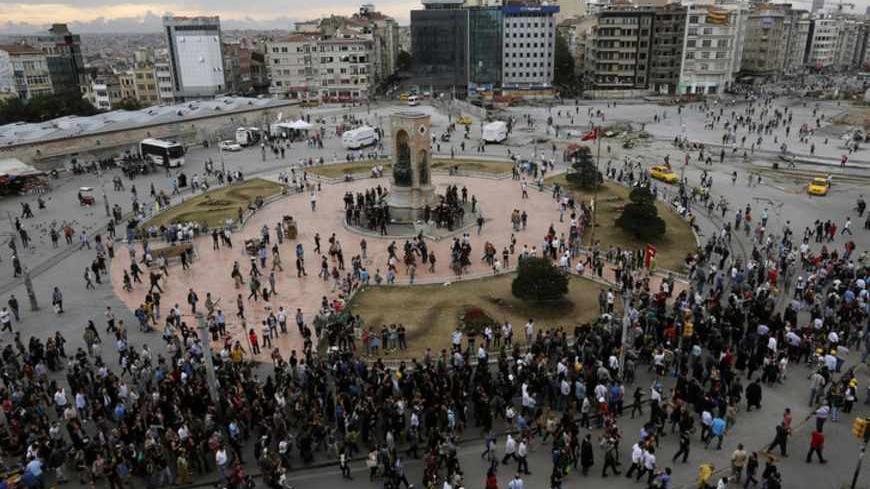 It took 17 days for Turkish Prime Minister Recep Tayyip Erdogan to finally meet representatives of Gezi Park protesters, but two points made it questionable even before it got started: Erdogan asked today, June 12, for his interior minister to end the protests within 24 hours, and the police carried out last night, June 11, probably the most intensive crackdown at Istanbul’s Taksim Square since the demonstrations started on May 27.

The Turkish Medical Association reported that about 2,000 people were injured at last night’s events. As a result, Taksim Solidarity Group (TSG) canceled its attendance at the meeting and stated that those who talk to the prime minister cannot represent them. “While police violence continues at Gezi Park and its surroundings, these meetings won’t provide any results,” TSG said.

The meeting with Erdogan and those protesters — who openly stated that they do not have the authority to represent people at Taksim or elsewhere in the country — lasted five hours. Deputy Prime Minister Huseyin Celik, announced that Erdogan will take the issue of the Gezi Park development project to referendum. Ipek Akpinar, who spoke on behalf of those attending the meeting, however, preferred not to comment on the referendum issue but said they expect the government to take action on police actions that deviated from rule of law and caused injury. Celik, on the other hand, told the reporters that about 90% of those attending the meeting expressed support for the idea of taking the Gezi Park construction to referendum.

As the news broke, the reaction in Istanbul and Ankara remained unclear at first. “Istanbul is an AKP stronghold. By taking this to referendum, Erdogan is making sure that he will win against us again,” one protester told Al-Monitor. Many on the street remain worried about a police crackdown. What is more striking is that as the news of referendum broke out, people in Ankara started to flood the streets in massive numbers; many others remaining at home took to their windows, clanging pots and pans or honking their car horns.

The Erdogan government is trying to portray protesters as a whole as members of marginal groups, with the insinuation that they are being exploited by domestic and foreign provocateurs or interest groups trying to bring down the government, because it has proven to be an exceptional success in the last decade, both in advancing the country’s democracy and growing its economy since coming to power. But many iconic pictures, which showed the protesters overwhelmed by the police's excessive use of force, tell the story on its own for the world to see.

The image that comes out of Turkey is that people who do not vote for the AKP are today’s victims. A prime minister who has been lecturing the international community about its lack of leadership, as well as conscience and morality when it comes to the Syrian crisis, is being put to the test in real time to prove his humaneness in how he treats his own people. This is most certainly not to equate the crimes of Syrian leader Bashar al-Assad to Erdogan’s bad management of the street protests here — but the fact is that Erdogan has presented himself as a world leader who can help resolve the conflicts in this region. Although he has not proven any concrete success so far, this whole situation has shaken Erdogan’s image as a tough-talking but honest and well-meaning leader who could guide the Arab world in transition to democracy.

All this big talk and expectations of him, however, have been questioned even by some of his supporters, who are confused with the police’s excessive use of force and the prime minister’s harsh rhetoric that has helped keep the tension high on the streets. “I really don’t understand how things came to this,” an AKP insider told Al-Monitor. “The party won’t be divided over this, but we also don’t understand why things are pushed so much to the edge.”

Umit Ozdag, chairman of 21st Century Turkey, an Ankara-based think tank, however, has an explanation. He argues that the reason why Erdogan is choosing to escalate the tension on Turkey’s streets has nothing to do with bad management, but is an election investment. “The prime minister is a smart politician, and he is not taking actions based on his emotions,” he told Al-Monitor. “Just as they started the process of taking the constitution to a referendum on Sept. 12, 2010, they had the backing of 42% of the eligible voters, but they ended up with 58% voting in favor.

"They create clear divisions between people, pushing them to take sides. Right now, Erdogan is applying the same tactic, and using religious motives to divide people.”

Ozdag suggests this is why Erdogan keeps reminding the people that he was elected to office with 50% of the eligible vote. He is able to claim that because only the parties that get more than 10% of the nationwide vote can be represented in parliament. The prime minister claimed that protesters went into a mosque with their shoes on, but the muezzin of that mosque has contradicted this. “It really does not matter what the truth is, people believe him,” Ozdag said.

There are a lot of questions about the management of this crisis — but, as Ozdag argues, this could be also a preparation for the upcoming election. “We will settle our scores with you in seven months at the ballot box,” Erdogan said, referring to the protesters on Sunday, June 9 — although the local elections are set for March, that is, in nine months.

It’s difficult to know for sure what the prime minister has in mind, but protesters were not only frustrated by police spraying intense pepper and tear gas yesterday as they entered the square in the early morning, but many were shocked to see a few throwing Molotov cocktails at the police. Despite those gruesome pictures, original Gezi Park protesters were not provoked to participate in this clash between the police and those few men, but they were all heavily affected by the gas.

With that in mind, there is also speculation here that those few who threw molotov cocktails at police yesterday could be a government setup. “Turkey’s state media, which for days had blithely ignored the country’s huge anti-government demonstrations, were on hand to record the event,” Luke Harling of The Guardian, for example, wrote on June 11. “Turkish TV viewers witnessed this: a small group of four or five 'demonstrators' throwing Molotov cocktails at police. … The 'protesters' were in fact middle-aged undercover police officers, staging a not very plausible 'attack' on their own for the benefit of the cameras.”

While it’s impossible to verify such a claim, Erdogan could argue that such reporting is proof that the international media is conspiring against him by providing false information. People may say that they have seen all this before. Some Turks claimed in the past that the military had stage-managed such traps at the cost of risking its own men’s lives to mobilize the public to their favor, and to pre-empt any questions on how they fight terrorism.

Moreover, Ozdag questions why the police intervened at the Taksim Square yesterday. While Istanbul Gov. Huseyin Avni Mutlu argued that it was all about removing banners and flags, he expressed disbelief yesterday [June 11] at how these marginal group members could hang banners on a state building at Taksim Square. “Because we all know that the state has ties with some terror groups that are now active at Taksim Square, Istanbul,” Ozdag told Al-Monitor. “They may easily use them to turn this peaceful protest to look like something else.”

These are surely all allegations and none can be independently verified. But there are lots of questions.

As this article was being written, Erdogan’s meeting with representatives of the Taksim protesters had been going on for more than three hours. Initial reports suggested that the prime minister was making a PowerPoint presentation to the attendees, and not retreating from his demand that the protest needs to come to an end within 24 hours.

The more he keeps with this tone, the streets get more crowded — and it becomes really difficult to see a peaceful ending to this standoff at this stage.