Erdogan: 'We’ve Been Patient For Too Long'

Turkish Prime Minister Recep Tayyip Erdogan has chosen to escalate the tension on the streets with his June 9 speech in Ankara. 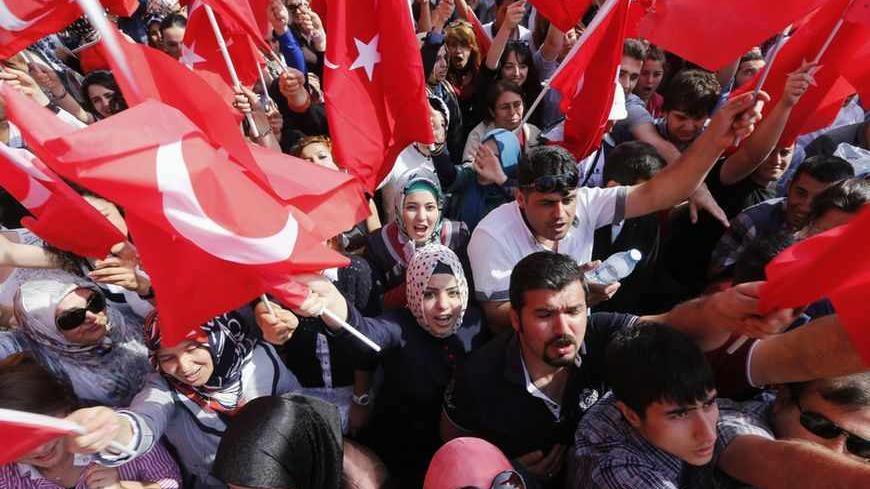 It was a shocking speech — as if Turkish Prime Minister Recep Tayyip Erdogan had declared a war against a segment of his own people, although he often claims to represent 100% of the nation.

“We’ve been patient for far too long,” Erdogan said on Sunday, June 9, upon his arrival in Ankara's Esenboga international airport, addressing thousands who came to support his reaction to continuing protests against his politics. “I’m saying the same thing to all those – one bank, two banks or three banks, whoever is making up that [interest] lobby. As you started this confrontation, you will pay dearly. Those who without shame join efforts to crash the stock market; Tayyip Erdogan does not have money there, if it crashes, you will lose. The moment we catch you doing speculation [in an attempt to crash the stock market], we will strangle you.”

A protest of 500 people that started on May 27 in an effort to save a dozen trees at Gezi Park, Taksim Square, Istanbul, came to this. The people are surely not only protesting to save one of the few remaining green areas in downtown Istanbul any longer, but protesting Erdogan’s growing authoritarian instincts in governing the country. As has always been the case in the past decade, Erdogan remains defiant in face of criticism and avoids a middle road. Otherwise he could have easily understood that these protesting crowds are also furious about the opposition’s failure and their inability to come up with a real contender to challenge Erdogan at the ballot box.

As he strongly believes the people should express their grievances to an elected government only on election day, he said, “Instead of gathering at Gezi Park or Kugulu Park, I am telling you to be patient for another seven months. We will settle our score with you in seven months at the ballot box.” Turkey will go to local elections then.

Prime Minister Erdogan increasingly perceives that the people protesting in the streets are conspiring to bring him down illegally. “We wore our burial shrouds before embarking on this road,” Erdogan said. He is convinced that the protesters have not really come to the streets on their own, but that domestic and foreign provocateurs have goaded them into doing so.

Provocateur, according to Merriam-Webster dictionary, means “one who provokes.” The dictionary further defines “provoke” as “to stir up purposely.” Keeping that in mind, one may argue that there are excessive numbers of provocateurs on Turkey’s streets since the Gezi Park protests started on May 27, if one likes to agree with Erdogan’s characterization of the events.

To begin with, Erdogan has been accusing the main opposition Republican Peoples Party (CHP) of provoking people to come out in the streets to protest the government. Erdogan also warned people to remain alert about the provocations of “extremist elements,” and “terror organizations.” The fact of the matter is that if the CHP were to be able to gather thousands and thousands of people on the streets for 13 consecutive days come rain or shine, that would be quite an impressive success. This protest has gotten out of control because of Erdogan’s bad management and insistence on building that Ottoman artillery barracks at Taksim Square, and today the risk of clashes between his followers and the protesters has tremendously increased. He could have chosen a dialogue that would reach out to those people, but he has preferred to escalate the tension. That clearly needs to be said.

If there is provocation on the streets, it first started with excessive use of force by the police, and the more the prime minister continues to refuse to find a middle way, the more the country may in turn be vulnerable to unfortunate real provocations. It’s really sad that things have come to this because of Erdogan’s never-ending suffering due to the Sep. 12, 1980, coup trauma that banned head-scarved female students from attending university. He keeps coming back to that issue over and over again. “[The protesters] have attacked my head-scarved girls,” he said. But Melek Bilgili, a Twitter user with headscarf, immediately responded. “Enough of you abusing my headscarf,” she wrote in her tweet. “Haven’t gained enough votes by exploiting this? Nobody believes your lies anymore!” In fact, there are many women with headscarves at the Gezi Park. It’s not the people who are making the division, but the prime minister himself consciously trying to divide the country between those who wear the headscarf and those who do not.

While the headscarf issue still remains a sensitive topic in this country, disrespect to mosques could be explosive. “[The protesters] even entered Dolmabahce mosque with beer bottles in their hands, and walked on [the carpets] with their shoes,” Erdogan said. However, Yeni Safak, a daily closer to observant Muslims, wrote that the mosque’s imam denied such reports. The imam “has not seen a person, as alleged, to be holding a bottle or drinking alcohol at his hand” at the mosque’s compound.

The prime minister should know well how this accusation could escalate the current crisis. His decade-long policies, and the weak opposition, are responsible for the unrest on Turkey’s streets. But with this speech, Erdogan made it clear that he wants to pick a fight with those who disagree with him — probably even including those in his party. He is doing his best to divide the nation between his supporters and the others, and increasing the risks of clashes between those groups. Turkey has turned a corner to a dangerous path.