Erdogan, Gezi Park And the Headscarf

Turkish Prime Minister Recep Tayyip Erdogan argues that the Gezi Park protests have to do with the headscarf ban in public places, saying the protesters don’t really know a thing about freedom. 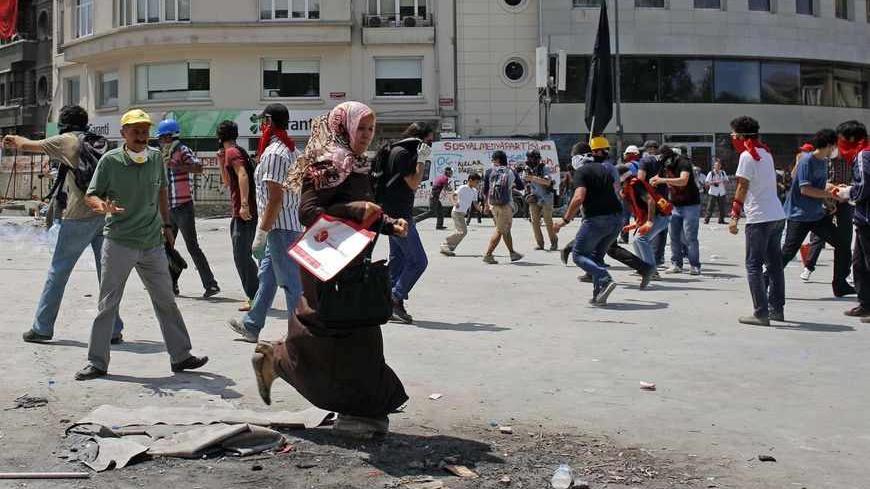 A woman runs as protesters taunt riot police during a protest at Taksim Square in Istanbul, June 11, 2013. Turkish riot police fired tear gas and water cannon at hundreds of protesters Tuesday in an attempt to take back control of the central Istanbul square at the heart of fierce anti-government demonstrations. - REUTERS/Murad Sezer

There is no doubt that the constitution written after the 1980 military coup opened a bizarre page in Turkish history by preventing female students with headscarves from attending public university. But Turkish Prime Minister Recep Tayyip Erdogan’s government has been in power for more than a decade now. And it is getting really tiresome to hear him link every issue to that wrong action, forcing the civilian population who are not AKP constituents to feel individually responsible.

Speaking today [June 11] at his party’s weekly parliamentary group meeting, Erdogan accused those who have not been able to defeat him at the ballot box of trying to find a new way, through the Gezi Park protests, to defeat him. “Although the Gezi Park protests are presented as being innocent … the truth is they’re really far from it,” he said. Erdogan is convinced that there is a foreign plot, in which the international media is playing a significant role, trying to cut short his achievements and therefore Turkey’s development in its democracy and economy.

“I want youth, especially, to understand this. We … as individuals, and as political generations, have passed through some difficult periods,” he said, addressing Istanbul’s Gezi Park protesters. “Many of our people’s lives have been darkened because of their beliefs. Why? In a country whose population is 99% Muslim, our girls could not go to universities with their headscarves. They were forced to go abroad for education. … Does a girl have no right to education because she wears a headscarf? Won’t she get educated? As a father who has gone through this [experience] I know this well.”

What the prime minister does not know is that those protesters at Gezi Park and elsewhere would not disagree with him on this point. Erdogan is giving the Gezi Park protests a meaning they do not have.  “These protesters don’t care about freedom as they’re stepping on the freedoms of others,” he said, apparently forgetting all the protests held for decades after Friday prayers in condemnation of those then in power. The government then, although its legitimacy could have been open to question, did not use such force to disperse the protesters.

The Gezi Park protesters are mostly the younger generation, who have really grown up only knowing the Erdogan government officials ruling the country — and their wives, who  almost all wear headscarves. He could therefore at least give them a break about this issue, as they have shown since the protests started May 27 that as practicing and non-practicing Muslims, neither side really has an issue with the other. They’re all hand in hand, united against a government that constantly claims to know the whole truth and nothing less.

But it seems that hyping religious sensitivity is a priority of AKP members. They seem to be still relying on playing the religious victimhood card, focusing on the mistakes of previous governments, to win votes.

This must be troubling and contradictory issue for Erdogan, who relentlessly argues that Turkey’s democracy has been strengthened under his watch. But it nevertheless is a perfect example to show how the party keeps using religious sentiment to attract votes:

“Thank God for bestowing upon us a leader like Recep Tayyip Erdogan. Tayyip Erdogan, a gift sent by God to this nation, to this country, to humanity; this nation will continue to hold this gift dear,” Egemen Bagis, Turkey’s chief negotiator in accession talks for full membership to the European Union, said in a written statement Monday, June 10. “The Western media made a mistake. They thought Taksim would give rise to another Tahrir. But Taksim won’t create a new Tahrir. They’re not aware that this nation already had its struggle for freedom in 2002. Those who argue that spring has come to our country, they need to understand this: It may be a cold winter in your country, but spring arrived in Turkey long ago. The spring came to this nation on Nov. 3, 2002  [when AKP was first elected to power]. Therefore they should not talk about civil disobedience. If there is a civil disobedience movement in this country, it is AKP.”

Bagis also wrote: “The direction these protests are taking surely did significant damage to our nation and country. But it also led to things that made me very happy. I’m additionally extending my thanks to the prime minister for this. Because some — thanks to our prime minister — have been to a mosque for the first time [in their lives.] While they were not there to follow Muslim tradition, it was nevertheless a step (in the right direction), inshallah.”

Based on one’s political position, everyone may have a different reaction to Bagis’ remarks, and may give him a free ride as political rhetoric has become more and more exaggerated. The point is though, that Bagis and his wife, Reyhan, who does not wear a headscarf or a turban, have never presented the image of a lifestyle that proves their religiosity. In the same vein, it’s truly mind-boggling for someone like Bagis to attempt to cast judgment on people who sought refuge at a mosque to escape police excessive force by saying they have never been to a mosque — apparently just based on their clothing. Otherwise, how would he know whether these people have ever been to a mosque or not? Wasn’t it the AKP that has kept arguing that it has never interfered with people’s clothing or lifestyle choices since it came to power? Also, speaking about those claims is one thing, but creating an atmosphere where people feel under government pressure is another. People on the streets seem to be fed up with the gap between these talking points and actual actions on sensitive issues like religious freedom and the government’s staying at equal distances from all its citizens.

Thanks to Bagis for making the case yet once again that this party is recklessly abusing people’s right to freedom of and from religion, even at a cost of contradicting their own souls.

What is more troublesome is that Erdogan also said that heavy pressure from protesting crowds had forced the imam at the Dolmabahce mosque to contradict Erdogan’s statement that beer had been consumed at the religious compound. This incident at the mosque is what gave rise to Bagis' remarks about protesters visiting a mosque for the first time. Erdogan had said the protesters “entered the Dolmabahce mosque with their shoes on, consumed alcoholic beverage there, and through that acted disrespectfully to this country’s religious sacred places — and in the name of what? Environmentalism.” He added, “You [the protesters] threaten the muezzin, present events differently. What do you claim did not happen? All the video footage is in our hands. We will make them see it, they will see it — don’t worry.”

It was Yeni Safak, a daily close to pious Muslims and the AKP base, that broke the news that the muezzin denied allegations that people had drunk beer in its compound. The mosque, though, was turned into a medical aid station for three days, and the muezzin allowed them to use the space for taking care of injured people. He said very openly that he had seen no one drinking alcohol. The news broke yesterday that the muezzin had departed for his annual vacation for an unspecified duration — which was also denied by the government. All in all, there certainly is one side that is providing faulty information, although lying here is not impeachable. It will, however, be regarded as a higher ground for politicians to know how to turn the page after a traumatic experience so that others could follow suit. But the Islamist camp’s grievance not only seems to have become obsessive, but also seems filled with hatred as well. Such a feeling for any believer should mean darkness for soul – and not be a recommended path for practicing Muslims, at the least.

Last but not least, it has been more than a decade since the AKP came to power. Seriously, when will be the time for the Erdogan government to turn the page over the headscarf issue — will it be when all women are forced to cover themselves? If not, let’s please not overuse this topic just to get more votes out of victimhood. Enough of it!