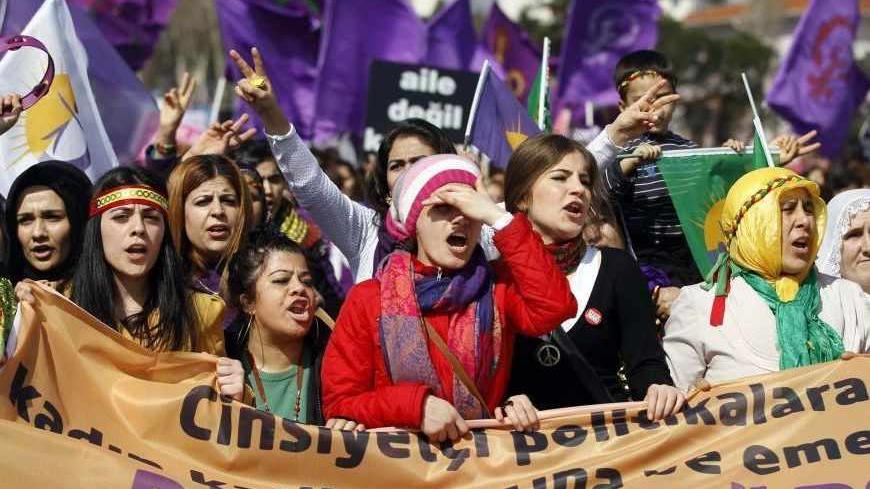 Turkish Prime Minister Recep Tayyip Erdogan revealed how emotionally stuck he is with the Gezi Park protests that took place all throughout the month of June across the nation, when women with a collective voice argued that Erdogan’s policies are aimed at further strengthening a well-anchored patriarchal value system in Turkish society. That system is working against women who dream of living in a country where gender equality prevails, and freedom is not only a topic of intellectual discussion but a way of life.

“They are saying I am interfering in their lives when I call on women to have at least three children,” Erdogan said, addressing a large crowd on Aug. 8 at his Justice and Development Party’s (AKP) Istanbul provincial office. “We have not imposed a legal obligation for this. This is something optional. But I, as a prime minister, am recommending three children. This is my most natural right. We’re not holding a gun to anybody’s head [to have three children].” Erdogan went on to say: “I am calling on those sisters who are devoted to our cause. Come, please donate to this nation at least three children.”

Donate is an interesting choice of word, which Merriam-Webster dictionary defines as, “to make a gift of; especially: to contribute to a public or charitable cause.” Could this really be the way in which the Turkish leadership today views building a contemporary society for 21st century Turkey that a husband and wife decide on expanding their family considering donating their newborns to be raised for a political party or a cause? Even the spelling out of this kind of an approach feeds the stereotypes in which there are fewer men in the Muslim world who view women as equals or partners than there are who see women as being to be dominated.

“AKP’s view of women is completely based on fertility,” Aylin Nazliaka, a deputy with the main opposition Republican People’s Party (CHP) from Ankara, told Al-Monitor. She is a high school friend, and we were having a friendly conversation on women’s issues. “If women have one child, they continue working. If they have two children, they do their best to keep on working despite its challenges [in balancing the responsibilities of the children and the work,]” said Nazliaka. “When there are, however, three children, women stay at home. The position of women, in that sense, [by calling on them to have three children] is described as doing housework and taking care of children.”

Nazliaka argues that there is such a mindset in the Islamist-rooted AKP government officials that “they don’t consider gender equality as being possible,” and that is why they prefer to attempt to minimize the role of women in society as taking care of the family and raising children. She was, for example, quite specific about the troubling numbers of data concerning women. “Among the 34 OECD (Organization for Economic Cooperation and Development) member countries, Turkey ranks last in providing employment to women,” she said, and moved onto drawing attention to a more striking figure. “According to the latest survey results, 91 out of 100 newly unemployed are women.”

In other words, Nazliaka was drawing attention to how the Erdogan government’s strategic thinking was focusing solely on increasing the population number, but not the quality of their life standards.

But Erdogan keeps on talking and demanding that women shoulder the burden of all the challenges of raising a big family, as if in today’s world it’s an easy task to do.

That said, it's true that Turkey’s population growth is declining.

According to Turkey’s Statistical Institute, Turkey’s population is getting older, or at least the proportion of people under 17 is declining. In 2012, Turkey’s youth constitute 30% of the population, while it was 45% in 1935. The report also says that the highest fertility rate in the country is in southeastern Anatolia, where mothers have an average of 3.42 children, while women in the western Marmara region have an average of 1.55.

The prime minister, however, insists that women should give birth to at least three children when at a time the fertility rate in the country continues to decline.

In fact, in a joint report by the United Nations Populations Fund (UNFPA) and the Turkish Industry and Business Association (TUSIAD) in November 2012, the issue of Turkey’s declining population growth rate despite the increase in number of working-age population until the end of 2040 was presented as a “demographic window of opportunity.”

“It has been estimated that Turkey’s working age population, which is some 53 million, will reach its all-time high of 65.3 million in 2041, and  the demographic window of opportunity will start to close from this date on,” the report said. “Turkey should put more emphasis on women’s and youth employment for those groups to benefit from the demographic window of opportunity.”

Put simply, the union of a man and a woman should be about their happiness, and establishing healthy relationships — not about approaching them as being reproduction machines.