Erdogan’s "at least three children’’ campaign is no different than fighting windmills. 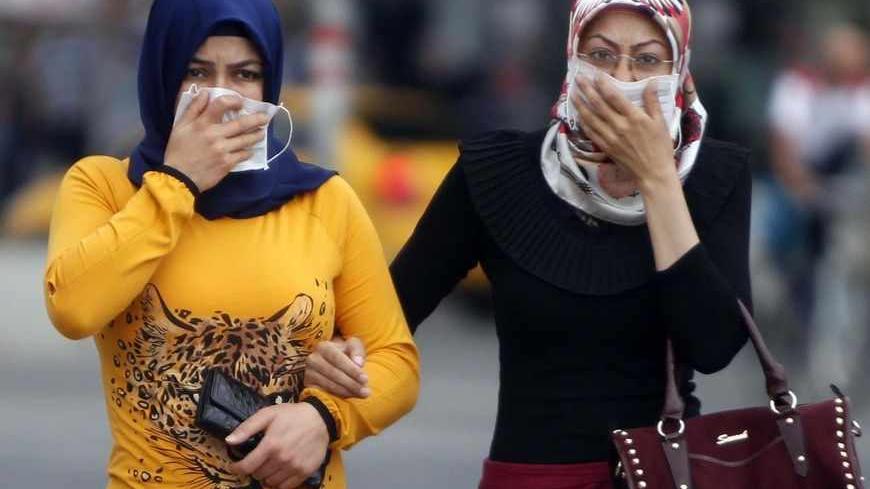 Women cover their faces as they try to avoid tear gas during protests at Kizilay Square in central Ankara, June 16, 2013. - REUTERS/Dado Ruvic

During the 15 days the AKP government pulled out security forces from Gezi Park and its environs in Istanbul and left the park to protesters, the young people there used also humor to express their reactions to Prime Minister Recep Tayyip Erdogan.

One the most memorable protests was by three young protesters holding a placard saying, “Hey Erdogan! Do you want three children like us?” They had it photographed and shared it via social media.

There also were many indications during the Gezi protests that Erdogan’s using every opportunity to advise women to have at least three children played a role in the anger against him.

Forefront feminists and urbanized, modern women resented Erdogan for telling them how many children to have and saw it as patriarchal, patronizing attitude. Still, Erdogan continued the “at least three children” campaign after dispersing the Gezi protests with police forces.

On June 19, while delivering a speech in Ankara at a ceremony to launch the “To Be a Family Project” from the Ministry of Families and Social Policies, Erdogan explained why he wants mothers to have at least three children; this offered important clues to his mindset:

“They operated birth-control mechanisms for years in this country. They nearly castrated our citizens, our people going as far as using medical procedures. This is what cesarean section is all about. While they were doing that, it was like committing murder. They fooled people. They said, ‘You are going to die; we are going to save you.’ But their goal was different. … Their objective was to reduce the population of this nation and for this nation to lag behind in the competition of nations. We are disrupting this game. We have to. That is why there is much to do by our families.  I am especially calling on mothers, on our women. You are the primary force to disrupt this game. You have to take a stand.’’

It is understood that Erdogan believes that in “the past there were internal and external enemies who wanted to expunge this nation with birth control policies.” His reaction to these “enemies” assumes proportions of “paranoid nationalism.”

This is nothing new.  If we go back, we read that in a 2008 panel meeting in Anatolian city of Usak, on the occasion of World Women’s Day, he advised, “At least three children.” He said: “I am not talking to you as a prime minister but as a pained brother.  We must preserve our young population as is. In an economy what counts are the people. They want to obliterate the Turkish nation. This is exactly what they are doing. Have at least three children to keep our young population intact.’’

Erdogan also opposes abortion and cesarean sections. There are news reports and claims that there are efforts to make performing abortions and caesarean sections impossible, particularly in conservative Anatolian towns.

The Union of Chambers of Doctors of Turkey said in a Jan. 18 statement that the decision by the AKP government that abortions can only be performed in state hospitals and by specialists aims at restricting access to abortion.

Here we have to note that Erdogan, as a father of four, is an example of a leader who matches his message. Erdogan doesn’t confine his suggestions and teachings on how many children mothers should have only to citizens of this country. We remember that our prime minister told the Kazakhs, Central Asian cousins of Turkey’s Turks, that he wants “at least five children” from them. In May 2012, Erdogan told journalists covering his visit to Kazakhstan that he told then-Kazakh Prime Minister Karim Masimov, “You know I ask for at least three children in Turkey. Here you should ask for at least five.”

Erdogan went on about Kazakhstan and its people: “They have adequate financial resources. At the moment the size of the land they have, the area they cover, is not in accord with their population. But we agreed on it. He himself has three children but only for the time being. We spoke as a family, comfortably.”  There may be more than one reason for Erdogan’s long-lasting “at least three children’’  campaign and his opposition to abortion and caesarean section.

An “at least three children” policy, by keeping the ratio of the young population high, could prevent labor from becoming expensive in time and as such preserve the competiveness of Turkey’s industry. In that sense it could fall in line with the government’s economic policies, termed to be to be neoliberal.

Here, let’s note that at the Ankara ceremony, Erdogan said: “Let’s never forget that what makes us strong is our young and dynamic population. The secret of success in the economy is the people; all the rest are their derivatives.”

Opposing abortion and cesarean sections, as much as encouraging population increase, could be related to an Islamic agenda of defending religious and conservative values and ensure their dominance.

Some skeptics could even charge that the ruling party is resorting to “a weapon of demographics” in line with its social engineering policies. But none of these change the fact that population increase has slowed down in Turkey and that the Turkish population is becoming aged.

Erdogan has been saying “three children” since 2008 and his government is pursuing policies that encourage population increase. Despite all those efforts, the population rate increase that was 1.35% in 2011 fell to 1.2% in 2012. According to the official Turkish Statistical Agency [TUIK], Turkey’s population,  calculated at 76 million, will go up to 84 million in 2023 and will peak at 90.5 million in 2050 and then begin to decline.

Naturally, the population planning policies implemented in Turkey from the 1970s until the beginning of the 2000s had a key part in reducing the number of births. But one wonders if Prime Minister Erdogan is aware that he is trying to combat socioeconomic trends such as the migration to cities from rural areas and rapid urbanization that, after all, helped him to gain power? In year 2000, 64.9% of Turkey’s population lived in cities. In 2012, that number was 77.2%.

The inevitable consequence of all these trends is an increase in education and income levels and a tendency to have fewer children.

Erdogan’s persistent demand in a conspiratorial and nationalist style for women to have at least three children despite the powerful socioeconomic changes in Turkey is not any different than fighting windmills.