The increasing number of children left to state care in Turkey raises fresh questions over President Recep Tayyip Erdogan’s call on families to have at least three children. 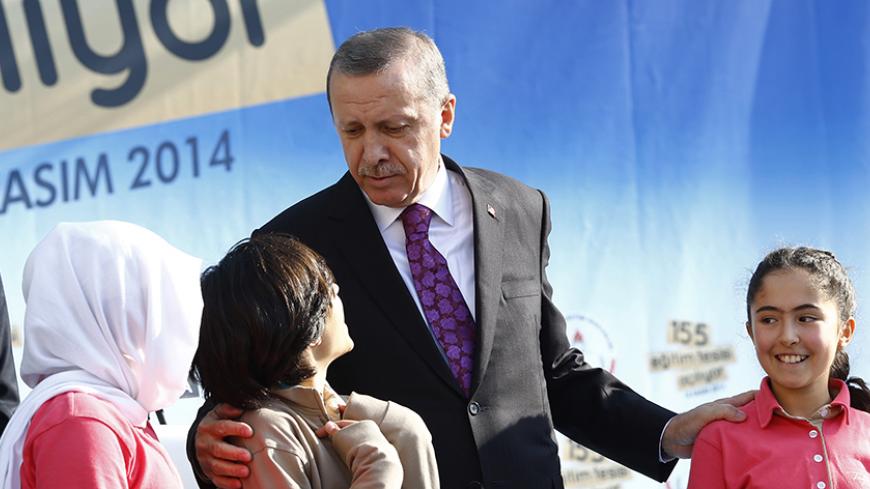 For the past seven years, President Recep Tayyip Erdogan has called on Turks to have at least three children. Those who have heeded his advice, however, seem to be in dire straits as many have left their children to state care.

According to the Ministry of Family and Social Policies’ Children Services Directorate, state support was requested for 6,977 children in the first five months of the year. The government is now providing financial assistance to their families. The total number of children for which families receive financial support reached 62,995 in May, up from 56,018 at the end of 2014.

Erdogan made his first call on families to have at least three children in 2008, sparking a heated public debate. In those days, the cost of raising a child from birth to school age was estimated at at least 4,000 Turkish lira per year (around $3,200 at the time). Government officials attending wedding ceremonies made it a habit to conclude their congratulatory remarks with the “three children” reminder.

How are people supposed to raise three children in a country where millions live under the poverty line?

On social media platforms, some joked three children were “no problem if Erdogan is to look after them.” The situation today shows the care of many children is left if not to Erdogan then to the state he represents.

Why was a baby boom necessary? Speaking on International Women’s Day, on March 8, 2008, Erdogan said, “I’m speaking to you not as a prime minister but as a concerned brother of yours. We must preserve our youthful population. The human factor is essential for any economy. Some want to uproot the Turkish nation. To preserve our youthful population, have at least three children.”

And who were those who wanted to uproot the Turkish nation? No official answer was provided, but on social media platforms people suggested the call was prompted by the Kurdish community’s higher population growth rate.

A year later, Erdogan sought to justify his call with figures illustrating how Turkey’s population was aging. Speaking at a gathering of the Seniors’ Council Association, Erdogan said the 21st century would be “the century of the elderly,” stressing that the number of senior citizens in Turkey — 6 million at the time — would increase to 9 million in 2025 and 18 million in 2050.

And to those who argued that Turkey should focus not on the number but the quality of its children's upbringing, Erdogan said, “The world’s top five-richest countries [by gross domestic product] include India, China and Japan. Do you think their average livelihood conditions are better than ours? No, they are not. We are aware of all [these issues]. The government has the responsibility to take measures.”

Following the verbal encouragements, financial incentives were introduced in the run-up to the June 7 general elections. Under a law approved in April, families were entitled to one-off assistance of 300 Turkish lira ($108) for the birth of their first child, 400 Turkish lira ($144) for the second and 600 Turkish lira ($215) for the fourth and any further children.

In fact, the first incentives had been introduced in 2013 in the form of flexible working hours and kindergarten support for working women, who represent the group with the lowest fertility rate. Under the scheme, the government currently pays the fees of 1,955 children attending private kindergartens.

Yet, in spite of all encouragement and incentives, poverty remains the biggest obstacle in the way of efforts to increase the birth rate.

In addition to 62,000 children in foster care, 12,171 children are currently in state care facilities of various names such as nurseries, orphanages, “houses of love,” children centers and child support centers. The number of children adopted over the past five years stood at 13,825 in May, including 179 adopted so far this year.

In the meantime, foster care has become a “new line of work” as the government seeks to decrease the number of children in orphanages and expand the foster care system. Foster parents receive monthly payments of 420-824 Turkish lira ($149-292) per child. According to ministry statistics, 4,283 children were in foster care in May. The number of foster families, meanwhile, stood at 3,514, up from 3,283 at the end of 2014.

In another move to boost the birth rate, the government enacted measures to curb cesarean section births, as Erdogan went on to slam abortion as “murder” and ministers preached that “motherhood is the greatest career” for women.

It seems the quest for a youthful and dynamic population takes more than calls for more babies and patronizing talk.

Hasan Gemici, former state minister for social affairs, says the government’s approach has been fundamentally flawed from the very beginning.

“The three children project was wrong from top to bottom. Population growth in Turkey is a completely different affair, linked to social issues caused by the migration wave from rural to urban areas,” Gemici told Al-Monitor. “The encouragement of population growth in a country where children already lack proper education and health care has added a heavy burden on Turkey. One has to take rational measures.”

Yes, rationalism. A proper consideration of the country’s economic and social conditions when drawing up projects. That’s what the three children campaign seems to have lacked. Seeking to scare people with the argument of “others overtaking us” is not enough.