The Justice and Development Party government is offering incentives to encourage university students to get married before graduation and to have more than three children. 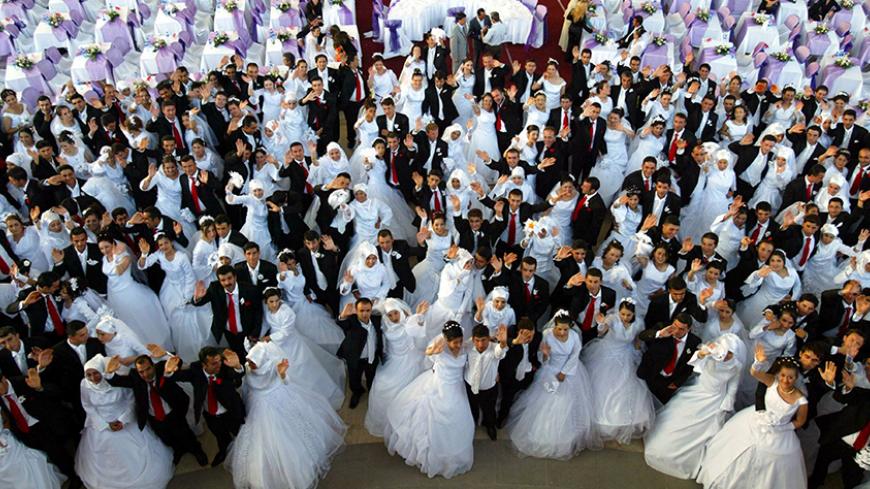 Brides and bridegrooms wave on the stage as they wait for their wedding ceremony in Ankara, Aug. 6, 2006. - REUTERS/Umit Bektas

The latest promises of financial incentives by the Justice and Development Party (AKP) government and Prime Minister Ahmet Davutoglu aim at getting young people to marry before graduating from university and produce at least three offspring.

The objective appears to expunge women from economic and social life, and confine them to the home by offering them attractive economic incentives.

The controversial suggestion by Health Minister Mehmet Muezzinoglu that “women should not focus on any career other than the career of motherhood” is one clue to the goal behind the campaign.

The first indication to disconnect women from productivity, cultural life and from being equal members of society was initiated by President Recep Tayyip Erdogan when last year he addressed the girls of the Service for Youth and Education Foundation of Turkey (TURGEV), an organization managed by his son. Erdogan who was then prime minister told the girls: "Don’t delay your marriage. Decide quickly and marry while you are studying or immediately after graduation — the minute you find your destiny [kismet]. Don’t be too selective. If you are, you won’t achieve it.”

Immediately after Erdogan's remarks at TURGEV, the Ministry of Families and Social Policies announced a subsidy of 10,000 Turkish lira ($4,000) to couples that marry early.

The Ministry of Youth and Sports announced that university students who are married will not have to repay their student loans received from official bodies as they will be considered grants and their debts will be erased. In addition, married couples attending university also would not be charged for hostel accommodation. Reports state that until now about 3,000 university students have married and have applied for these incentives.

An additional carrot was offered by Davutoglu who said home savings accounts will be offered to young married couples, with the government adding 15% to the amount saved in five years, if the account remains untouched. If the money in the account is taken out within four years, the subsidy will be 10% and it is reduced to 5% if used in three years.

The most striking incentive by the government for early marriage and having at least three children is the offer of a dowry account and the pledge of gold coins, which would increase with the number of children. When a young couple has a baby, they can open a bank account and when the child reaches the age of marriage the government will add 15% to the account's balance.

Another promise Davutoglu made in a series of incentives was to reward childbearing mothers with gold coins. Davutoglu explained: “Each mother after giving birth will receive 300 lira [$120] as a gift from the state. That equals half a gold coin. This gift will be [increased to] 400 lira [$160] for the second child and 600 lira [$240] for the third. It will be the state that will pin the first gold coin on the mother and the baby.”

The prime minister also announced that working women will be allowed to work for 4 hours a day on a full salary for at least a year after birth and will be guaranteed employment. Davutoglu’s promises were received with indignation by women organizations, labor unions and employer associations. Women organizations say the idea is to keep women at home, remove them from economic and social life and allow them just to bear children.

The AKP's approach that insists the ultimate career for women is giving birth will reduce the number of women in the workforce, because it is likely that employers, who will have to foot the bill for this, will refrain from hiring women who will be working for 4 hours a day for one year on a full salary.

This unusual incentive means that women who produce three children successively will be receiving a full salary for half a day's work for 3-4 years. This undoubtedly will add to the cost of hiring female workers. According to the latest available statistics from October 2014, the overall unemployment rate was 10.4%, and 13.3% for women. Female employment in Turkey is known to be about one-third of male employment.

These incentives show light on the AKP's vision of women in the "New Turkey": They are encouraged to marry young, even while in university, and produce at least three children in return for gold coins offered by the state.

According to some theologians close to the AKP, girls can get married once they reach the age of 6. The goal behind providing state-sponsored financial assistance to students who marry and to mothers who give birth, even when they are themselves still a child, are to confine girls and women to the home and distance them from society.

The objective of the government’s polished election package is to increase the number of women who stay at home after getting married and not pursuing a career after graduation — women with no interests other than bearing children who believe this is their ultimate career goal.

To increase the number of illiterate and oppressed women, severed from productivity and working life, is thus emerging as the secret political agenda of the AKP’s policy of Sunni political Islam.

In its new draft bill to determine the minimum wage, the government declared that workers “whose spouses don’t work, have at least three children and are employed at minimum wage” will not be subject to income tax.

But doesn’t this requirement for a nonworking spouse and having at least three children compel a five-member family to live at minimum wage constitute a serious contradiction?

It appears that the AKP government with the incentives for early marriage is not only planning to achieve its goals of political Islam, but also to have access to the money in the home savings accounts to ease the country’s economic bottleneck on the eve of the elections.

Turkey’s total household debts were 6 billion Turkish lira ($2.4 billion) when the AKP came to power in 2002. In 2014, that amount is a staggering 345.5 billion Turkish lira ($139 billion). According to the Union of Banks, 3 million people are facing legal action for forfeiting on their bank credit debts and credit card accounts.

The question now is how honest and effective it is to promise 15% state support to young couples who do not touch their savings accounts for five years or until their children get married 18 years later?