Forget online dating, now the Turkish government will find you a spouse

Struggling to recover decreasing youth support for the AKP, Turkish Prime Minister Ahmet Davutoglu gambles on the sexual frustration of bachelors by promising to play matchmaker for the desperate. 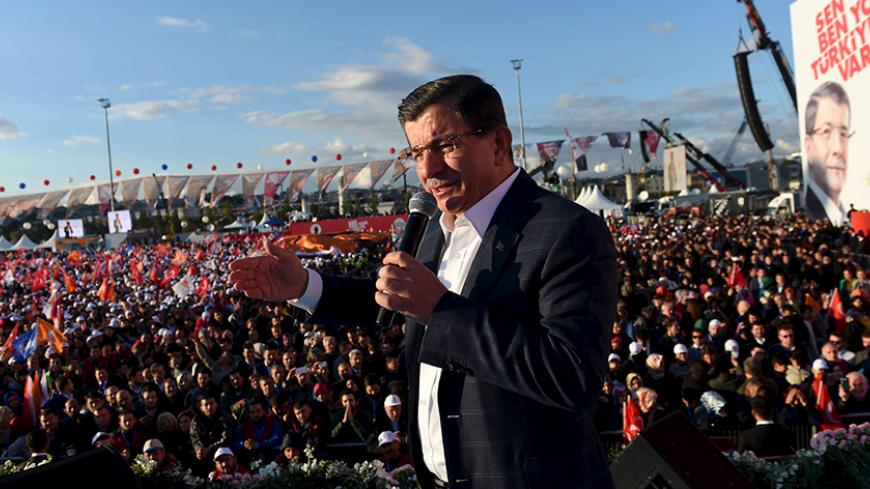 Turkish Prime Minister Ahmet Davutoglu has hit a bit of a rough patch lately, perhaps reflecting the Justice and Development Party’s (AKP) difficulties. His latest awkward encounter with the public came in an Oct. 22 speech in which he offered the government's services as a marriage broker.

"You have a job, a salary and a home. Now it's time for a spouse. We want people of this land to be bountiful. We want you to procreate. First, seek the help of your parents to find a spouse. God willing, this will work out. If it does not, apply to us. We will find you a blessed spouse."

As expected, Davutoglu’s extravagant promise generated an uproar in the print and social media. There were hundreds of comments on Twitter; here are a few humorous ones:

And, of course, there were quite a few op-eds mocking Davutoglu’s marriage promise and dozens of satirical caricatures about his esoteric promise. At the time of this writing, there were already 24 pages of commentary on the famous Eksisozluk (an unofficial, collaborative online dictionary for entertainment purposes). Some of the cartoons portrayed Davutoglu as a pimp or as a host on a matchmaking show.

Indeed, becoming a matchmaker is precisely what Demirtas advised upon hearing of Davutoglu’s bold promise.

“I really like Davutoglu. I hate to see him suffer. We are working hard to help save him from his misery. If we increase our vote share, Davutoglu will be spared from this torture. He is suffering at the hands of the president [Recep Tayyip Erdogan]," Demirtas said at a recent gathering in Mus. "I have humble advice for him: Leave politics and get a job on the dating shows, since you are already in the business of finding matrimonial happiness for singles. Don’t waste yourself in politics. In matchmaking shows when they tell people, 'Davutoglu will find you a spouse,' that would serve a greater cause, a blessed purpose.”

Selin Sayek Boke, deputy chairwoman of the Republican People’s Party, the main opposition party, asked, “Davutoglu promised young men a wife, but from where will he provide the supply of spouses? He did not declare the source of this promise or other extravagant promises.”

Joking aside, there are two plausible arguments to answer the question, “Why would Davutoglu resort to such outrageous promises?”

One is that Davutoglu is in a state of panic and is mentally exhausted, hence producing gaffe after gaffe:

A good number of commentators believe Davutoglu, an academic by training, has slips of the tongue so frequently because he is losing his grip on reality. But there is another crucial possibility behind Davutoglu’s intoxicating suggestion of finding spouses for desperate singles.

After the June 7 election, polling agencies revealed that the AKP has been losing the youth vote. AKP bigwigs have acknowledged this problem and have struggled to remedy the situation. Indeed, Al-Monitor brought this matter out in the open in July for the first time: Young Islamist men are depressed because they can no longer compete in marriage markets. While pious young men have shared their appreciation for Al-Monitor’s candid reporting, middle-aged, married AKP elites have expressed their dismay. However, Davutoglu’s wild promise has made this open secret undeniable. Indeed, the AKP has been working for a while to court and win first-time voters.

The strength of the youth vote is significant in Turkey. Between the August 2014 presidential elections and June 2015 general elections, 1 million people became eligible to vote for the first time. Between June and November, 300,000 more joined the ranks.

Some of the AKP's promises to young voters have included free Internet, free health care for high school and college students, reducing the age to run for office to 18, waiving exit fees on passports and any taxes for the first three years of their employment, providing lavish investment credits and providing salaries for the first year of employment to encourage employers to add staff. Parents are encouraged to save for their children, as well, in a system where the more you can save, the more you will be rewarded. For example, the government will contribute 20% to wedding savings accounts, and if you can save 25% of your down payment for a house purchase, the government will contribute 15% on top of that.

The AKP has been trying to re-energize its frustrated youth base. Abdurrahim Boynukalin, the AKP's youth branch chief and Istanbul deputy, gave a passionate speech Oct. 19 to the youth in Mersin province. He commented that the AKP youth have been criticized for losing their voice and presence on the streets, of acting sheepish. He urged the youth to get active. Boynukalin confessed he takes pride in his controversial method of protesting against media outlets. The events have led to outbursts of violence, yet on Oct. 28, Boynukalin appeared at an event right next to Davutoglu, reiterating his determination for scrutinizing the press and his passion for youth rallies.

However, Boynukalin's passionate speeches have failed to convince all of his audience. Ahmet (who would give only his first name), an unemployed 24-year-old college graduate, told Al-Monitor, “I joined the AKP youth wing five years ago. I was an idealist back then. Now I am here because I need the network to find a job; everything is based on cronyism. I do not see much hope for a good position. Look, even Boynukalin cared more about being a parliamentarian because it is a cushy position. I will vote for the Felicity Party [which is more Islamist than AKP] because I am disillusioned by the AKP.” Ahmet’s views were confirmed by the hookah-smoking Islamist youth Al-Monitor interviewed over the summer. The youth, who mostly hang out at a coffee shop in the Tophane region but reside around the Fatih neighborhoods of Istanbul, had all voted for the AKP. But for this election, they said they would either vote for the ultranationalist Nationalist Action Party or the Felicity Party.

When asked about the impact of Davutoglu’s promise of a blessed wife, the young Islamist men chuckled. One said, “How about a job first? We can find our own wives if we have proper jobs and proper ways to communicate with prospective candidates.” Another added, “What is the promise of free Internet when you cannot tweet what you want? We are Islamists, not conformists. All these promises for the youth in the election declaration are either hand-me-downs or too vague to be true. We are not fooled anymore.”

The coffee shop owner, overhearing our Skype conversation, came by to give us a piece of his mind. “You guys are ungrateful. Erdogan is the only true politician in this country,” he said firmly.

Ironically, Erdogan is not running in the Nov. 1 election, and his own party has asked him not to lead any rallies. While Davutoglu has to resort to wild promises to keep the spotlight on him, young Islamist men are still depressed in Istanbul.