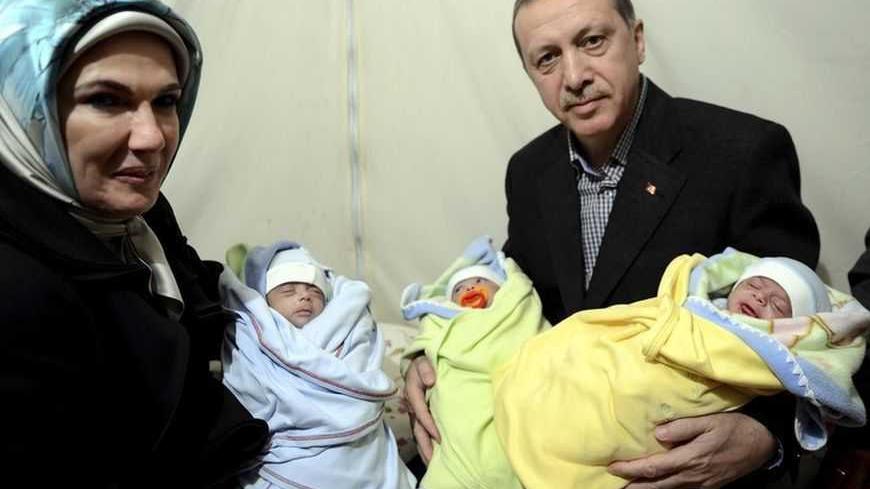 ANKARA — For more than a decade, Prime Minister Recep Tayyip Erdogan has enjoyed unwavering support for his vision of a grand Turkey, winning three elections in a row and two key referendums. But one cause he has fervently championed is falling on deaf ears: Turks are refusing to make more babies.

Himself a father of four, Erdogan has urged married couples to have at least three children, pushing his message bluntly on every platform — from casual chats and wedding ceremonies to party meetings and diplomatic occasions. Arguing that a larger, youthful population will help propel Turkey into the world’s top 10 economies, he has vilified past policies of “family planning” and made bizarre warnings of plots “to wipe the Turkish nation off the global stage.” Recently, he has upped the bar even higher, calling for four or five children.

But Erdogan’s hopes for a baby boom took a heavy blow on Jan. 28 when the statistics institute announced that Turkey’s birth rate had fallen to an all-time low of 0.12% in 2012. The figure means that the average number of births per woman is now two, down from 4.33 in 1978. The population still increased to 75.6 million last year, but its median age crept over 30 for the first time.

The premier must have been truly alarmed. Only two days later, Deputy Prime Minister Ali Babacan said he had received instructions from Erdogan to create a task force to outline measures to reverse the trend, stressing that the issue was now a top government priority.

On the pace of the current birth rate, Turkey’s population will continue to increase by 2035, stabilize at about 85 million and then start to decline, according to Babacan. “We have to introduce smart measures without upsetting the budget balance,” he said on the Kanal 24 news channel on Jan. 30.

Echoing Erdogan’s vision, Babacan added: “Population means power. … Look at the EU. Twenty-seven countries sit there at the table, but when Germany and France decide on something, those with populations of 1.5 million to 2 million like Estonia and Latvia are hardly having any say.”

Few would dispute the government’s arguments on the advantages of a youthful population and the setbacks that ageing populations pose today to the economies and welfare systems of more developed countries.

Skeptics however believe that a larger population will only come as an extra burden for a country which is still grappling with deep-rooted shortcomings in the education system, chronic income disparities and a huge development gap between its industrialized west and impoverished east.

Even though Turkey is today the world’s 17th-largest economy, about 18 percent of its population lives below the national poverty line. Youth unemployment is 18.1%, double the overall jobless rate. In the U.N. Human Development Index, Turkey is ranked 92th, lagging behind poorer regional countries such as Armenia, Georgia and Albania. The average schooling is 6.5 years, less than in Saudi Arabia, Iran and Qatar.

The government has offered no clear strategy on how those challenges will be tackled if the population swells on a faster pace. Shrugging off the criticism, Erdogan has argued that “every child comes with god-given livelihood.” Sometimes, he has chided women: “My wife raised four children, washing their nappies by hand. Today mothers just take off the diaper, throw it away and unpack a new one. But they still insist on only one or two kids.”

Liberal Turks worry that the Islamist-rooted government is motivated not only by demographic concerns but also a conservative agenda that targets liberal lifestyles and female emancipation. In his latest remarks, for instance, Babacan mentioned the rising marriage age and “the increase in relationships outside wedlock” as “significant obstructions” to population growth.

The fears have been stoked also by Erdogan’s outburst last year against abortion, which he described as “murder” and a tool of secret plots to curb the population and weaken Turkey. The health minister went as far as to suggest that even victims of rape should deliver the unwanted babies and then give them to state care. Women activists mounted a vocal campaign under the motto “My body, my decision” and took to the streets. The uproar forced the government to step back from its initial intention to either ban or strictly restrict abortion.

A few weeks ago, however, the press reported that the government is now drafting a bill that would keep abortion legal in the first 10 weeks of pregnancy but introduce a series of other measures to discourage the procedure or make it less accessible. According to the reports, abortions would be performed only in general hospitals after women are “briefed” against the procedure, made listen to the heartbeat of the fetus and sent back to reconsider their decision for several days. Among other measures, the bill would reportedly allow gynecologists to refuse to perform abortions on conscientious grounds, a provision that could have serious implications in small and remote settlements with a handful of doctors.

The Turkish Medical Union has raised concern that many state hospitals are already imposing de-facto restrictions by refusing to perform abortions after the first eight weeks of pregnancy on grounds they lack the necessary anesthesia equipment.

The alarm over the slowing birth rate demonstrated a growing recognition on part of the government that families would not be cajoled into having more children by just lecturing and restrictions. The government insists it is committed to the seemingly paradoxical objective of encouraging female participation in the labor force.

Ministers have now announced that the government will consider incentives such as financial benefits and tax deductions, and the extension of the maternity leave from four to six months. Officials are reportedly studying a proposal for a monthly allowance of 300 Turkish lira ($171) for mothers. But given the fact that the country’s richest regions have led the steady decline in the fertility rate over the decades, more disappointment may be in store for Erdogan.