The White, Black and Gray Of the Ergenekon Trial

That fervent belief in secrecy is behind the excesses of the Ergenekon case in Turkey. 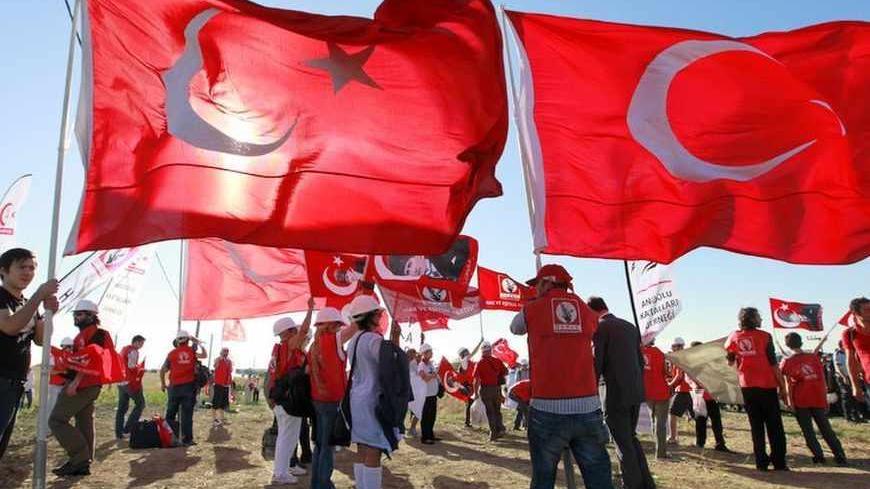 Protesters hold Turkish flags as they gather near a courthouse in Silivri, where sentences were handed down on people charged with attempting to overthrow Prime Minister Recep Tayyip Erdogan's Islamist-rooted government, Aug. 5, 2013. - REUTERS/Osman Orsal

Since its genesis in 2007, the Ergenekon trial has been quite hard to grasp by Turks themselves, let alone foreigners — for the case, which ended last Monday with heavy prison sentences for 254 suspects, is probably the most complicated in Turkish legal history. The indictment is longer than 5,000 pages, whereas the attached documents of evidence number more than a million. And the suspects — most of them now convicts — include a staggering scope of people ranging from retired generals to journalists, from university professors to mafia celebrities.

In Turkey, there are broadly three different views about this case:

The white view: Held by most religious conservatives, most of whom support the incumbent AKP (Justice and Development Party) and a few secular liberals. Accordingly, the Ergenekon case is a great leap forward for Turkish democracy. The suspects were members of a conspiratorial network, which would have launched a military coup against the AKP government had they not been brought to justice. They are also the members of the Turkish “deep state,” which has committed many crimes against leftists, Kurdish activists, liberals and non-Muslim minorities.

The black view: Held by most secularists and ultra-nationalists, most of whom are the sworn enemies of the AKP government. They believe that all Ergenekon suspects are in fact patriots whose only crime was to walk “on the path of Atatürk” and defend the republic against its “enemies within,” such as the AKP. They do not accept that there was a coup plot, but also believe that even if there were one, it would be only justified.

The gray view: Held by most liberals, a few religious conservatives, and even some mild secularists. They admit that the Ergenekon case was justified in its initial stages, and most of the initial suspects deserved to be tried in custody, as proven by a decision by the European Court of Human Rights on the case of journalist-turned-activist Tuncay Özkan (who just got prison for life). But those who hold this view add that the case got inflated too much with too little evidence. The guilty and the innocent were put in the same basket, as prosecutors arrested more and more people with quite circumstantial and controversial evidence.

I share this gray view, since I defended the case in its initial years (2007-09) but then repeatedly raised criticisms against its inflation with growing numbers and strata of suspects.

However, for those who defend the gray view, there is a good question to answer: What went wrong? Why did the Ergenekon case turn from a hailed effort against junta formations and the “deep state” to a hunt on prominent secular ultranationalists? Here, again, you can find three theories:

The AKP theory: The most typical explanation, especially in the Western media, is to argue that the AKP government used the Ergenekon case as a witch hunt against its political opponents. Erdogan, in this view, simply told Ergenekon prosecutors and judges (who are assumed to be under his command) to arrest and punish whomever he dislikes. However, there are reasons to doubt this theory. First of all, while the separation of powers in Turkey is nowhere near Western standards, it still exists. In other words, Erdogan simply cannot give orders to the judiciary. Moreover, while Erdogan and his party have indeed strongly supported the Ergenekon case in its initial years, they also raised concerns about the inflation of the case. The most notable example was the 2012 arrest of retired Gen. İlker Basbug, Erdogan’s chief of staff from 2008 to '10, for being a member of a terrorist organization, which is none other than Ergenekon. Erdogan then appeared on TV and said: “I have never found the charges directed against İlker [Basbug] correct. I think claims that he is a member of a terrorist organization are very ugly.”

But, alas, this did not save Basbug from getting a life sentence on Monday. Hence, I think, while the AKP’s political support for the Ergenekon case might explain some part of the excesses of the case, it cannot explain it all.

The problem with this theory is that it is simply impossible to verify or falsify it. No policeman, prosecutor or judge claims membership in the movement, which is actually focused on civil missions, such as education, charity and interfaith dialogue. Moreover, even if a particular state official is a member of the movement, it is impossible to figure out whether his decisions come from his communal ties or other factors.

The 'Turkish mind' theory: This third view, held by a handful of people including me, holds that the problem with the Ergenekon case is not any secret power behind it, but the draconian traditions of the Turkish judiciary and, especially, the conspiratorial mindset of Turkish prosecutors, which is a very dominant problem in Turkish politics as well.

The only Western journalist who read the whole Ergenekon indictment and wrote an analytical report about it, Gareth Jenkins (with whom I disagree in some aspects) had figured out this particular problem well when he pointed to the “the conspiratorial worldview on which the underlying premise of the case is based.” Jenkins believed that most suspects were connected by ideology (an “ultranationalist” and even “racist” ideology) but not by a secret hierarchical organization called Ergenekon — which is actually the name of a magical valley in Turkish nationalist mythmaking. He observed:

“Indeed, one of the most remarkable features of the Ergenekon investigation is the tenacity with which the investigating officers have clung to this belief [in an illegal organization] despite the absence of any proof of the existence of such a vast organization in the ever increasing volume of evidence they have collected. Instead of seeding doubts about its existence, the absence of any proof that Ergenekon exists appears merely to have reinforced their fear of its awesome power and capacity for secrecy.”

That fervent belief in “secrecy,” in my view, is the most important secret behind the excesses of the Ergenekon case — which I hope might be corrected at the Turkish Court of Appeals or the European Court of Human Rights. In general, it certainly would be wrong to condemn the whole case, and disregard that it helped put the nail on the coffin of Turkey’s dark era of military coups. But it also arguably put some innocent people in jail, and obviously helped further polarize Turkish society.