Following the verdicts of Turkey's Ergenekon case, are Turks having the right kinds of discussions? 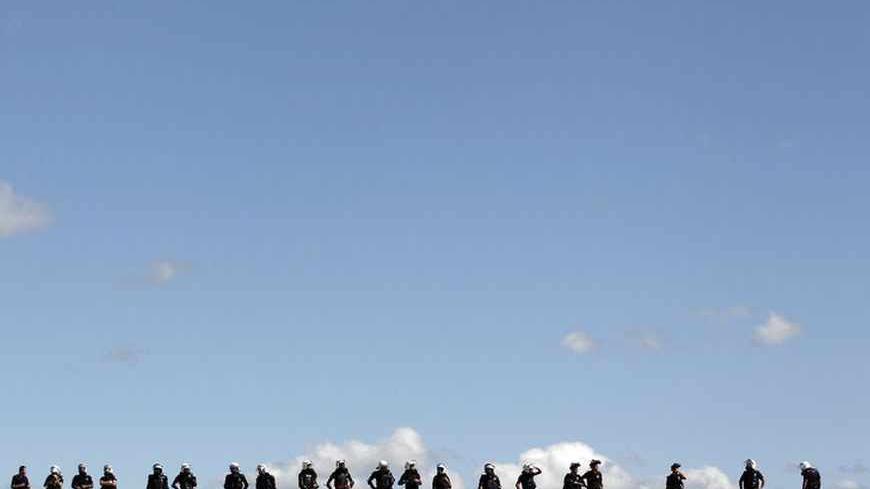 Turkish riot police take security measures around a courthouse in Silivri, where a hearing on people charged with attempting to overthrow Prime Minister Recep Tayyip Erdogan's Islamist-rooted government was due to take place Aug. 5, 2013.

The Aug. 5 verdicts in the Ergenekon case proved once again that Turkish society still has a long way to go before it develops a culture of democracy and rule of law.

According to the prosecution, the Ergenekon network was the very essence of Turkey’s “deep state” — carrying out assassinations and false flag operations in order to overthrow democratically elected governments. Prosecutors contended that Ergenekon operatives even plotted a coup against Prime Minister Recep Tayyip Erdogan from 2004 through 2007. Dozens of nationalist officers, policemen, academics and journalists were sentenced to lengthy prison terms.

The case was a great opportunity for Turkey to put an end to its problematic tradition of military supremacy in politics, but allegations of trumped-up evidence, lengthy detentions, lack of societal consensus over the verdict and, most important, the possibility that Ergenekon may not even be finished raise a very dangerous specter for Turkey.

Much has been written about potentially tampered evidence, late-night arrests and denial of defense to the accused in the case. One could argue that this is just how the court system in Turkey operates — notoriously unjust and inefficient. How people misinterpret Ergenekon is what’s troublesome.

Those who are upset about the verdicts point out that the accused have rendered “immense services” to their country. They question how so many high-ranking military officers, including former Chief of General Staff Ilker Basbug, could be labeled “terrorists.” Equating Turkish military heroes to Abdullah Ocalan, the jailed leader of the militant Kurdistan Workers Party (PKK), deeply offends some Turks. This feeling is quite understandable. Imagine General David Petraeus being put on the same dock as Osama bin Laden. Yet, the fact that so many Turks still believe that serving one’s country can put some above the law is worrisome. Legal cases should stand on their own merits, not on the politics or professions of the defendants.

Not that those who celebrate the verdicts are faring any better. Although these folks correctly argue that Ergenekon had interfered with democratic processes for years, their belief in the righteousness of the case prevents them from appreciating the injustices committed against the defendants. It is just as worrisome to see that there are those in Turkey who believe that disliking someone’s political stance is enough to convict them on potentially compromised evidence.

In short, as Al-Monitor’s Orhan Kemal Cengiz wrote in Radikal on Aug. 5, it is tragic that Ergenekon has failed to elevate people’s thinking on the rule of law and the role of the military in a democracy.

There is something, however, even more bothersome about the verdicts: Ergenekon may not even be dead. Among those convicted were Kemal Kerincsiz and Veli Kucuk, who were allegedly involved in the murder of Hrant Dink, the Turkish Armenian intellectual. Dink, whom ultra-nationalists intensely disliked because of his stance on the Ottoman government’s deportation of Armenians in 1915 — many historians agree that the episode constituted a genocide — was gunned down in Istanbul in January 2007.

Although the likes of Kerincsiz and Kucuk were convicted, nobody investigated the alleged roles of Istanbul’s former governor, police chief and head of police intelligence, who have since moved on to bigger and better things. If the AKP government sacrificed certain elements of Ergenekon and endorsed others, it is perfectly possible that we have not heard the last of the “deep state” in Turkey.

Instead of arguing over the verdicts, Turks of all walks of life should question if they are even having the right conversation about Ergenekon.

Barın Kayaoglu, a visiting fellow in international security studies at Yale University, is finishing his doctorate in history at the University of Virginia. On Twitter: @barinkayaoglu and Facebook: BarınKayaoglu.com