Revisiting the 1998 confrontation with Syria over Kurdish leader Abdullah Ocalan could help decision makers in Ankara avoid the pitfalls of intervention. 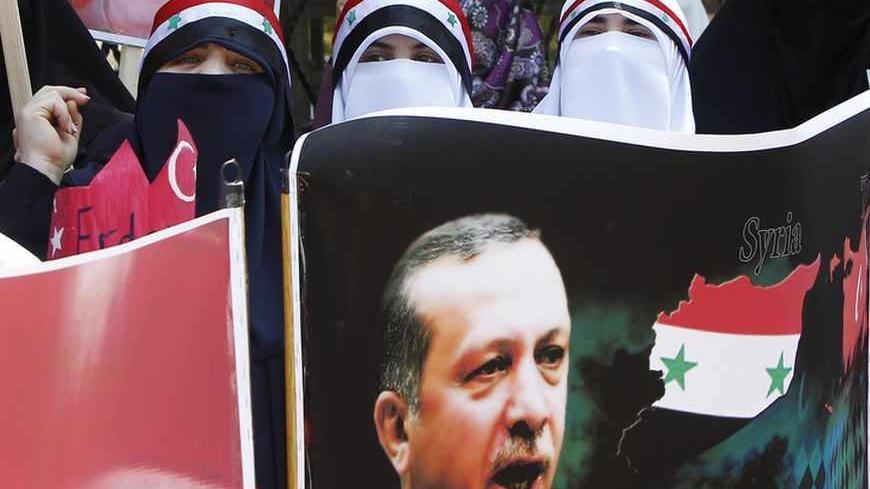 Syrian opposition demonstrators living in Jordan hold a poster of Turkish Prime Minister Recep Tayyip Erdogan during a rally in front of the Turkish Embassy in Amman, June 26, 2011, in support of Turkey's tough stance against President Bashar al-Assad. - REUTERS/Ali Jarekji

It tends to be forgotten, but in the fall of 1998 Turkey and Syria almost went to war. The crisis started when Gen. Atilla Ates, commander of the Turkish land forces, spoke near the Syrian border on Sept. 16. Ates, called on Damascus to expel Abdullah Ocalan and the Kurdistan Workers' Party (PKK), the militant group that had been fighting the Turkish government since 1984. The drums of war echoed throughout the Middle East as Turkish tanks seemed poised to roll into Syria. Unwilling to go to war, the government of Hafez al-Assad, father of the current Syrian president, complied with Ankara’s demand and expelled Ocalan. Turkey would capture its public enemy number one in February 1999, five months after Ates’ speech.

Today, Ankara’s enthusiasm for possible US airstrikes against the regime of President Bashar al-Assad makes one realize how Turkey’s Syrian odyssey has come full circle since that fateful fall of 1998. Even as US military action against Syria is becoming more likely, Prime Minister Recep Tayyip Erdogan and Foreign Minister Ahmet Davutoglu are disappointed that their Western and Middle Eastern allies are unwilling to use all means necessary to quickly topple the Assad regime. Five lessons from the 1998 episode and its aftermath could help Ankara devise policies more in tune with its national interests in Syria.

The first lesson is to connect available means to achievable goals. Although Ankara did not have all the resources to single-handedly overwhelm the Syrian military in 1998, it managed to convince Damascus otherwise by conveying an image to Assad that it, indeed, had the necessary tools. When one compares that with the Erdogan government’s response to Syrian attacks against Turkish jetfighters and border towns since last year, it becomes clear that Ankara may have already lost the military initiative. Today, with Turkey trying to goad its Western allies into attacking the Assad government rather than flexing its own muscles, the Syrian regime cannot take its northern neighbor seriously.

The second lesson is that one should always allow one’s enemy a graceful exit. In 1998, Turkey asked Syria to choose between two unpalatable options: give up its PKK trump card or face military action. Choosing the lesser of two evils, the elder Assad gave up Ocalan and his followers. Even as it pressured Assad, however, Turkey gave the Syrian leader an opportunity to normalize relations, which took place soon after the crisis died down.

In October 1998, Turkey and Syria signed the so-called Adana Accord, in which they pledged not to harbor militant groups targeting the other side. Four years later, Huseyin Kivrikoglu and Hasan Turkmani, the chiefs of general staff of the Turkish and Syrian armed forces, respectively, signed a military cooperation agreement in Ankara. Later in 2002, after Erdogan’s Justice and Development Party (AKP) came to power, it adopted the slogan “zero problems with neighbors.” The AKP’s energetic outreach toward the Middle East improved political and commercial relations between Turkey and Syria to such an extent that the two countries increased their trade several-fold and began discussions on creating a regional free trade zone.

The take-home here is simple: No matter how much you dislike your adversary or how horrible he is, diplomacy is almost always better than war.

One should remember that the elder Assad had less blood on his hands compared with his son, even when one counts the 20,000 people killed in the Hama uprisings in 1982 and the tens of thousands killed in the fighting between the Turkish government and the Syrian-backed PKK from 1984 to 1998. If Turkish leaders could bargain with the enemy for a higher cause in 1998, there is no reason why they cannot do the same today.

The third lesson is the need to maintain close cooperation with allies without confusing one's own objectives with theirs. During the 1998 crisis, Turkey worked closely with the United States and Israel, but once it got what it wanted, it embarked on an independent course vis-à-vis Syria. Indeed, the AKP government deserves much of the credit for pursuing that independent course from 2002 until 2011.

Today, however, that same AKP government does not seem to have a clear definition of its goals in Syria. Sure, it wants to get rid of Assad, but then what? Is Ankara really pursuing its own objectives in Syria or is it doing Riyadh, Doha and Washington’s bidding? The current discussions in the United States, where both the Barack Obama administration and members of Congress are bundling Syria's alleged use of chemical weapons with Iran’s nuclear program, should give Turkey a moment of pause. Military action against Syria could lead to an eventual confrontation between Iran and the United States, which would be catastrophic for Turkey. Ankara would be well advised to have clearly defined objectives in Syria and choose its friends accordingly.

The fourth lesson is to remember the Kurds. Turkey took a long time to address the grievances of its Kurdish citizens after the 1998 crisis died down and Ocalan's capture. In fact, the first major set of reforms on Kurdish cultural rights did not become law until summer 2002. Because Turkey has still not resolved its Kurdish question, it cannot engage with the Kurdish regions of northern Syria (Rojava) in a meaningful manner. Although Al-Monitor’s Tulin Daloglu optimistically reported that the peace process with the PKK has not yet stalled, Ankara still does not have a clear road map for what it wants to do with its own Kurds or with Syria's Kurds. A Turkey that has not resolved its Kurdish problem cannot enjoy peace at home and peace in the world.

This leads to the final and perhaps most important lesson from 1998 — securing public support. In 1998, for better or worse, Turkish public opinion had welcomed the prospects of war with Syria. More important, the threat of military action against Syria that culminated in Ocalan's capture yielded immense benefits for Prime Minister Bulent Ecevit, who secured an impressive electoral victory in April 1999, his first since 1977.

The situation today is very different for Erdogan and the AKP: The people of Turkey are vehemently opposed to their country’s involvement in the Syrian civil war. They could quickly turn against the AKP government should they become victims of “collateral damage” from an expansion of the war. Keeping an eye on the five lessons from the 1998 standoff with Syria and its aftermath could help decision makers in Ankara avoid losing public support and putting Turkey in harm’s way.

Barın Kayaoglu, a visiting fellow in international security studies at Yale University, is finishing his doctorate in history at the University of Virginia. Follow him at www.barinkayaoglu.com. On Twitter: @barinkayaoglu and Facebook: BarınKayaoglu.com