While anti-Semitism has been present in Turkey since the 1930s, Prime Minister Recep Tayyip Erdogan's latest anti-Israel remarks bring Turkey's long-standing xenophobia out in the open. 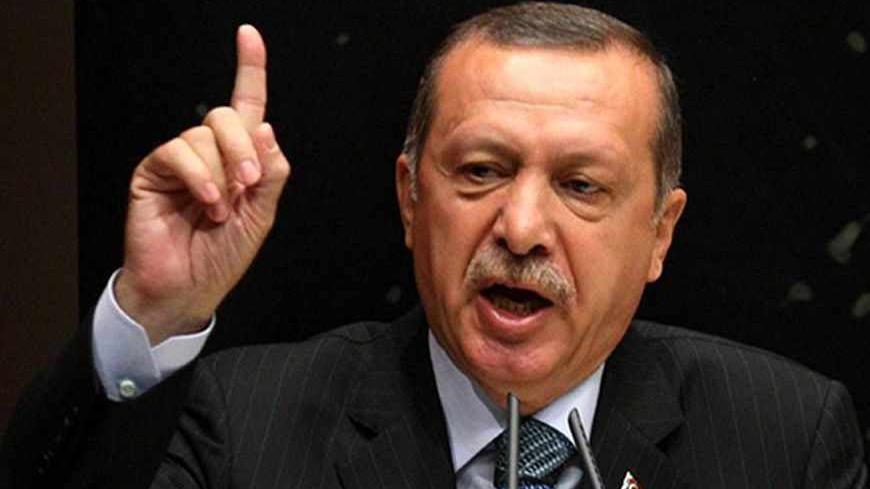 Turkey's Prime Minister Recep Tayyip Erdogan gestures as he gives a speech during a meeting at his ruling Justice and Development Party (AKP) party headquarters in Ankara, on Aug. 20, 2013. - AFP/Getty Images

A famous Turkic figure blasts Jews and Israel for their pernicious influence around the world. Americans respond in shock. Those who know the story are — somewhat nervously — giggling because they have seen it before. Our hero is not Sacha Baron Cohen’s Borat, but Turkish Prime Minister Recep Tayyip Erdogan, who just blamed Israel for orchestrating the July 3 coup in Egypt.

Erdogan’s evidence to prove his claim about the Israeli influence in the Egyptian coup is not a very strong one: it is a video of French author Bernard-Henri Levy attending a talk at Tel Aviv University (TAU) in June 2011 together with Tzipi Livni, who was an opposition deputy at the time and is currently the justice minister of Israel. When asked whether he would support a coup if the Muslim Brotherhood wins the elections in Egypt, Levy unapologetically responds in the affirmative. In the short video, Livni only nods her head but it is not clear whether she endorses the Frenchman’s views on a coup or his statement that “democracy is not only elections — it is values. You have to have the two.” (The 90-minute talk is available from TAU’s YouTube account.)

First of all, he undermines himself when he says he does not criticize Israel out of prejudice. Unfortunately, Erdogan’s use of Levy to accuse Israel for the coup in Egypt fits the standard definition of prejudice: forming a negative opinion about an entire group of people based on the actions of one of its members. At any rate, Levy — a Frenchman of Jewish background who is not an Israeli citizen — can hardly be taken as a spokesman for Israel. Accusing Israel for Levy’s words will taint Erdogan in the future even when he is justified in criticizing Tel Aviv’s actions.

Second, and building on the first point, Erdogan’s diatribes against Israel are becoming too predictable and reveal his profound inconsistencies. The Turkish prime minister rages against Israel and “the West” for supporting the military regime in Egypt; yet, he has hardly raised his voice against Qatar, Saudi Arabia and the United Arab Emirates, even though the petro-powers have embraced the coup in no uncertain terms. Riyadh even promised to bankroll Cairo if Western countries were to cut off aid. Erdogan seems to pick on Israel simply because it is an easy target.

Third, the Turkish prime minister is becoming for his country what Mahmoud Ahmadinejad was for Iran: a leader who makes a laughing stock out of a great nation with his anti-Semitic prejudice. Just as it was impossible to explain to foreign audiences that average Iranians did not share Ahmadinejad’s extreme views on Jews and Israel, it would not be possible to argue that average Turks do not share Erdogan’s prejudice. Foreign audiences quickly figured out that Borat was not Kazakh and did not represent Kazakhstan, but one cannot say the same thing about a prime minister who has won close to 50% of the votes in the last two elections.

Interestingly, Turks generally pride themselves on having provided sanctuary to Jewish people during the Inquisition, European pogroms and the Holocaust — a legacy that Erdogan likes to flaunt to domestic and foreign audiences.

Anti-Semitism, on the other hand, has always been present in modern Turkey. The Thrace pogroms (Trakya olaylari) in 1934, the Wealth Tax (Varlik Vergisi) during World War II and the riot on Sept. 6-7, 1955, had either specifically targeted Jews or Jews were lumped together with Turkey’s Greek and Armenian minorities. The first two episodes took place under the single-party regime of the Republican People’s Party (CHP), which is today the main secular opposition against Erdogan’s Justice and Development Party (AKP). The events of 1955 took place under the conservative Democrat Party (DP), to which Erdogan considers himself a political heir.

In short, Turkey’s subtle but long-standing xenophobic and anti-Semitic reflexes are coming out into the open. Even pro-secular and anti-AKP types are buying into it. Several years ago, one anti-AKP author even published a book in which he claimed that Erdogan and his wife were crypto-Jews. Aptly titled Children of Moses the book was on the bestseller’s list for a while.

That is the most unfortunate reality for Turkey at the moment: the only viable opposition to the country’s prejudiced, ultranationalist and religious leader are prejudiced and secular ultranationalists. Until a genuinely secular, democratic and liberal political movement captures the imagination of a majority of Turks, more xenophobic statements à la Borat will come out of Turkey.

Barın Kayaoglu, a visiting fellow in international security studies at Yale University, is finishing his doctorate in history at the University of Virginia. You can follow him at www.barinkayaoglu.com, On Twitter: @barinkayaoglu and Facebook: BarınKayaoglu.com