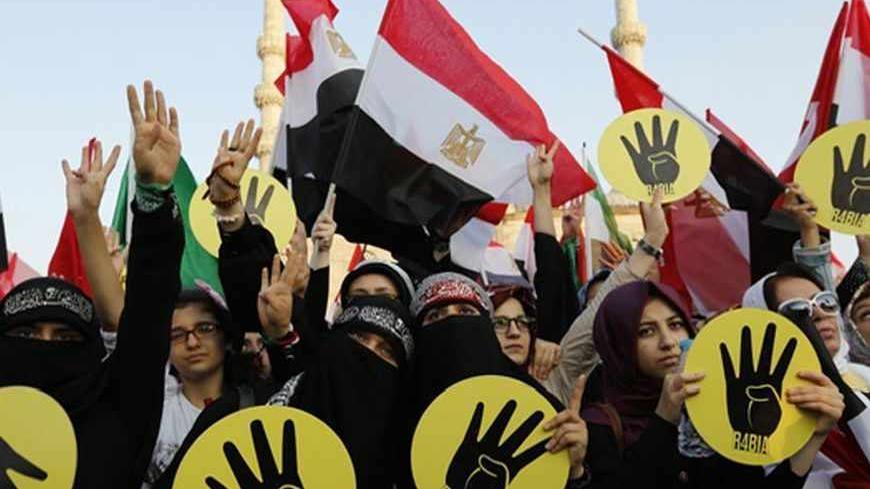 Supporters of deposed Egyptian President Mohammed Morsi and the Muslim Brotherhood wave Egyptian flags during a rally in protest against the recent violence in Egypt, outside the Eminonu New Mosque, in Istanbul, Aug. 17, 2013. - REUTERS/Murad Sezer

Since the beginning of the July 3 military coup in Egypt, probably no other country in the world has condemned it as passionately as Turkey has done. Millions of Turks, on the streets and online, have boldly opposed the deposing of President Mohammad Morsi and the violent oppression of the Muslim Brotherhood. The Turkish government spoke rigorously against not only the initiaters of the coup but also their international allies — from Washington to Tel Aviv to Riyadh. Ankara canceled a planned military exercise with the Egyptian military and pulled back its ambassador from Cairo.

As a Turk, I must say that I, too, share much of this reaction to Egypt's coup, which has not only derailed a very nascent democracy but has also killed hundreds of peaceful protesters. I believe it is an illegal, illegitimate, brutal and tyrannical era in Egyptian history that does great harm to this pivotal Arab country.

However, I also believe that Turkey's reaction to Egypt's coup deserves a closer look and a dissection of motives. For most Turks interpret the current events in Egypt from the lens of their own political experience and perspective, which can be outlined as follows.

Military interventions in democratic politics, which were once a standard fact of Turkey's political life, have recently become a national bete noire. Some of the former junta leaders are on trial, while many alleged would-be junta members are in prison. The dominant intellectual narrative emphasizes how military coups have harmed Turkey in horrible ways, and it has become a very marginal view to say that "coups restore democracy" — as some Egyptian "liberals" believe and US Secretary of State John Kerry seems to advocate.

That is why not just the governing Justice and Development Party (AKP) but also all other major political parties — including even the secular-nationalist ("Kemalist") Republican People's Party (CHP), which used to be an ally of the military — opposed the coup in Egypt. Military interventions are simply not welcome anymore in Turkey, whether they take place at home or abroad.

Yet, among major political parties, the AKP is clearly the most vocal against Egypt's coup, and this has a lot to do with a value that is strong among the party's members and supporters: solidarity with fellow Muslims around the world. This has always been a very powerful motive in Turkey's Islamist parties and conservative Muslim circles. The plight of Muslims — from Palestine to Bosnia and from Kashmir to Arakan — is always deeply cared about, prayed for and mobilized against. (Turkish "neo-Ottomanism" — it can thus be argued — is not simply a yearning for a lost empire, but a responsibility for the global "Muslim nation.")

The same value is very visible in the protests against Egypt's coup, as the carnage against the Muslim Brotherhood is defined as the "massacre of innocent Muslims," and the military regime is equated with the Quranic symbol of tyranny: the pharoah.

Besides those two genuine — say, "heartfelt" — motives, the AKP leadership seems to have a third one, which looks a bit more political and calculated: Using the military coup in Egypt to delegitimize the AKP's most vocal opponents at home, especially the Gezi Park movement. Most pro-AKP voices in the media argue that "they would do the same thing in Turkey" had Prime Minister Recep Tayyip Erdogan not "stood strong." This means that the Gezi Park protest was not a sudden burst of anger against Erdogan, but part of a pre-planned "coup scheme" just like the Tamarod (rebellion) movement in Egypt is seen to be: First, the masses go out on the streets to protest an elected Islamist goverment, then the army steps forward to overthrow it.

In fact, this popular theory has a big hole at its core: there is no single evidence of a collaboration between the Gezi Park protesters — hardly a militarist crowd — and the Turkish military, which is duly subdued by the AKP government. Yet still, it has convinced many conservative Turks, who also see the West's implicit support for Egypt's coup — real or perceived — and the West's explicit support for Gezi Park protests as two faces of the same conspiracy: a coordinared assault on the elected Islamists of the region. (Some add that the same plan is at work in Tunisia as well, with the recent protests against the coalition government led by the Islamist Ennahda party.)

Combined all together, these three factors mentioned above have culminated in creating the most anti-Western mood I have ever seen in AKP circles and among Turkey's conservative Muslims in general and even some secular democrats. The "hypocrisy" of the West, particularily the United States, is constantly condemned and the coup in Egypt is seen as the perfect proof of that "shameless" double standard.

Personally speaking, I must say that, while I find the domestic part of this narrative — that the Gezi Park protests were a Western-tailored coup attempt against the AKP government — delusional, the part about Egypt has a point. Yes, the West, especially the United States, is now betraying its own values. By not opposing a military coup against an elected goverment, by tossing arguments to justify it and by refusing to call it a "coup" to be able to keep on financing its perpetrators, Washington only seems to confirm the belief that "democracy is a lie" when it comes to Muslims.

That tragic consequence was probably most evident when Erdogan, in a press conference on Aug. 15, said, " If Western countries do not act sincerely on [the coup in Egypt] … I believe that democracy will start to be questioned across the world."

Of course, justified rejection of Western foreign policy should never justify rejection of liberal democracy, which happens to be prevalent in the West but is arguably a universal value. But it is not always that easy to make that distinction. And these days, sadly, those nuances are becoming blurred for even some Turks, who live in the oldest democracy in the entire Muslim world.