Whatever its current mistakes, the success of the AKP — arguably the superstar of global Islamism — lies in the fact that it is less ideological and more pragmatic than its forerunners. 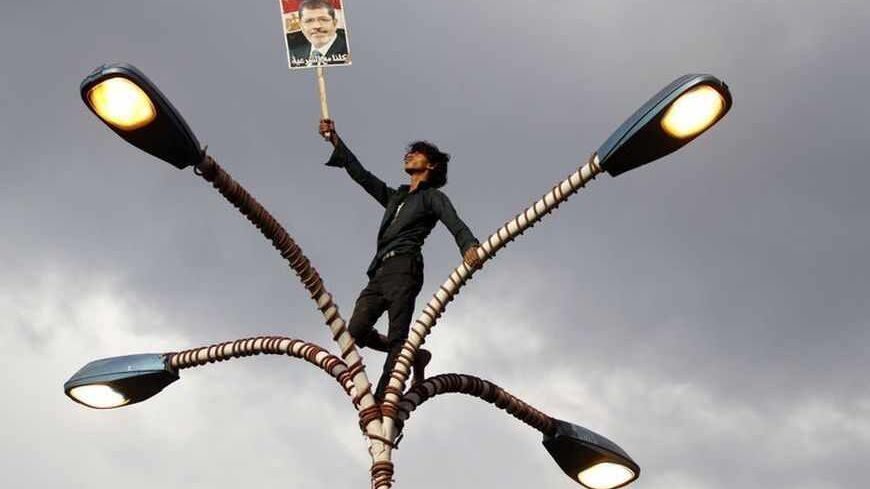 A supporter of deposed Egyptian President Mohammed Morsi holds up his photo while standing on top of a lamppost during a march to show solidarity with his supporters in Egypt, in Sanaa, Aug, 15, 2013. The poster reads: "We are all with legitimacy." - REUTERS/Mohamed al-Sayaghi

In my view, there is no doubt that the Muslim Brotherhood is the victim of bloody events in present-day Egypt. The country is suffering a brutal military coup — yes, a coup, not “popular impeachment,” let alone “restoration of democracy,” as some otherwise sensible figures mistakenly called it — and the deposed President Mohammed Morsi’s supporters are being violently oppressed and massacred.

Meanwhile, various governments, from the Arab Peninsula to the Western world, are failing miserably by not condemning the Egyptian military and its crimes. The Obama administration, for example, is “complicit in the new and horrifyingly bloody crackdown launched Wednesday by the de facto regime against tens of thousands of protesters,” as The Washington Post put it.

However, the fact the Brotherhood is the victim does not imply that it is impuissant. Quite the contrary. How the Islamist organization responds to injustice will be definitive for the future of Egypt and even beyond. I believe that are two crucial necessities:

Staying nonviolent: Since the first day of the military coup against Morsi, the Brotherhood has taken a peaceful stance, organizing nonviolent sit-ins in the Rabia al-Adawiya Square in Cairo and Nahda Square in Giza. Of course, the military regime condemned “the terrorists” of the Brotherhood, as all trigger-happy dictatorships in the region always do, before massacring them in hundreds. While the attacks on some government buildings and churches in the past week might apparently give some credibility to that “terrorism” narrative, it is unclear who really committed these attacks. Gehad El-Haddad, the Brotherhood media spokesman and senior adviser to its Freedom and Justice Party, said on Twitter: “We condemn all attacks on houses of [sic] worships & condemn police treachery in leaving thugs 2 [sic] vandalise while focusing on killing protesters.”

The propaganda war will probably continue, as the coup leaders and their supporters will condemn the “terrorism” or “the scorched-earth policy” of the Brotherhood, whereas the Brotherhood will respond with denials and counter claims. However, it is crucial for the Brotherhood leadership to constrain any real tendency toward violence in their midst since this only help justify the military's carnage and drag the country to a disastrous civil war. So, staying non-violent is an urgent necessity.

Future political engagement: This is a long-term matter. Eventually, this illegal and illegitimate military regime in Egypt will pass, and the country will, once again, go to the ballots. (The current regime might prove more brutal than Mubarak, as Shadi Hamid foresees, but it can’t hold forever in a post-2011 Egypt.) Then, the Brotherhood, perhaps with a new political party and new faces, will have a chance to compete with the so-called “liberal” forces that helped overthrow Morsi. This is a chance that they should not miss or dismiss, and for which they should prepare well.

For this long-term need, it might be helpful for the Brotherhood strategists to consider the “Turkish model,” or how Turkish Islamists responded to the last coup in Turkey and defeated it in the long run.

The last coup in question is what we Turks call “the postmodern coup” of 1997, which was launched against a government led by the Welfare Party, the closest thing Turkey has ever had to the Muslim Brotherhood’s Freedom and Justice Party. The party’s leader, the late Necmettin Erbakan, like Morsi, had stayed in power for only a year, before infuriating the country’s secularists and provoking its overbearing military. Like in Egypt right now, the “international community” was by and large complicit in the coup, because it had supposedly saved Turkish secularism from the Islamist threat.

Of course, there were big differences between Turkey 1997 and Egypt 2013. First of all, the coup was “postmodern,” in other words nonviolent and with no deaths. Moreover, the Islamists who were overthrown by the military did not organize mass protests and sit-ins as the Brotherhood has done. (It was not the age of Twitter yet.) And most of Turkey’s liberals, unlike most of Egypt’s “liberals,” opposed the coup and defended the legitimacy of the Welfare Party government, with whom they in fact largely disagreed.

Still, how the Islamists of Turkey survived the coup and ultimately defeated it is worth looking at. Their secret was not defiance, let alone radicalization, but moderation. The reformists within Erbakan’s party, such as Recep Tayyip Erdogan, Abdullah Gul and Bulent Arinc, realized that while nothing could justify the coup, some of the provocative and triumphant rhetoric among their own people helped provoke it. That is why they decided to launch a “renewal” movement in the party, which gradually evolved into the Justice and Development Party (AKP). Founded in 2001, the AKP made a clear break with the Islamism of Erbakan, using a pragmatic rhetoric which promised good governance and “respect for all lifestyles.”

While the latter message was not enough to calm down all the fears of Turkey’s paranoid secularists, it was enough to give respect to the AKP among the liberals and the Western world. No wonder the AKP survived the coup attempts of the 2000s, which found less support both in Turkey and abroad compared to the “post-modern coup” of 1997. The big difference was that the Islamists had reformed themselves, and redefined their loyalty to Islam as a commitment to universal norms such as justice, freedom and human rights, rather than an authoritarian ideology that seeks to impose “the Islamic way of life” on the whole society.

Today, there is some criticism in Turkey against the AKP that it is returning to its Islamist roots and reviving Erbakan’s authoritarian legacy. I think that the real problem is that the party's holding power for more than a decade has made its leadership overconfident and impatient. But whatever its current mistakes, the success of the AKP — arguably the superstar of global Islamism — lies in the fact that it had turned less ideological and more pragmatic than its forerunners. Their Egyptian comrades would be wise to take a hint.