Three Reasons Why Turkey Is So Polarized

The ruling Justice and Development Party can bridge the gaps by not responding to the provocations of the Kemalists. 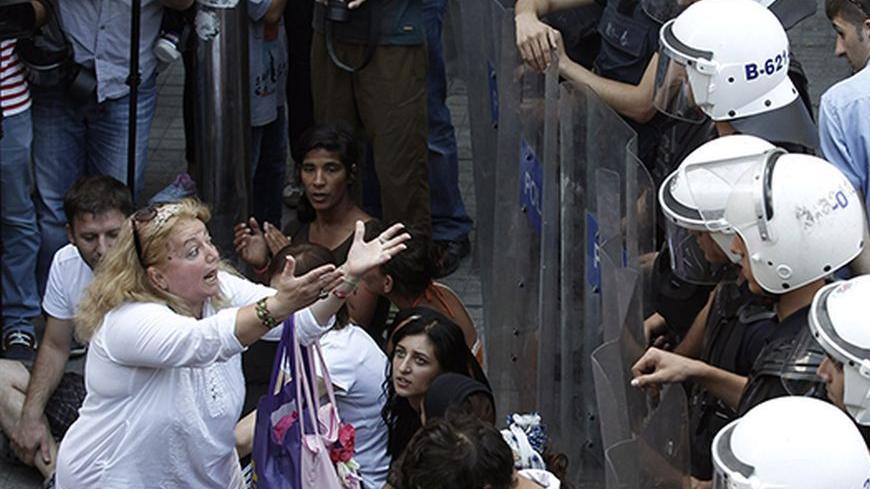 A demonstrator reacts to security forces during a peace day rally at Taksim square in central Istanbul, Sept. 1, 2013. - REUTERS/Osman Orsal

Last week, I had a chance to speak with a Lebanese intellectual who moved to Istanbul couple of months ago. After some small talk, she shared with me her most profound observation about Turkey: "This society is so polarized."

"You are right," I replied. "Thank God, we don't kill each other via civil wars, but yes, we Turks are very, very polarized."

This polarization has probably peaked since the Gezi Park protests last June, which unleashed loathing against Prime Minister Recep Tayyip Erdogan and those who support him. Erdogan and his governing Justice and Development Party (AKP), in other words, seem to be the main wedge that divides society. But similar tensions were present in the pre-AKP era, too. The '90s were an era of constant political tension, some political violence and a "soft" military coup. In the '80s, there was first a horrible, bloody coup in which torture was rampant, and then the much brighter democratic era of then-prime minister Turgut Özal, despite the fact that he, like Erdogan today, was despised by a certain part of society. In the '70s, things were much worse, as the Marxist and nationalist militants killed each other on the streets and even attacked "treacherous" fractions within their own ideological camps. In 1961, a military junta executed Adnan Menderes, the most popular Turkish politician ever, with the support of Menderes' political rivals.

For many of my fellow Turks, this constant tension is normal life and thus does not need any particular explanation. Others who seek an explanation find it in the imagined conspiracies of alleged secret forces — the "deep state," the CIA or the "interest-rate lobby." But a better answer might come from looking at society itself and its extreme polarity.

Social tensions are of course very complex, and sometimes have roots deep in history. In modern Turkey, however, I think that a big part of the blame lies in the Kemalist revolution (1925-1950). Named after its leader, Mustafa Kemal Ataturk, this was an authoritarian effort to transform Turkish society to look European, especially French. Ataturk, for example, launched a "hat reform," making the European-style brimmed hat compulsory for public servants and banning the Ottoman fez for all citizens. Dozens who opposed the "reform" were executed. This "cultural revolution" was more modest than a similar one by Chairman Mao Zedong in Communist China, but which resembled it in some ways nonetheless.

Ataturk, of course, was hoping for the ultimate success: that all Turks — his "children" — would accept his cultural revolution and be recreated in his image. However, as in all such efforts of social engineering, his success was only partial. A portion of Turks really adopted his vision and became the "Kemalists." But a larger portion of society resisted this state-imposed transformation. For example, many remained traditional, observant Muslims rather than the nominal Muslims the Kemalist project preferred. Or they remained Kurds, defying Ataturk's basic motto, "How happy is the one who says, 'I am a Turk.'"

This non-Kemalist part of Turkey has often been dubbed as "the other Turkey." Its members have felt oppressed, humiliated and exploited by the Kemalist elite. (They felt, as prominent Islamist poet Necip Fazıl put it in the 1940s, like "pariahs in their own country.") This division made Turkey really a "torn country," as Samuel Huntington once defined it.

However, "the other Turkey" has proved wise enough to resist its Westernizing masters with a concept that it borrowed from the West: democracy. Since "the other Turkey" had more voting power than the Kemalist elite, free and fair elections promised to empower the masses, and it really happened. Since 1950, the year of the "Turkish Spring," almost all general elections have been won by center-right parties, which represented the interests and aspirations of "the other Turkey" more than those of the Kemalists. It's no wonder all military coups in Turkey have been launched against these elected center-right governments by generals who proudly follow "Ataturk's principles and revolutions."

Today, Erdogan is triumphant because he completed the full circle — bringing "the other Turkey" to power — without being overthrown or executed by the military. It was no accident that his latest "democratization package" was mostly about the rights of conservative Muslims and Kurds, the two main components of this political faction. This is, indeed, an era of democratization in the historic sense.

However, all this does not heal Turkey's polarization but rather exacerbates it. The first reason for this is the never-changing wordview of the Kemalists. Instead of admitting the injustice inherent in their ideology, and offering a mea culpa, they still keep venerating Kemalism and see its demise as a heinous conspiracy by the Islamists, Kurds and their imagined "imperialist" patrons.

The second problem is that Erdogan and his hard-core supporters only make the Kemalist fears worse by their triumphant and revanchist rhetoric. As an academic friend of mine observed, "They want to enjoy their victory in full rather than reach out to the defeated and make peace with them."

The third problem is that not just the Kemalists, but also many of the secular liberals who used to support Erdogan, are getting worried that tables might be turned, that now the secularists may become "the other Turkey," as their way of life is often oppressed or marginalized. Erdogan often emphasizes that his party "respects all ways of life," and this is certainly a positive message. However, a new controversy pops up almost every week about some "encroaching conservatism" in public life — the latest about a female TV host who lost her job after her dress had been found "too revealing" by an AKP official.

All this means that Turkey is at a crossroads. If Erdogan and the "new elite" around him show a serious effort to win the trust of their secular opponents and curb the intoxication with power on their side, they can build a historic reconciliation with the old elite, as they are currently tying to do with the Kurdish separatists. But if they, like the Kemalists of the past, prefer to recreate Turkey in their own image, within an increasingly illiberal democracy, then Turkey's polarization will only deepen. And that will be a pity for a country that still has the potential to be an exemplary Muslim liberal democracy.

Mustafa Akyol is a columnist for Al-Monitor's Turkey Pulse and a columnist for Turkish Hurriyet Daily News and Star. His articles have also appeared in Foreign Affairs, Newsweek, The New York Times, The Washington Post, The Wall Street Journal and The Guardian. He is the author of Islam Without Extremes: A Muslim Case for Liberty. On Twitter: @AkyolinEnglish