Why Turks Are Fighting Over Trees

The controversy over thousands of trees to be uprooted on a university campus in Ankara for a construction project is reminiscent of Gezi Park. 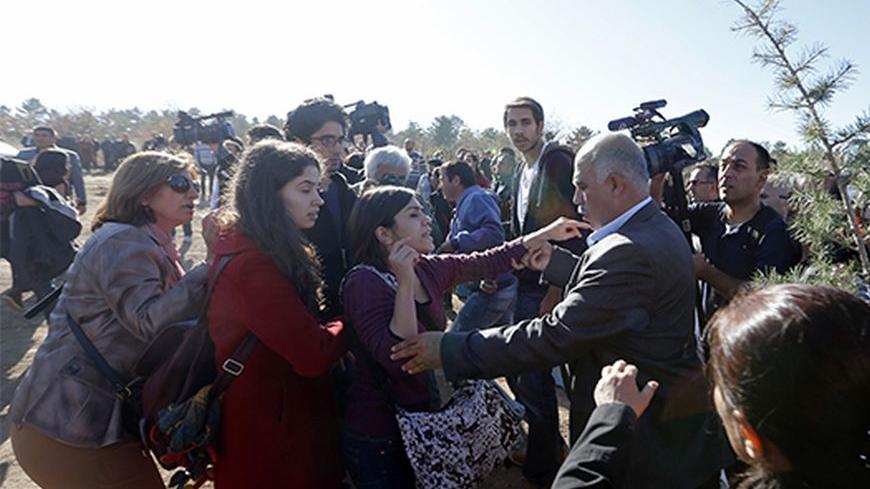 Protesters argue with municipality workers during a demonstration against reconstruction plans that include uprooting a large number of trees at the Middle East Technical University campus, Ankara, Oct. 21, 2013. - REUTERS/Umit Bektas

Yet another source of political tension is unfolding these days in Turkey over construction in a public space: The Ankara municipality, led by Justice and Development Party (AKP) Mayor Melih Gokcek, is building a new highway. It will pass through the large campus of the Middle Eastern Technical University (METU). The construction project will involve the uprooting of some three thousand trees, leading to objections by both the administration and students of METU.

This tension has loomed for a while, but intensified this week. On the night of Oct. 18, the last day of the Feast of the Sacrifice, the Ankara municipality apparently grew fed up with waiting for the final decision of the METU administration, with which it was negotiating, and sent bulldozers onto the campus to clear the path for the highway project. Hundreds of METU students, enraged by this "attack," tried to stop the bulldozers, only to be repelled by police with the now customary tear gas. Students' efforts to plant new trees in the area were also disallowed by the police.

Earlier this week, Gokcek gave a news conference in which he explained that his municipality was a "green" one, that some of the uprooted trees will be transplanted elsewhere and that the "expense" of the trees (some 211,000 lira, or $108,000) were transferred to METU accounts. The METU, however, announced that this money would be rejected. The school, apparently, simply wanted trees untouched and the highway unbuilt.

If you feel déjà vu of the spark that launched the Gezi Park protests last May, you are right. The stories are quite similar: AKP authorities want to build something new (a mall, residence or highway) in a public space. Youths, most of them environmentalists and/or leftists, oppose and protest. The authorities use the police to disperse the crowds, only escalating tension.

Now, if you are not Turkish, you might find all these confrontations quite insensible, and wonder why these people can't just be reasonable, sit down together and develop common-sense solutions to these mundane problems. But then you would be overlooking two important facts. First, consensus is really not a popular idea in this nation, as it is almost always sacrificed to stubbornness and confrontations. Second, the tension that we see in these incidents is in fact a clash between the two main idelological currents in Turkey.

The first of these currents is that of the center-right, which the AKP largely represents today. (The AKP, to be sure, is more explicitly pro-Islamic than previous center-right parties, but it still retains most of their main aspirations.) Represented by legendary leaders such as Adnan Menderes (1950-1960), Suleyman Demirel (1965-1980) and Turgut Ozal (1983-1993), the center-right has always had two main values: respect for tradition (including religion) and passion for building a technically modern Turkey, with more highways, dams, bridges, factories and, lately, shopping malls and sky scrapers. (To see how sacred this building mission is for the center-right, just see what Erdogan said Tuesday, Oct. 22, in the face of criticism on the highway that passes from METU: "Even if there is a mosque in front of a road, we would demolish that mosque."

On the other side of the political spectrum, there has been what is called the "Kemalist left." Represented largely by the Republican People's Party (CHP), this ideological line has opposed the center-right on the latter's two tenets. What the center-right called "respect for tradition" was, in the eyes of the left, "concession to reactionaries." (For example, banning the Islamic headscarf in public institutions used to be one of passions of the Kemalist left, against a center-right which, at various times, tried to repeal that ban.)

What the center-right called "development" was something even worse for the left: "plunder." In other words, the Kemalist left always believed that the right was building only to create profits for its fellow capitalists, an inherently dirty word in the parlance of the Turkish left.

This was why one of the most visible contributions of the Turkish center-right to Istanbul, the Bosporus Bridge, which connected the European and Asian sides of the city for the first time in history in 1973, was condemned by the Turkish left. Built by the center-right Justice Party of the time, the bridge was in fact one of the most hated objects of the left in that tumultuous decade. "No to the bridge" was a common slogan at socialist rallies, where huge posters of the Bolshevik leader Vladimir Lenin were matched only by those of Turkish leader Kemal Ataturk.

The youths who today march in Turkish streets with slogans such as "no to malls" or "no to highways" are the direct ideological descendants of those leftists of the '70s. In my personal view, they are, with all due respect, pretty fanatical and somewhat inane.

But fanaticism and inanity are facts of life, as well as components of democracy. Therefore, the left-wing opponents of "development" (one of the two pillars of the ruling AKP) should have the right to organize their demonstrations. At times, when they have really reasonable objections, they should even be listened to.

However, the governing AKP has no such patience, and that is its main problem. In other words, in both the Gezi Park and the METU crises, the AKP could have allowed peaceful protests and have sought some consensus with the Kemalist-leftist camp. Yet it opted for hastily executing its decisions and using police power to disperse the opposing crowds. If narrow mindedness is the major trouble on the other side, hubris is the one on this side.

This is the brief story of how Turks have been fighting each other repeatedly over an issue as simple as trees. It is a pity that they can't show the democratic maturity one might find in more harmonious nations. But it is a blessing that both the topics and the means of their controversies are much less lethal than those of some of their neighbors.

Mustafa Akyol is a columnist for Al-Monitor's Turkey Pulse and a columnist for the Turkish Hurriyet Daily News and Star. His articles have also appeared in Foreign Affairs, Newsweek, The New York Times, The Washington Post, The Wall Street Journal and The Guardian. He is the author of Islam Without Extremes: A Muslim Case for Liberty. On Twitter: @AkyolinEnglish