AKP pushes its own brand of Turkish neonationalism

Turkish neonationalism, traditionally a product of authoritarian state power, is being pushed by proponents of the Justice and Development Party (AKP) and nurtured by Prime Minister Recep Tayyip Erdogan. 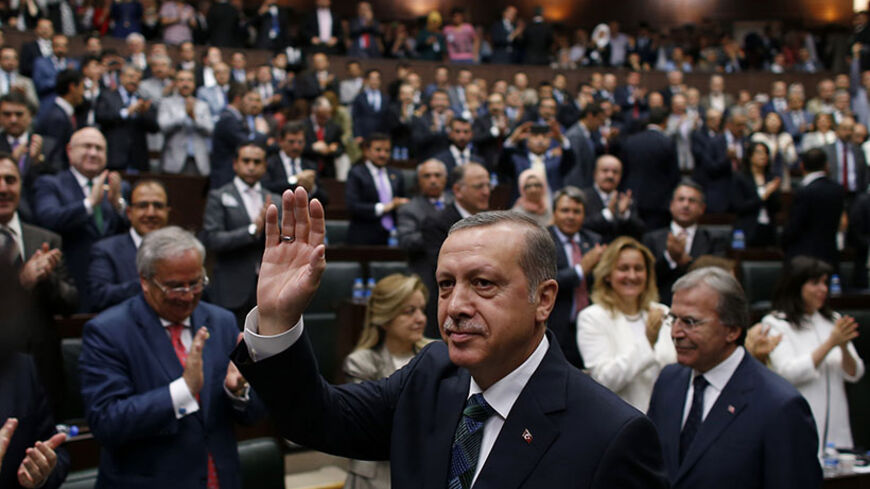 About a decade ago, the ideology of neonationalism emerged in Turkey, espousing more or less the following view: Imperialism has mounted a fresh offensive to enslave the peoples of the Middle East. The biggest stumbling block on its march is the fully independent Republic of Turkey, the legacy of the Great Leader Ataturk and a glimmer of hope for the oppressed peoples of the world. The “moderate Islam project” is the most efficient tool being used by imperialism to destroy the Turkish republic from within.

The so-called moderate Islam project vilified in this narrative was none other than the Justice and Development Party (AKP). The neonationalists saw the AKP not as a “Turkish” reality speaking for the country’s conservative masses and responding to popular demands, but as a project designed in Washington. Accordingly, the project's sly objective was to subdue the good old fully independent republic to the “global system.” Who else would have been as treacherous as those religious reactionaries to sell out Cyprus!

The theme of a Jewish conspiracy also figured prominently in the neonationalist narrative. For instance, awards received by Prime Minister Recep Tayyip Erdogan from Jewish organizations were portrayed as proof that he was “in the service of Zionism.” The neonationalist writer Ergun Poyraz stretched his imagination so far as to directly declare AKP leaders “crypto-Jews.” For him, Erdogan was "Moses’ son,” President Abdullah Gul was “Moses’ rose” (a reference to Gul’s surname, which means “rose” in Turkish) and the AKP was “Moses’ light bulb” (a reference to the party's emblem).

So, that was the neonationalism of the past. It caused quite a stir in Turkey in the first decade of the 2000s before gradually fading. The old neonationalists are today a group with a feeble voice. In its place, a new breed of neonationalist rhetoric, just as fervent as the old, has been on the rise in the past two years. This time, however, it is the product not of the AKP’s opponents, but its supporters.

The narrative, repeated almost on a daily basis in the pro-government media, goes more or less like this: Imperialism has mounted a fresh offensive to enslave the peoples of the Middle East. The biggest stumbling block to imperialism's march is the genuinely national, independent Republic of Turkey built under the leadership of the Great Master Erdogan that is a glimmer of hope for the oppressed peoples of the world. Parallel-state members, Gezi protesters, barons (i.e., the secular bourgeoisie) and White Turks are the most efficient tools being used by imperialism to destroy this dear New Turkey from within.

Thus, the new neonationalist narrative is strikingly similar to the earlier version. Both have sought the same purpose of dividing the nation into two types of people: the traitors, who succumb to foreign plots, and the true patriots, who stand up against them. The latter are portrayed as followers of an infallible leader, be it the Great Leader Ataturk or the Great Master Erdogan.

Just like the old neonationalists, the advocates of the new narrative claim that Turkey is at a critical, historic juncture and must choose between contemptible slavery and glorious independence. One of them, for instance, associates Ekmeleddin Ihsanoglu — the opposition’s joint presidential candidate and former secretary-general of the Organization of Islamic Cooperation — with Egyptian strongman Abdel Fattah al-Sisi, writing that the choice before Turkey is between the “defanged, remote-controlled, engineered Islamic satellite states that Sisi and Ihsanoglu represent” or “genuine, independent national states, embodied solely by Turkey under Erdogan.”

As in the old neonationalist narrative, “moderate Islamists” figure prominently among the traitors bent on stopping the independence drive that thrives “solely under Erdogan’s leadership.” Yet, this time, the moderate Islamists are not the AKP, but the party’s most recent enemy, the Gulen community. In another similarity, the Jewish conspiracy has a prominent place in the new narrative as well. Hence, government opponents — the Gulenists, Gezi protesters and White Turks — are often “unveiled” to be in collusion with “international Zionism.”

No offense to its advocates, but there is no better definition for this rhetoric than “new neonationalism.” Certainly, this new neonationalism is short on the secularist, if not Islamophobic, elements of the previous version. In stark contrast, it contains Islamist themes, but its perception of “internal and external enemies” is identical. Why did this nationalist trend emerge? How did it come to pass just as the AKP had subdued the old neonationalists and embarked on a path of integrating Turkey into the European Union and the world? Didn’t Erdogan declare in 2008, “We are no longer a country surrounded on all sides by enemies”?

My explanation is this: neonationalism is an ideological symptom that befalls the holders of authoritarian state power. The Kemalists held such power before, hence a Kemalist neonationalism emerged. Today, this power is in AKP hands, hence a pro-AKP neonationalism has evolved.

But why does authoritarian state power produce neonationalism? Because the West, where Turkey has belonged in one or another form for some 150 years, denounces authoritarianism and dictates liberal democratic norms and values. (Let me be clear here: Some Western actors, primarily the United States, are often hypocritical in regard to these norms and values, which is part of the problem.)

The Kemalists were primarily irked by such liberal democratic norms and values as religious freedom, minority rights and civilian politics and the related criticisms the West directed at Turkey. The AKP, for its part, is irritated by such concepts as press freedom, the right to demonstrate and limited government.

To say that the new neonationalism has become the AKP's covert official line would be unfair. Rather, it is a trend reminiscent of the so-called tea party emerging from the ranks of the Republican Party in the United States. Some prominent AKP figures are clearly annoyed, including Deputy Prime Minister Ali Babacan, who has warned against “attempts to drag the country into an adventure for one’s own political future.”

It is alarming, however, that this tea party-like current is nurtured directly by Erdogan and identifies itself with him. Unless Erdogan makes a surprise U-turn, as he did in regard to the Kurdistan Workers Party (PKK), it bodes a gloomy future for Turkey — a future that, to use Babacan’s words, will “divert Turkey from the main, sound road” and turn it into an introverted, paranoid regressive country.