A recent video produced by the Justice and Development Party reveals an intense nationalistic vibe. 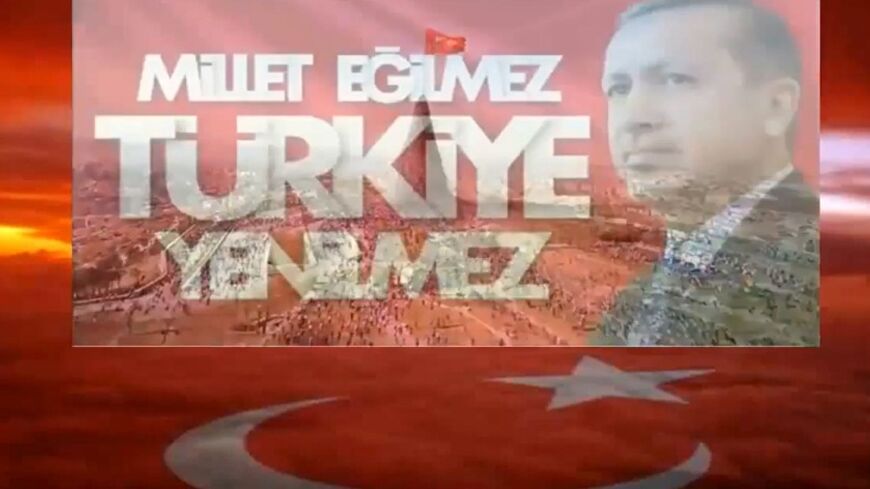 To understand the political psychology of Turkey’s ruling Justice and Development Party (AKP), don't miss its latest piece of propaganda — a three-minute, professionally made video with imagery worthy of a Hollywood blockbuster. The video succinctly summarizes the current grand narrative being promoted by Turkey's ruling party: The Turkish nation is under attack, and Prime Minister Recep Tayyip Erdogan is calling on compatriots to unite and resist.

The film begins dramatically: A Turkish flag flies beautifully, high above Istanbul from atop a colossal pole. A scary-looking man in a black suit and black gloves walks menacingly toward the pole, takes out a metal bar and breaks the mechanism for raising and lowering the flag. The flag begins to fall in slow motion as citizens watch in shock and horror. At that moment, Erdogan's voice is heard reciting a passage from the Turkish national anthem:

Shield with your body, let this shameless invasion stop.

Days which God has promised to give you will dawn;

Upon hearing these powerful lines, Turks from all walks of life drop whatever they are doing and run toward the giant flagpole from everywhere — parks, classrooms, offices, farms, mosques and villages. Many of them jump into the waters of the Bosporus to swim across. They all unite around the pole and begin climbing on top of one another, forming a human pyramid. (Some have jokingly suggested that the scene looks like the zombie tower in the Hollywood thriller World War Z.) At last, a young man reaches the top, grasps the dangling cord and jumps from the pyramid — likely sacrificing himself — to raise the falling flag.

No words are spoken other than Erdogan's excerpt from the national anthem, but for all the Turks who see it, the message is all too obvious: Erdogan's political opponents are not only attacking him, they are attacking the nation itself. Turkish patriots must unite against these most wicked of enemies.

Erdogan began using such nationalistic rhetoric during the Gezi Park protests in summer 2013. The protesters, in the conception of Erdogan and his inner circle, were not just angry masses who had issues with his government’s policies, but pawns of foreign powers seeking to halt Turkey’s progress. For example, according to one popular theory, offered by the journalist Yigit Bulut, the German airline Lufthansa is one such power, working behind the scenes to weaken its rival, Turkish Airlines. Soon after this revelation, Erdogan appointed Bulut as one of his advisers.

In December, when Erdogan got into a political war with the Gulen Movement, his former ally, conspiracy theories once again bloomed. For Erdogan and his team, their confrontation with the Gulenists — and the corruption probe and scandalous wiretaps launched after that — was not a domestic affair, but an “international operation” in which Fethullah Gulen and his followers were merely pawns. That Gulen has lived in the United States since 1999, and has a carefully moderated stance toward Israel, was interpreted by the pro-Erdogan media as sufficient evidence of his servitude to the US government and “Zionism.”

In February, the AKP's Istanbul branch published a booklet helpfully summarizing the party's arguments and theories. Titled “Everybody Should Know These Facts” and distributed for free, it states,

Whenever Turkey is freed from its chains and stands up, some domestic and foreign power centers get disturbed, push the buttons, and orchestrate the known tricks. The Gezi events and the so-called corruption investigation are the pieces of that same trick. The purpose is to stop Turkey and hinder its progress, to disrupt Turkey’s political and economic stability. And the most important target is to eliminate the builder of Turkey, Recep Tayyip Erdogan, and design a Turkey without him.

The inevitable response to this conspiratorial thinking is an uncompromising, defiant political stance. Since Erdogan's domestic opponents can't possibly be legitimate actors with understandable objectives, but instead are traitors who serve evil schemes, they cannot be talked to. Rather, they need to be demonized, silenced and crushed. Meanwhile, the true patriots must unite behind the savior of the country as he leads the great patriotic war.

Of note, this was the very political rhetoric used against Erdogan by his staunchest political enemies during his first decade in power (2002–2012). Known as the ulusalci in Turkish, these secular-nationalists who claim to follow in the footsteps of Mustafa Kemal Ataturk, the founder of modern Turkey, also believed that Turkey needed a “war of liberation” against its enemies within. For example, in December 2011, Dilek Akagun Yilmaz, a member of parliament from the main opposition People’s Republican Party (CHP), openly called for a “war of liberation against the AKP, the collaborator of imperialism.”

Erdogan, who has only opened a new chapter in the long campaign against the “collaborators of imperialism,” seems not to care much about the irony. He only has a problem with the Higher Election Board, the judicial body that this week banned the aforementioned propaganda film. The reason for the ban is a law decreeing that no political party can use the Turkish flag for propaganda purposes. When journalists asked Erdogan about the ban, he replied, “We will ban the ban,” hinting at yet another rushed and ad hoc legal design. Apparently, when the matter is the homeland, as the secular-nationalists used to say, all else becomes trivial.