Did the West write Erdogan off for Israel’s sake?

The Western media’s anti-Erdogan stance is fueled by Erdogan’s own partisan and ideological rhetoric. 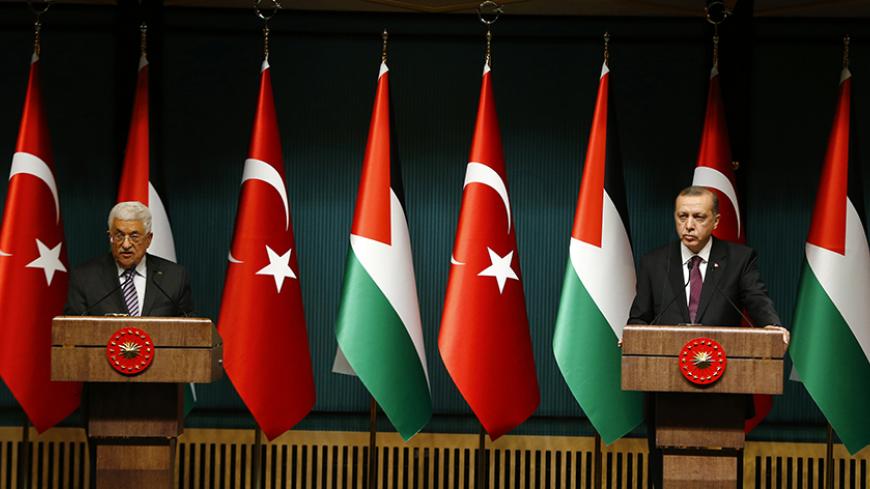 In remarks to journalists last week, Turkish Prime Minister Ahmet Davutoglu acknowledged that Turkey’s image in the Western media had turned negative, but argued this was all a plot. “There is an international media network in the world. We are doing our best, but this network has made a decision to finish off Turkey’s success story and demonize President [Recep Tayyip] Erdogan. That’s their objective. They have moved against Turkey as if a button was pressed after 2010, that is, after the 'one-minute' incident in Davos.”

In other words, Davutoglu basically suggested that pro-Israeli domains, infuriated with “New Turkey” for its brave defense of the downtrodden Palestinian people, were behind Western criticism of Erdogan.

Notably, this argument is not merely Davutoglu’s personal view, but virtually an official position adopted by the Justice and Development Party (AKP). Over the last two years, we have come to hear this propaganda from party spokesmen and AKP media almost on a daily basis. We are being told that the AKP has become the target of shadowy Western quarters because it is the protector of oppressed Muslims.

But is that true?

As someone who is acquainted with and closely follows Western media (and has many times defended the AKP there), my answer is: No, that’s not true.

Let me elaborate. Turkish-Israeli relations were naturally strained after the famous Davos incident in January 2009 (not 2010), when Erdogan, then prime minister, condemned Israeli President Shimon Peres for “killing children” in Gaza. The relations deteriorated further in 2010 over the Mavi Marmara incident and Turkey’s voting against sanctions on Iran at the UN Security Council. Yet, in March 2013, Israel, prompted by US President Barack Obama, offered Turkey an apology over the Mavi Marmara bloodshed. The move was a sign that Israel felt compelled to work with the Erdogan government, even though it was hardly fond of it.

And what was the Western media’s stance in the meantime? Were they taking aim at Turkey?

No, not at all. On the contrary, Turkey continued to enjoy a largely positive portrayal in the West in the wake of that stormy Davos panel throughout 2009, 2010, 2011 and 2012. It did face criticism for restricting press freedoms and jailing journalists, but Western capitals continued to view Turkey quite favorably until mid-2013.

In November 2011, for instance, Time featured Erdogan on its cover, with a largely laudatory article. In 2012, the Western press was awash with articles recommending the “Turkish model” to Islamist parties that the Arab Spring swept to power. In May 2013, Erdogan received the highest welcome in Washington and stayed in Blair House, Obama’s special guesthouse.

Similarly, the “Davos incident” had no impact on Turkey’s freedom rating by Freedom House, which the AKP media frequently portray as a “Zionist” organization. Turkey, which scored 4.5 on a 7-point scale (with lower numbers indicating better performance) in the pre-AKP era, saw its rating improve to 3 soon after the AKP came to power in 2002. The country fell back to 3.5 only in 2013 and 2014.

Such data and other indications point to an obvious fact: Erdogan’s “New Turkey” saw its image in the West deteriorate not after the 2009 “Davos incident” but after mid-2013. The turning point here was the Gezi Park protest movement, which rattled Turkey in the summer of 2013.

But why did Gezi Park protests have such an impact?

Well, the excesses of the Gezi movement notwithstanding, the Erdogan government’s heavy-handed response, complete with a strong anti-Western rhetoric, evoked a typical authoritarian regime. From the very first day, Ankara labeled the protesters as agents of Western intelligence, “the interest rate lobby” and other dark foreign powers, while blasting Western media as “agent provocateurs.” Those outbursts naturally baffled Western commentators and sparked harsh criticism.

This is not to argue that the Western media’s analysis of the protests was perfectly objective. Just as we Easterners do, Westerners show more sympathy to people who look more like them. As a result, the Gezi movement was romanticized, and its sometimes full-mouthed language and vandalism were ignored. Similarly, the Western media were little aware or perhaps chose not to see that many of those in the streets were not “liberals” but neonationalists.

Yet, the government’s authoritarian response and its conspiracy theories were inevitably disturbing to all liberal ears, let alone Western ones that were declared to be the “headquarters of the Gezi conspiracy.”

In the meantime, did the Israeli lobby have any role in the declining image of the AKP? Certainly, it did. Supporters of the Israeli right have been averse to Erdogan ever since 2009. But, unlike what the conspiracy-prone minds in Turkey believe, those quarters represent not the West’s “secret decision-making headquarters” but just one of the many quarters in the West. In contrast, the mainstream Western media gave credit to the “moderate Islamic” government in Turkey up until the Gezi Park protests, when they made a U-turn with a huge disappointment.

An article by Bloomberg writer March Champion in December 2013 is a good illustration of how the sentiment soured. Responding to an Erdogan adviser who accused Western critics of “Orientalism,” Champion wrote: “For many years, like most Western journalists reporting in Turkey, I defended Erdogan and his government against the 'paranoiac' (my word) suspicions of secular Turks who claimed that he had a radical Islamic or authoritarian agenda. … Until a few years ago, the government was praised abroad for [its] achievements, hence the rise of the term the ‘Turkish model.’ If you don't hear much praise now, it's because the liberal reforms stopped several years ago. In areas such as press freedom, they were put into reverse. And while we continue to laud, for example, Erdogan's peace efforts with Kurdish separatists, it would be impossible for us not to report on the disappointment that so many observers, above all inside Turkey, feel as they watch him throw away the chance of greatness. Instead, he is pushing a partisan, ideological agenda for reasons that have mostly to do with consolidating his base ahead of elections next year.”

In short, the Western media’s anti-Erdogan stance was fueled by Erdogan’s own “partisan, ideological agenda.” It is thus a bit contradictory to demonize “Western agents” and “modern-day Lawrences of Arabia” on a daily basis, and then complain of Western media bias. It is a vicious cycle, in which the rhetoric of hatred and conspiracy Ankara has employed since the Gezi protests holds the primary blame.

Absent this deeply anti-Western rhetoric, things would have been much better today both for the West and Turkey and the Muslim world in general. Turkey would have had more credibility and influence when defending rightful arguments on Palestinian rights, the coup in Egypt or injustices in the international system, and its criticisms could have served as a constructive contribution to the West. Today, however, those issues have become bombastic material for domestic consumption, amounting to nothing but “a Muslim’s propaganda to a Muslim.”

In sum, no shadowy powers have “pressed the button” against Erdogan’s government. And if any “button” might have driven Turkey and the West apart, it was pressed by the Turkish government before anyone else. The acknowledgement of this fact is a must for Ankara, if relations with the West — and Turkey itself — are to be normalized.