The AKP government’s portrayal of Gezi Park protests as a "plot by the Jewish lobby" has negatively affected the normalization process with Israel. 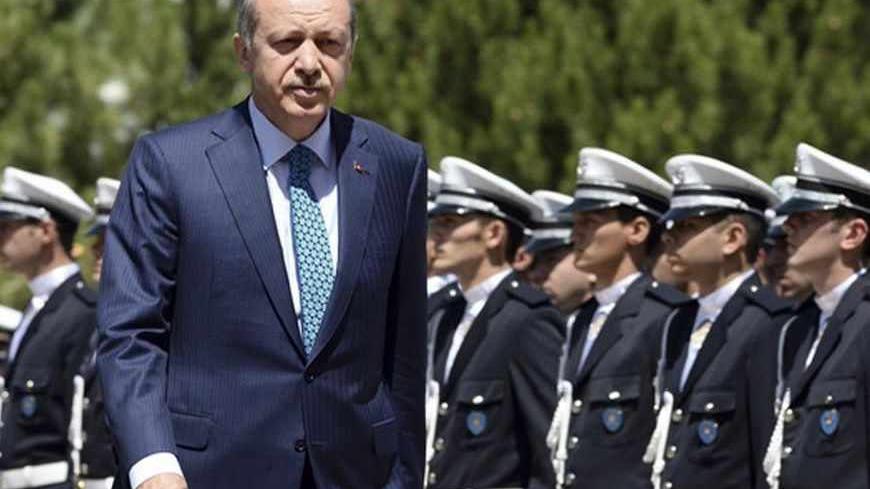 Turkey's Prime Minister Recep Tayyip Erdogan reviews students of the Police Academy upon his arrival to their graduation ceremony in Ankara, June 24, 2013. - REUTERS

Can anyone with a sane mind watching the movie “World War Z” in a Turkish cinema ever think that he lives in a normal country? It is the Turkish movie subtitles that prompt a sane person to think that this is a country gone amok.

References to the country named “Israel” and the city named "Jerusalem" heard in the original version of the movie were discarded. Instead of being translated, they were tweaked to a single word that defines a wide geographical and political region. In the subtitles, Israel and Jerusalem had both become the "Middle East."

Whose insanity or hatred has led to this incredibly inane and unnecessary censorship of Israel and Jerusalem? Whatever the reason, it certainly reflects an abnormal psychosis that opts to escape reality. I am sharing this subtitle outrage because it represents the reactions to the image of Israel in Turkey. No doubt it is not a fundamental indicator but it is topical, and it at least offers a clue.

But for Deputy Prime Minister Besir Atalay, who until now was recognized for his moderate profile, to blame the Gezi Park protests on the "Jewish Diaspora” is a basic indicator of the government's attitude. In a talk Atalay gave in Kirikkale, a town in Central Anatolia, he made a connection between the "Jewish Diaspora” and the international media’s coverage of the Gezi Park protests:

"There are those who envy us, who are jealous of Turkey’s great growth. All of them are coming together. On the one hand, there is the Jewish Diaspora … You saw the attitude of the foreign press to the Gezi Park events. You saw how quickly they were bought and started their coverage instantly without assessing the events."

The AKP government spokesmen, in their first organized reactions after May 31 to the Gezi Park protests, branded the demonstrations as "an international plot” and placed “the interest rate lobby” at the center of it. The traditional narrative of the Islamist political culture that identified “Judaism” with “usury” in a short time promoted the perception that what they mean by "interest lobby” is the "Jewish lobby," and in a wider sense Jewry. The AKP spokesmen did not make any visible effort to change this perception.

This naturally leads us to another question: How and with what moral authority will an Islamist government that has produced so much anti-Semitic conspiracy theories following the Gezi Park protests now be able to manage the normalization process with Israel?

We have to remember that this is a normalization process between Turkey and Israel worked out under the auspices of US President Barack Obama. The goal of that initiative was to normalize the relations that were severed between the two countries after the May 31, 2010 "flotilla affair” during which the Israeli military killed nine Turks, one of them a US citizen, in an attack against the Mavi Marmara ferry that was carrying hundreds of Turkish activists demanding the lifting of the Israel blockade on Gaza.

On March 22 — four days after he formed his new government — Israeli Prime Minister Benjamin Netanyahu, accompanied by Obama who was visiting Israel at the time, telephoned Turkish Prime Minister Recep Tayyip Erdogan to express his apologies for the deaths that occurred because of "operational errors." Erdogan accepted the apology. Then, both sides made official declarations and formal contacts aimed at normalization.

Here, we must underline that there was no more need in the turbulent waters of the Arab Spring for a "cold war with Israel" anchor that Turkey's Islamist rulers relied on to preserve their presumed justified positions with the Arab people. This loss of function had become more evident after it became clear that Syrian President Bashar al-Assad was not going anywhere in the foreseeable future. To this, we must add the rich "political capital" they thought they had amassed by being anti-Israel, and that turned out to be inadequate in competing with Cairo and Doha when it came to influencing Hamas.

Finally, we must also remember that the cold war format with Israel was becoming too expensive politically for Erdogan in his relations with the Obama administration and US Congress.

I concluded my March 25 Al-Monitor article, titled “Israel Apologizes; Turkey Steps Back,” with this sentence: "We must nevertheless be very careful since 2009 perceptions of Israel in Turkey have been disproportionately and negatively conditioned by the 2009 Davos affair."

The AKP government’s reaction to the Gezi Park protests, with its anti-Semitic implications, could be an outcome of the political reflexes of Turkish Islamism. It was, however, the anti-Israel attitude that became significantly pronounced after 2009 that made the AKP’s popular base adopt that perception easily.

Following the AKP actors explaining the Gezi Park protests as an international plot centering on the Jewish lobby, their definition of the Egyptian coup as the second link of a chain of plots against elected Islamist governments makes normalization with Israel even more complicated.

Practically speaking, this normalization process has three concrete pillars. The first is the question of compensation. Israel wants to pay $100,000 compensation for each victim killed by Israeli soldiers. As far as we know, Turkey wants $1 million per victim. Israel is defending the $100,000 figure by saying this is a generally accepted amount paid in international incidents. Turkey will thus be able to label each dollar it might get from Israel as a political success.

The second step will be to sign an accord that will put on record that the dispute between the two countries has ended, with all its legal ramifications and ratification of the accord by the Turkish parliament and the Israeli Knesset.

The same question from a different angle: How can an AKP government prepare the ground to conclude such an accord and submit it to the parliament in the coming months, as the party is preparing for critical elections?

Finally, at a certain point in the process, ambassadors will be exchanged. The single concrete outcome that will be attributed to Erdogan by stalling the normalization process with Israel at this phase — not by Israel but by Ankara — will be the considerable damage to the cooperation base that he had built with Obama. Therefore, the biggest share of the ostentatious red carpet welcome given to Erdogan in Washington is his commitment to the normalization process.

Meanwhile, Erdogan’s plan to visit Gaza via the Rafah border crossing in Egypt in July to change the negative outlook in Turkey has been indefinitely postponed because of the coup in Egypt. If Erdogan had gone to Gaza, it would have been at the cost of breaching the accord with Obama — if there is going to be a visit to Gaza, a stopover in Ramallah is necessary.

At the moment, it is impossible for Erdogan to go to Ramallah without first exchanging ambassadors with Israel. It is not physically possible to go to Ramallah via Amman, Jordan. It is a strange twist of history that requires the Turkish prime minister to normalize relations with Israel before he can visit Gaza and Ramallah. It is not possible to be optimistic about this.

Once again, we see that the most reliable instrument of true normalization between Turkey governed by Islamist Erdogan and Israel under right-wing Netanyahu is a sustainable Israel-Palestine peace process.