Time not right for Turkish-Israeli reconciliation

Neither Turkish Prime Minister Recep Tayyip Erdogan nor Israeli Prime Minister Benjamin Netanyahu are ready to do what is necessary to begin to normalize relations. 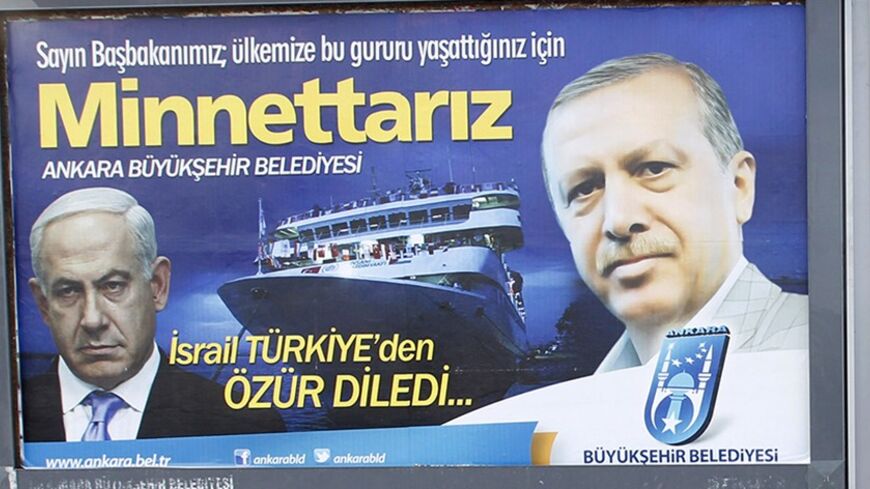 That Israel-Turkey relations closely affect the tone of Turkey-US relations and how they have progressed are a “dogma” that is recognized by Turkey, as well as by the foreign policy community of our ally across the Atlantic.

For Prime Minister Recep Tayyip Erdogan and his associates, the influence of these relations on domestic politics is a major perception issue. For example, behind every move labeled as an effort to remove Erdogan from power it is imperative to look for US-Israeli “involvement.”

It became a habit to search for Israel behind every tremor the government experienced after the harsh polemic of January 2009 at Davos between Erdogan and Israeli President Shimon Peres, and particularly after the Mavi Marmara flotilla incident of May 2010, which resulted in the deaths of nine Turkish citizens and sent bilateral relations crashing down.

Although not said in so many words in public, the corruption investigation that began on Dec. 17, 2013 — and became the biggest challenge Erdogan faced in 12 years of his rule — was branded as a “coup attempt” and rumors spread that Fethullah Gulen, the Turkish cleric living in self-imposed exile in Pennsylvania for the past 15 years, and his supporters were actually “Israeli operational elements.”

Deputy Prime Minister Besir Atalay linked the Gezi Park protests in Istanbul last summer, which became the first important challenge to Erdogan, to the “Jewish diaspora,” while Erdogan associates found the “interest rate lobby” was behind the incidents. They did not shy away from passing the word around that what they meant by “interest rate lobby” was pro-Israeli Jewish financial circles in the United States.

Meanwhile, Turkey-US relations peaked on May 16, 2012, when Erdogan was given a rarely seen welcome at the White House by President Barack Obama. Reliable Washington sources at the time said such a reception signaled Obama’s expectation of improvement in the relations of two allies after he had Netanyahu apologize to Turkey.

It wasn’t a surprise that Obama-Erdogan relations began to cool when that expectation did not materialize and even led to further disappointment.

That is why when Foreign Minister Ahmet Davutoglu last week said on TV that Turkey and Israel were as “close as ever to reaching an agreement,” it didn’t attract much attention in Turkey, where the public is dazed by domestic developments, but it reverberated loudly in Israel.

The influential daily Jerusalem Post reported: “Turkey and Israel are as close as they have been yet to ending the long-running saga over the Mavi Marmara incident, Turkey's Foreign Minister Ahmet Davutoglu was quoted as saying Sunday. … The Prime Minister's Office and the Foreign Ministry were instructed not to talk about the issue.”

But just 48 hours after Davutoglu’s surprising statement, Erdogan showed he was not particularly enthusiastic about improving Turkey-Israel relations by announcing that normalization of relations required the lifting of the Gaza blockade. Israeli newspapers quickly reported that Israeli Prime Minister Netanyahu had not approved the reconciliation agreement that had been reached.

To ask whether Netanyahu or Erdogan is primarily responsible for blocking improvement in Israel-Turkey relations is no different than arguing about the chicken and the egg. The reluctant attitude of the two leaders is primarily based on their domestic political considerations, but the result is impeding the Israel-Turkey rapprochement that the United States very much wants to see.

Obama in March 2013, after having Netanyahu call Erdogan from the tarmac of Ben Gurion Airport to apologize for the flotilla incident, said Turkey and Israel did not need to agree on every point to be able work together for security and other issues of the region.

Never mind not agreeing on the nitty-gritty, the countries' prime ministers are not even prepared to endorse the reconciliation worked out by their high-level bureaucrats.

As a matter of fact, reconciliation talks were renewed in early December 2013 after a long period of stagnation. The move to resume the negotiations had come from Turkey, which offered to hold a round of talks in Istanbul. The Turkish side was led by Foreign Ministry Undersecretary Feridun Sinirlioglu, a diplomat who knows Israel best and is considered the most capable diplomat on the Turkish side to rebuild Israel-Turkey accord. Sinirlioglu was Turkey’s ambassador in Tel Aviv during the warmest days of relations between the two countries.

A news item appeared in the Israeli daily with the largest circulation, Yedioth Ahronoth, referring to the Army Radio report: “Prime Minister Benjamin Netanyahu has rejected the draft of a reconciliation agreement with Turkey, Army Radio reported Thursday. The report cited a source familiar with the talks as saying Netanyahu was afraid of the reaction from the right over the high compensation for families of those killed in fighting when the IDF [Israel Defense Forces] boarded a Turkish Gaza-bound boat in 2010. The draft includes a payment of more than $20 million to the families of the nine Turkish nationals who died on the Mavi Marmara on May 31, 2010. However, as days went by and the prime minister seemed in no hurry to sign off on the agreement, Army Radio said, the Turkish side began to believe that Netanyahu was in no rush to close the deal, which led to Turkish Prime Minister Recep Tayyip Erdogan's call on Wednesday for Israel to lift the siege on Gaza as part of the agreement.”

Ultimately, Netanyahu proved to be reluctant in endorsing a deal he had previously seemed eager to conclude. Erdogan’s statement, which had the effect of killing the optimism generated by his foreign minister’s remarks, was, according to the prestigious Israeli daily Haaretz, motivated by internal politics.

Absolutely right. Following the Mavi Marmara incident, Turkey issued two demands to Israel: an apology and compensation payment. But in July 2011, Erdogan — who had a gained a great deal of esteem in the Arab world for being seen as the “champion” of the Gaza Strip and the “darling” of the Arab street — added another condition for the normalization of ties: that Israel lift the blockade of the Gaza Strip.

The first demand was met thanks to the efforts of Obama in March 2013. The second demand was about to be met according to the reconciliation document in February 2014. Erdogan, who knew well that Israel would not accept at this time the third condition, nevertheless could not give up asserting this condition.

Just as he was nearing the most difficult junction of his political life and facing a series of elections, Erdogan could not allow airing of the propaganda that he had “forgotten about Gaza” and that he had agreed to “$20 million in return for the Turkish blood Israel spilled.”

The result is that neither Netanyahu nor Erdogan are willing for reconciliation. Not yet.

US calculations and strategic Turkish and Israeli strategic interests can be sacrificed for the immediate demands of domestic politics.

This is the Middle East, where foreign policy can be local politics as well.