Several emissaries are trying to reconcile Turkey and Israel, but the latter feels that resetting relations requires a sincere change of approach: an end to Turkish President Recep Tayyip Erdogan's declarations against Israel and to his support for Hamas terror. 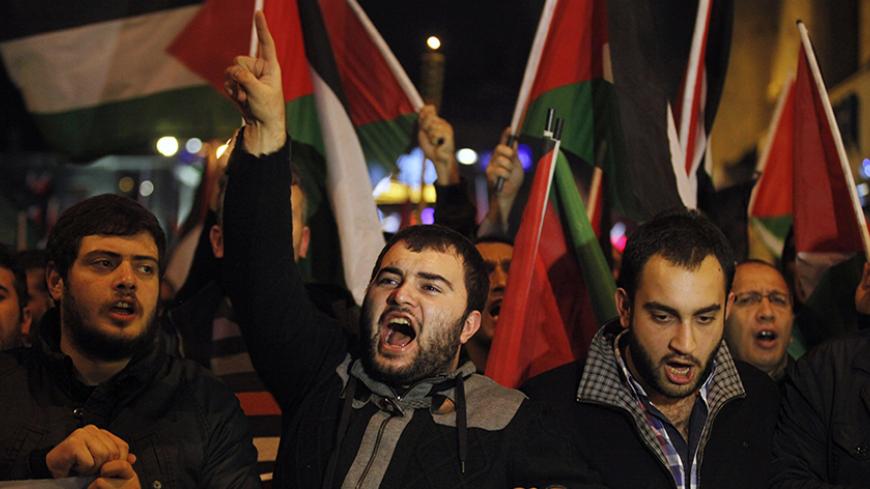 “Turkey has to solve the problem of Saleh al-Arouri [a Hamas leader exiled from the West Bank who lives in Turkey]. It is unthinkable that a NATO member should allow terror acts from its territory.” Defense Minister Moshe Ya’alon said this in a conversation with Al-Monitor last month, after returning from his trip to the United States on Oct. 21. He said it even before the Shin Bet revealed Nov. 27 the involvement of what it called the “Hamas command center in Turkey” in planning terrorist attacks in Jerusalem and in training the bombers.

In an interview with IDF Radio after this disclosure, Minister of Strategic Affairs Yuval Steinitz called on the United States and NATO to apply pressure on Turkey to stop supporting terrorism. Senior officials in Ankara with whom I spoke following these remarks expressed concern that any official Israeli request to NATO in the same vein would only erode the bilateral relationship even further. From my own investigation into the matter, I learned that Israel did not make such an official request of NATO, at least not yet.

Senior diplomatic sources emphasize that Israel has absolutely no interest in reaching a state in which it must sever its relationship with Turkey. They add, however, that in the absence of any channel of communication between the two governments, publicly linking Turkey to Hamas terror is intended to show Ankara that there is a cost for President Recep Tayyip Erdogan’s ongoing verbal assaults against Israel and the aid that he provides Hamas.

The accusations heard in Israel are yet another steep descent in the roller coaster ride that is the management of diplomatic relationship between the two countries. This relationship first started to deteriorate in 2009 when Erdogan, then prime minister of Turkey, lashed out at Shimon Peres, then president of Israel, at the World Economic Forum in Davos in the wake of Operation Cast Lead, which ended just a few days earlier.

Even while Israel tries to indict Turkey for supporting terrorism, and Erdogan attacks Israel at every available opportunity for its treatment of the Palestinians, Ankara is continuing to send a series of positive messages to Israel about its desire to complete normalization between the two states. This reconciliation began almost two years ago, during US President Barack Obama’s visit to Israel. In an interview with the Turkish Hurriyet Daily News on Oct. 25, a senior Turkish official said that the goal now is to raise the level of diplomatic relations between Israel and Turkey and to exchange ambassadors, recalled by their respective countries in September 2011 once the compensations are paid as agreed.

In addition to this declaration, the foreign minister of the Turkish Republic of Northern Cyprus, Ozdil Nami, participated in an energy conference in Israel with the blessings of his patron from Ankara. The senior official in the Israeli Embassy in Ankara, Chargé d’Affaires Yossi Levy-Sfari, was invited to attend the inauguration celebrations for Erdogan, shook Erdogan’s hand, and even exchanged some polite words with him. It was the first time that Erdogan shook hands with any official Israeli representative in six years.

Amira Oron, who will be replacing Levy-Sfari as the chargé d'affaires in the Ankara embassy, will do the same with the consent of the Turkish Ministry of Foreign Affairs, even though she is a more senior diplomat than her predecessor. In the Foreign Office in Jerusalem there are some who see this as yet another “positive message that relations are being upgraded.” However, to complete the current course toward normalization, as was agreed after the Mavi Marmara tragedy, the Israeli prime minister must first approve the compensation agreement formulated and completed in the last round of talks, held in Jerusalem in January. The problem is that Prime Minister Benjamin Netanyahu is not convinced by these aforesaid Turkish gestures. He continues to avoid signing the document, thereby delaying the entire process. For Netanyahu, experience has shown that Erdogan will turn every Israeli compromise into a battering ram with which to attack the State of Israel and Netanyahu himself.

It seems that if Turkey really is interested in seeing the normalization process through, it must initiate a significant trust-building move that will enable Netanyahu to come to terms with the agreement and approve compensation payments to the families of the Marmara casualties. At a strategic dialogue conference organized in Istanbul by the Mitvim Institute for Foreign Policy, it was underscored that Turkey can use its ties with Hamas to moderate it and in so doing, delegitimize acts of violence. Ankara does regard Hamas as the most significant Palestinian factor and therefore supports it, but it is now incumbent on Turkey to go back to taking a more holistic approach to the conflict by supporting other Palestinian groups. If it also has the good sense to distinguish between its support for the Palestinian struggle and its diplomatic relationships, it could indeed become an influential player in the region.

In general, Turkey must adopt a more pragmatic and less emotional approach to the issue of Israel. It must find a moderating role for itself as the Israeli-Palestinian conflict escalates. That does not mean that Ankara must put a stop to any legitimate criticism it might have of Israel policy. It can take an example from the Jordanian monarch. While he does not hold back when it comes to sharp criticism of Israel, he also sponsors diplomatic meetings to calm the situation, including with the prime minister of Israel. According to the Israel-Turkey Chamber of Commerce, economic ties between the two countries are once again slated to break records this year (trade between the two countries totaled approximately $5 billion last year). This only proves that the government in Ankara knows how to act pragmatically when it wants to.

In a conversation with Al-Monitor, a senior Israeli minister said that in the current state of affairs, “if Turkey wants normalization with Israel, let it send an ambassador here unconditionally. We can complete the agreement then.”

The Turkish representative on the Palmer Committee that investigated the Marmara flotilla incident, Ozdem Sanberk, was also the one who formulated the road map to normalization together with his Israeli colleague Joseph Ciechanover. At the end of November. he expressed his regrets that the ambassadors were not sent back to their embassies (after being called back to their capitals in 2010) after the phone call in which Netanyahu apologized to Erdogan in March 2013. Sanberk did this at a Turkish-Israeli conference organized by the Israeli Consulate in Istanbul and the local Kadir Has University.

It would seem that five years after the Mavi Marmara tragedy, it was time to change the agenda and take dramatic steps to rebuild trust between the two parties, even before compensation is paid and Turkish indictments and legal steps against Israel Defense Forces officers and commanders are dropped.

Quite a few “normalization entrepreneurs” or “emissaries of reconciliation” have been active on the Jerusalem-Ankara line over the past few days. They are trying, sometimes in coordination with some official body or other, to find a formula that would lead to the normalization of diplomatic relations between the two countries and thereby advance their business interests. However, as long as the Turkish president insists on allowing Hamas to operate from within its territory and continues to attack Israel at every available opportunity, Netanyahu's associates reiterate emphatically that he is finding support for his position. Meaning, Netanyahu is convinced anew that when it comes to Erdogan, it is impossible to close any deals.