US persuaded Turkey to include Israel in NATO drills

Leaked emails between the Obama administration and Turkish senior officials reflect US efforts at reconciling Israel and Turkey — when the latter objected to Israel's participation at a NATO sea drill. 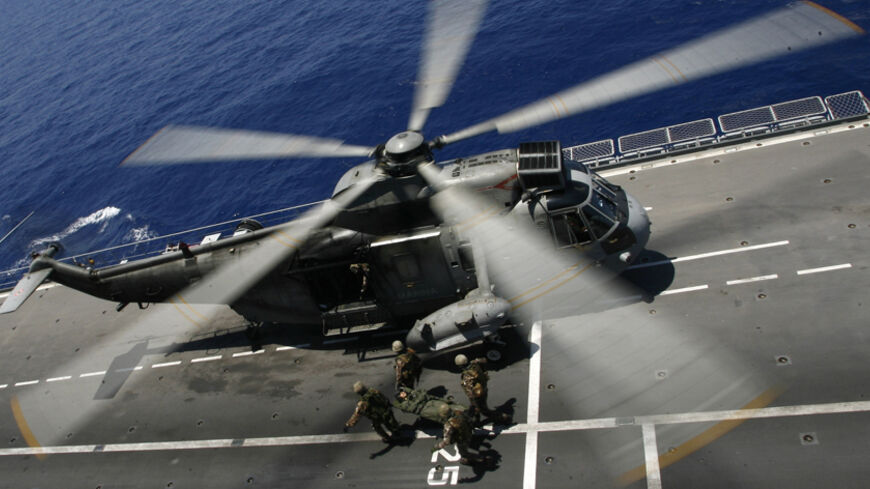 Soldiers maneuver close to a helicopter aboard an aircraft carrier during the NATO operation codenamed "Unified Protectors" in the Mediterranean Sea, June 15, 2011. - MARCELLO PATERNOSTRO/AFP/Getty Images

Israeli-Turkish relations continue to be tense as if there had not been an apology concerning the Mavi Marmara flotilla events. New charge d'affaires Amira Oron was appointed at the beginning of the year to the Israeli Embassy in Ankara, and there is no sign of a normalization of diplomatic relations and exchange of ambassadors on the horizon. On the contrary, Turkish Foreign Minister Mevlut Cavusoglu withdrew his participation in a security summit in Munich in February after “he found out” that an Israeli representative would also participate in the Middle East session. This move is unprecedented since the start of the rift in ties between the countries, when in 2009, Recep Tayyip Erdogan, prime minister at the time, lost his self-control in front of then-Israeli President Shimon Peres.

When Erdogan recalled the Turkish ambassador, the Turkish Embassy in Tel Aviv was the only one in the Middle East that was not manned by an ambassador. But since then, the Turkish ambassadors to Syria, Egypt, Libya and Yemen have also been recalled. Apart from the fact that the ambassador to Tel Aviv was the first one called home, the United States invested unique efforts in attempts to repair the relations between its two important allies in the region. The height of these efforts was the phone call where Israel’s prime minister apologized to the Turkish prime minister, in the presence of the US president.

Several communications have recently been exposed in leaks from the "Syrian Electronic Army," which penetrated governmental computer systems in Turkey, enabling an interesting and rare peek into the many efforts the United States has invested to reconcile Jerusalem and Ankara.

In September 2011, in an effort to get an Israeli apology and reparations for the killing of Turkish activists on board the Mavi Marmara — in the framework of the Palmer Commission appointed by the UN secretary-general — Turkey implemented a “punishment plan” against Israel, which consisted of three elements: lowering the rank of diplomatic relations; judicial action against Israel Defense Forces (IDF) soldiers and commanders; and damage to Israel’s activity in international organizations.

The main tool in Ankara's hands in that third component was its full and senior membership in NATO. Israel, as we know, is not a member of the alliance but enjoys a Major Non-NATO Ally status. Ankara identified this point of weakness and started using its right to veto Israel’s participation in the activity of the strategic alliance, which is important to Israel's security.

In this context, the email message sent on Sept. 11, 2012, by Francis J. Ricciardone, then-US ambassador to Ankara, to Undersecretary of Foreign Affairs Feridun Sinirlioglu, who was (and still is) in charge of the Israeli portfolio at the Ministry of Foreign Affairs in Ankara and is a key contact both for Jerusalem and Washington, is telling. “Feridun,” he writes, “what we have from our Israeli friends is that, if the NATO Minotaur exercise happens, IDF would limit their participation 'observers.' Thus there would be scant chance of IDF + TU forces being credibly accused of 'exercising' together: The Israelis will be observing, not exercising nor 'participating,' in the active sense of the other NATO + partner forces. Phil discussed this w/ HC, w/ Bill Burns + Wendy Sherman present. She hopes GoT [Turkish government] will find this sufficiently reassuring to permit this matter to move forward.”

Israeli sources believe that Ricciardone was writing about the NATO exercise, to rescue a sunken submarine, which was supposed to take place off Norway’s shore. Israel sees great importance in exercises and in the lessons learned from such activities, and thus it asked the United States to work with Turkey to enable it to at least observe with a low profile. Sherman is a US undersecretary of state, who is today in charge of negotiations with Iran. Burns was the deputy secretary of state (Hillary Clinton was secretary of state at the time), and Phil is probably Philip Gordon, Clinton’s senior assistant for European and Eurasian affairs.

The US efforts bore fruit, and in December 2012 Turkey announced that it is removing its opposition to Israel's participation in the NATO activity "as long as contact is not established between Turkish and Israeli forces."

Ricciardone also tried to improve the atmosphere between the two nations and to foster gestures of goodwill. On April 6, 2012, on Passover eve, he wrote to the undersecretary of foreign affairs: “Feridun, you have so many Jewish friends and have been to so many seders [Passover night ceremonial meal] that you probably know that this evening is the Jewish Passover, one of the most special nights of the year, celebrating their liberation from the Pharaoh's Egypt. I’ve sent my greetings (Hag Semeach) to the Haham Basi [the chief rabbi for Turkish Jewry] and Israeli Charge [d'affaires], among other official and personal friends. If FM has offered any official or personal greetings to the Jewish community (or even the Israeli people), I would be very happy to quietly inform Washington of such a gesture.”

It is important to note that even before this request Erdogan would usually offer greetings to Turkish Jews on the Jewish New Year and Passover. However, on that very night the Turkish Ministry of Foreign Affairs made sure to highlight the fact that the prime minister publicized such a greeting and tried to push its publicity in Israel. Rafael Sadi of the Association of Turkish Immigrants in Israel checked the wording for Al-Monitor, and it seems that only since 2013, after Netanyahu apologized to him, did Erdogan start to address his greetings not just to the Jews of his country but to Jews worldwide.

A Turkish source who is closely involved in the exchange of messages between Ankara, Jerusalem and Washington stressed that the United States made sure, again and again, to emphasize to the Turks the strategic importance it sees in repairing the relations between Ankara and Jerusalem, and did not spare any gestures, efforts and means to try to reconcile the Turks and to advance normalization between the countries. According to him, the efforts took place incessantly, on various levels and ranks simultaneously.

A spokesman for the US Embassy in Tel Aviv, Geoff Anisman, who was queried about these issues and was asked whether Washington continues to work to repair relations between the countries, told Al-Monitor, “The United States deeply values our close partnership with both Israel and Turkey. We have strong and long-standing ties with both countries, and fully support the restoration of positive relations between them.”

It may be that the results of the Israeli elections March 17 and the new government that will be formed will create an opening for normalization of relations with Turkey. Or it may not. However, on the day of Netanyahu's speech to the US Congress, when it seems that Jerusalem doubts the US president’s commitment to Israel, it is important to stress that even if the ambassadors have not yet returned to their posts, the many efforts Washington invested in Ankara enable Israel to be part of NATO activity — another critical element in defending its security.