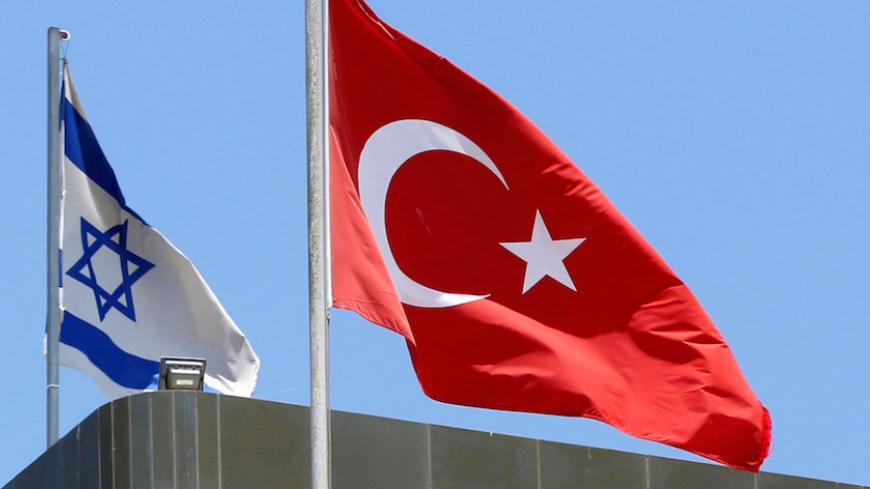 A Turkish flag flutters atop the Turkish Embassy as an Israeli flag is seen nearby, in Tel Aviv, Israel, June 26, 2016. - REUTERS/Baz Ratner

The announcement Oct. 25 on the Israeli Ministry of Foreign Affairs internal messaging system regarding the cancellation of the meeting of the appointment committee, which was set to take place in two days in order to appoint an Israeli ambassador to Ankara, disappointed many diplomats in Jerusalem and at Israeli missions abroad. Several senior officials at the ministry submitted their candidacy for this important and desirable post, despite the many security risks involved in heading the Israeli diplomatic mission in Turkey these days. The most prominent among the potential candidates were Eitan Naeh, currently the deputy ambassador in London; Emmanuel Nahshon, the ministry spokesman in Jerusalem; Irit Ben Abba, the ambassador to Athens; and Amira Oron, the charge d’affaires of the embassy in Ankara.

Sources close to Prime Minister Benjamin Netanyahu hinted before the cancellation of the committee meeting that Netanyahu prefers to appoint a close associate — a political appointment — but the ministry’s announcement said that “in light of the changes stemming from the resignation of the ministry’s director general, Dr. Dore Gold, it was decided to wait to convene the committee until the end of the process of installing Yuval Rotem as interim director.” Or, in a loose translation from diplomatic speak: Netanyahu, who also serves as foreign minister, wants to hold on to the ambassador post as a consolation prize for someone who feels put out by the changes at the top of the ministry.

Either way, by delaying the appointment, the prime minister delays the last step in the normalization agreement signed and authorized on June 27; the agreement was already supposed to be fully implemented. This is a move that requires some explanation in light of the fact that Turkey already has announced the name of its intended ambassador to Tel Aviv, Kemal Okem, and that Erdogan’s press secretary Ibrahim Kalin said two weeks ago that he expected the ambassadors to be exchanged within a week to 10 days.

This isn’t the only mishap in the implementation of the reconciliation agreement, which is meant to normalize relations between the two nations, which underwent a serious crisis following the Marmara incident in May 2010. At the time, Israel Defense Forces (IDF) soldiers killed 10 Turkish citizens in a violent confrontation while taking over the Mavi Marmara as it was sailing to Gaza as part of the solidarity flotilla. Following this event, Turkey called its ambassador back from Tel Aviv and expelled the Israeli ambassador from Ankara. On Oct. 19, an Istanbul court refrained from rejecting a criminal lawsuit brought by the families of those killed on the Marmara against IDF commanders and set another hearing for December. The termination of criminal proceedings against IDF officers related to the Mavi Marmara incident is a central element of the reconciliation agreement, as part of which Israel paid $20 million in compensation for the loss of life in the takeover of the flotilla.

After Yom Kippur on Oct. 13, Energy Minister Yuval Steinitz paid the first official visit of an Israeli minister to Turkey since the agreement was signed. In Istanbul, Steinitz met with his Turkish counterpart, Berat Albayrak, and discussed the advancement of a gas pipeline between the Leviathan natural gas reserve off of Israeli shores and Turkey, which was one of the main incentives of the reconciliation agreement. Steinitz told Al-Monitor that the meeting with his counterpart, who is Erdogan’s son-in-law, was “very friendly and excellent.” The two also held a 45-minute meeting one on one, without advisers, in which they discussed “a variety of topics related to what’s happening in the region,” Steinitz said. He refused to disclose more “for understandable reasons.” According to Steinitz, the two decided to establish a direct line between them, which would work as a channel of communication between the two governments. However, in the public speech Albayrak delivered at the energy conference immediately after he met with Steinitz, he didn’t say a word about Israel or the honored guest with whom he held a historic meeting right before.

Likewise, the Turkish Foreign Ministry didn’t send an official notice of condolence after the Sept. 28 death of Israel’s ninth president, Shimon Peres. Peres worked tirelessly to advance reconciliation between the two countries, despite Erdogan’s outburst at him at the Davos summit in January 2009, which I previously noted here was a turning point in the Turkish leader’s political evolution. Erdogan sent Feridun Sinirlioglu to Peres’ funeral — Sinirlioglu is the former undersecretary at the Foreign Ministry who conducted the reconciliation negotiations with Israel; today he serves as his country’s UN ambassador. Sinirlioglu, who once served as ambassador to Israel, is highly respected here. But in comparison with the heads of state and ministers who came from all over the world to pay respects to the late President Peres, he was low in ranking.

Israeli and Turkish diplomats who spoke with Al-Monitor on condition of anonymity each noted separately that the way Israel responded to the failed July 15 coup attempt about two weeks after the reconciliation agreement was signed angered Erdogan no less than the responses of the United States and EU nations. Israel’s government was very late to condemn the coup attempt. Two days later, at a government meeting July 17, Netanyahu issued a lordly statement that refrained from expressing support for Erdogan but expected that “the events over the weekend,” in his words, shouldn’t hurt the reconciliation process.

Erdogan gritted his teeth. But while he expressed vocal criticism against the United States and EU nations, when it came to Israel he bit his lips. Statements against Israel just days after signing the agreement would have made him look ridiculous to the Turkish public, as if he had made a mistake when he decided to normalize relations with Netanyahu. Thus, he held back and continued to do his part in the reconciliation process, although without extra enthusiasm. The agreement was authorized as required by the parliament in Ankara, but in the middle of the night, at the last minute before adjourning for its summer recess. Erdogan then waited several long days before adding the presidential signature that turned the agreement into law. Officials at the Foreign Ministry in Jerusalem raised an eyebrow when Turkey took its time in delivering the bank details for the account to which Israel ultimately transferred the $20 million in compensation to the fund for the casualties of the Marmara and their families.

Jerusalem and Ankara are both sensitive to these mutual gestures. The two sides emphasize their commitment to uphold the conditions of the agreement. But both Netanyahu and Erdogan feel comfortable enough (each on his home turf) to leverage its implementation according to the domestic political needs of the moment. The two are chained to the reconciliation agreement, which they now have no option but to carry out. Nonetheless, in light of these developments, it’s convenient for both to let the reconciliation between their nations be a cold one.