Turkey-Israel: Toward A 'Cold' Normalization

The second round of compensation talks between Israel and Turkey should not raise hopes in Jerusalem of re-establishing the former ties between the two countries, writes Arad Nir. 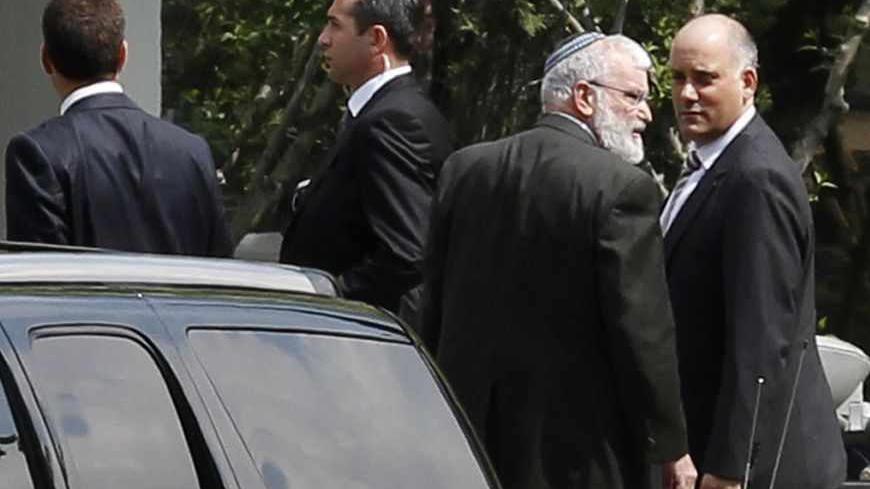 An Israeli delegation arrives at the Turkish Foreign Ministry to hold talks on compensation for families of victims killed in a 2010 naval raid on Turkish-led humanitarian-aid convoy to Gaza, in Ankara, April 22, 2013. - REUTERS/Umit Bektas

An official Turkish delegation arrived in Jerusalem on Monday [May 6], for the first time since the Turkish flotilla to Gaza in 2010.

The delegation, headed by Turkish Foreign Ministry Director-General Feridun Sinirlioğlu, met for several hours with Israel’s national security adviser, Yaakov Amidror, who delayed his departure for an official visit to China with Prime Minister Benjamin Netanyahu to receive the group, and with former Foreign Ministry Director-General Yosef Ciechanover. This was the second round of talks between the sides. That same evening the prime minister’s office announced that final agreement on a reconciliation agreement between Israel and Turkey would soon be reached, bringing an end to the crisis between the two countries.

“Reconciliation,” as I wrote here previously, does not mean “going back to the way things were,” but Israel does not appear to have understood.

The first round was held in Ankara on April 22. Amidror and Ciechanover were given a cordial welcome when they arrived in the Turkish capital by private plane to discuss Israeli compensation to the families of those killed on the Marmara flotilla. The talks in Ankara were also conducted in good spirits and both sides stressed their intention to finalize the compensation negotiations as quickly as possible.

Nonetheless, along with the good will displayed at the first meeting, the Turkish hosts felt embarrassed and enraged following the Sunday Times report to the effect that the Israeli negotiators were coming to Ankara with a long list of proposals and requests for military cooperation. It was as though relations had not been virtually severed for over three years.

According to the report, Israel was going to suggest a deal whereby it would be allowed to station planes in Turkey, there to await an order to attack Iran — if and when one is given. In return, Israel would provide Turkey with anti-missile arrow batteries and technologically advanced military systems.

The Foreign Ministry in Ankara rushed to deny the report on the same day. The following day, after it was prominently reported in the Turkish media, a formal denial was even issued, terming the report “completely speculative and malevolent in nature.”

The phrasing of the official foreign ministry announcement reflected the frustration and anger at what Turkey regards a deliberate Israeli leak. Official sources with whom I spoke in Ankara assessed that the report was an Israeli attempt to put the cart of military cooperation before the horses of normalization and reconciliation. In their view, Israel was wrong once again about the process Turkey is undergoing and the intentions of Prime Minister Recep Tayyip Erdogan and his foreign minister, Ahmet Davutoğlu.

In fact, the Turkish government has set a clear and targeted aim for normalization. They call it “the day before the Marmara killing.” In other words, the complex relations will remain limited in nature! If anyone in Israel still hopes for that same strategic defense and economic alliance that existed between the two countries until some 10 years ago, they can forget it.

So, what did Israeli-Turkish relations look like on “the day before the Marmara"?

“The day before the Marmara” in Israeli-Turkish ties started, in fact, on Dec. 27, 2008, the day Israel launched “Operation Cast Lead.” Israel’s then-Prime Minister Ehud Olmert ordered the start of the operation against Hamas in Gaza five days after being accorded a warm welcome at Erdogan’s official residence in Ankara. That meeting, by the way, was the final note of Turkey’s failed attempt to negotiate between Israel and Syria.

I believe Erdogan was truly distressed at seeing the pictures of death and destruction wrought by IDF bombings in Gaza and enraged at their timing, so soon after his intimate meeting with Israel’s prime minister. This is the reason for his vitriolic attacks on Israel and its operation in Gaza, which he termed a “crime against humanity” and “a display of disrespect toward Turkey.”

The next step took place on Jan. 29, 2009, at the annual economic conference in Davos, Switzerland. During a panel discussion with his Israeli colleague, President Shimon Peres, Erdogan lashed out, "when it comes to killing, you know very well how to kill," leaving the stormy debate which was cut short by the moderator, David Ignatius.

Upon his return to Turkey after the incident, Erdogan was given a victor’s welcome. He was hailed as a hero throughout the Arab world and the incident in Davos itself became a watershed in the relationship between the two states.

In October of 2009 Turkey announced that Israel would not be taking part in the multinational military exercise “Anatolian Eagle.” Since then, all military cooperation between the two states has been suspended.

On Oct. 29, in an interview with Davutoğlu, the Turkish foreign minister stressed that Israel no longer had any special standing in Turkey. A strategic alliance? Only if the strategy is the vision of peace

Nonetheless, on that very same day Israel’s ambassador in Ankara took part in an official reception marking Republic Day, and the Turkish ambassador in Israel Ahmet Oğuz Çelikkol held a festive reception for Israeli VIPs. Yes, that’s the same ambassador who was summoned on Jan. 11, 2010, by then-Deputy Foreign Minister Danny Ayalon to clarify why Turkey’s official television station was airing an anti-Israel series, and was placed on a low chair in a clumsy attempt to insult him. Danny Ayalon subsequently apologized for the incident. Çelikkol was recalled to Turkey, returning there with the bodies of the Turks on the day following the Marmara takeover.

During the “day before the Marmara,” which in fact describes a fairly long period, Turkey did not spare any criticism of Israel’s conduct. For its part, the Israeli government tried to reciprocate with all the tools at its disposal. On the day before the Marmara, Israel’s ambassador in Ankara tried to prevent the sailing of the flotilla to Gaza, talking to government officials and conveying messages to the foreign ministry in Israel.

Ambassador Levy failed in his efforts to arrive at an accommodation between the sides over the flotilla, because on the day before the Marmara Israel was still under the misconception that the Turkish military “would sort things out.” It was not true then; it’s certainly not true now. Or as a senior official in Ankara told me clearly and concisely while the negotiating teams were working in the next room: Israel’s apology has not diminished the crisis of confidence between the Turkish and Israeli governments. Therefore, even when the process of normalization is over, the relationship will be open and above board. No secret agreements and no clandestine diplomatic activity. There will be no military cooperation, he said. The IDF will not be asked back to take part in the joint “Anatolian Eagle” exercise. Ankara will keep working for international recognition of Hamas, for internal Palestinian reconciliation, for the establishment of a Palestinian state and the promotion of a peaceful solution.

The report of a military deal being concocted along with negotiations over compensation is perceived in Ankara as part of the same archaic Israeli notion which places hopes in military cooperation between the two states, a kind of trial balloon which Ankara hasn’t spared any effort to pop. This is the only way to end the long and complicated process of rehabilitation, after which relations between the two sides can be rebooted from the point at which they were on the day before the Marmara.

Arad Nir Is the head of the foreign news desk and international commentator for Channel 2 News, the largest news provider in Israel. He teaches TV journalism at the IDC Herzliya and Netanya Academic College.