Israeli-Turkish Reconciliation Not a Done Deal 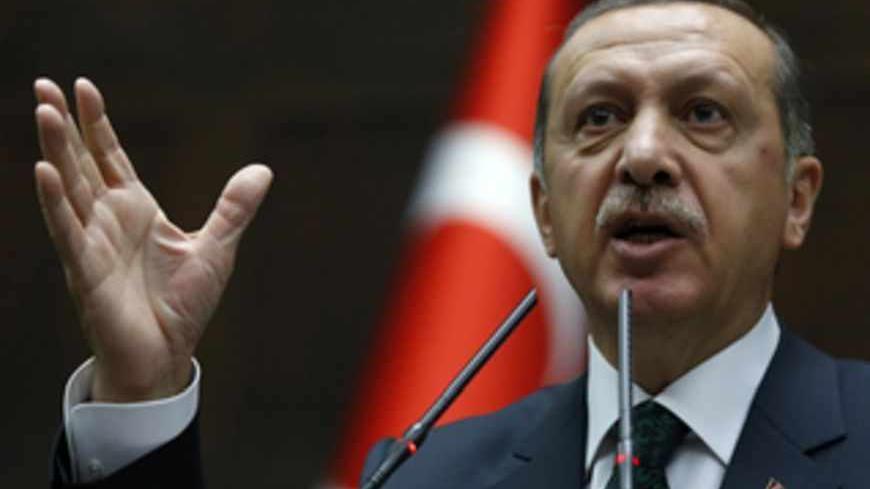 Exactly one month after that surprising phone call between Israeli Prime Minister Benjamin Netanyahu and his Turkish counterpart Recep Tayyip Erdogan under the protective gaze of US President Barack Obama, the two sides have finally started talking. An Israeli delegation consisting of two persons arrived in Ankara to meet with senior Turkish officials [April 22] and bridge the differences between the two countries. These emissaries are National Security Adviser Maj. Gen. Yaakov Amidror and the Special Emissary for Turkish Affairs Yosef Ciechanover. They have no simple task ahead of them. The Turks are demanding over $1 million for each of the victims' families in reparations, while the sum that Israel is talking about is considerably less. But money will not be the obstacle along the road to rehabilitating Israeli-Turkish relations.

Our story is much more complex and convoluted than mere money might suggest. It encompasses geopolitical and strategic processes of much greater weight. It involves a tectonic shift of the continental plates, which began long ago and which stands in conflict with the strategic interests of at least some of the key players in the Middle East, chief among them Israel and the US. And, as always, there is a substantive debate between two distinctly different approaches. The bad news is that as of the writing of this piece, the rehabilitation of Israeli-Turkish relations seems much more distant and problematic than was previously thought. It’s like a military march, with full gear and stretchers open, but with no clear end point.

In Israel, before the Obama visit, two main attitudes toward Turkey competed for supremacy. The first approach, and also the more draconian, was championed by former Foreign Minister Avigdor Liberman and Moshe (“Bugi”) Ya’alon, before his appointment as minister of defense. This approach claims that reconciliation efforts are a waste of time and energy. Erdogan didn’t decide to sever his relationship with Israel because of the Marmara flotilla raid. He actually made his decision long before that. This claim can be proved rather easily by examining a series of harsh incidents that occurred between the Turkish prime minister and his Israeli colleagues.

Chief among these, of course, is the Davos incident, in which Erdogan stormed off a panel he was on with President Shimon Peres. Erdogan is an Islamist, say the proponents of this viewpoint. He is the Muslim Brotherhood, and his party is a sister party to Hamas. He wants to sever ties with Israel so that he can become the Sunni leader of the Middle East. He wants Turkey to be the major power in the Mediterranean Basin. He would effectively like to restore the past splendor of the Ottoman Empire.

Of course, his path to glory crosses Israel’s metaphorical corpse. By humiliating Israel he empowers himself and enhances his image, just like Hezbollah Secretary-General Hassan Nasrallah once did. He becomes the guru of the masses. It wouldn’t help even if we were to apologize, claimed Liberman and Ya’alon. Erdogan would come to Gaza as a victor. He wouldn’t really renew his strategic relationship with us. He simply wants us to lift the closure order against Gaza. All that will come out of reconciliation is that we will end up paying an exorbitant price for defective goods, and that is if we get any goods at all.

The contrary approach — supported by former Defense Minister Ehud Barak, former Minister of Intelligence and Atomic Energy Dan Meridor, former Minister without Portfolio Benny Begin and others — argues that there is still considerable room for maneuvering between Israel and Turkey. True, Erdogan changed the face of Turkey and brought it to Islam, but that does not mean that he has no strategic interests in the Middle East. If the relationship is managed properly, Israel could be a part of those interests, especially given what is going on in Syria and the blows that Erdogan has suffered in Libya and elsewhere. Proponents of this approach admit that Erdogan will never renew the close strategic alliance between Israel and Turkey, and the status of the Turkish military is a shadow of what it once was anyway.

Nevertheless, they say, there is still a lot that can be done with Turkey. The fact is that the Muslim Brotherhood came to power in Egypt too, and as it turns out dialogue between Israel and Egypt continues. Common interests maintain the bond between the military and the intelligence agencies of both countries. All that President Mohammed Morsi can do is “plug his nose” and talk with Israel. He has no choice, because he thinks it’s the right thing to do, and also because the Americans expect it of him. The way to American aid passes through Jerusalem too, and it works. According to this approach, the map of the Middle East is coming apart and the Americans are regrouping in the face of the events in Syria and Iran. Taken together, all of this creates an interesting new mapping out of interests, in which Turkey could derive considerable benefit from normalizing its relationship with Israel.

The first approach dominated throughout Netanyahu’s previous term. Israel stood firm in its insistence that it would not apologize or compensate the families of people killed on the Marmara. Things changed during Netanyahu’s second term. Ya’alon was appointed minister of defense, and discovered that “things that can be seen from here can’t be seen from there.” Once Obama threw all his weight behind the issue, Netanyahu picked up the phone and called Erdogan to apologize.

All that is left now is to find out who was ultimately right. The contacts established this week in Ankara will provide the answer. So far, the skies are overcast. The Turks are bringing a whole flock of goats into the room. They are demanding astronomical levels of compensation, both for themselves and the families of the victims, and they have vociferously denied numerous speculative reports in the media, including one claiming that they are supposed to allow Israel to station fighter jets in bases on Turkish territory in preparation for an assault on Iran.

Even the body language of Erdogan and other senior Turkish officials continues to be negative at best and hostile at worst, when it comes to anything relating to Israel. The real question is: What’s actually happening in chambers? Erdogan will continue attacking Israel on every occasion he gets. It is quite obvious that it is good for his ratings.

The question is whether he will realize that the current situation in the region requires a certain degree of Turkish-Israeli collaboration under an all-inclusive American umbrella, in order to cope with the difficult challenges nearby: the crisis in Syria, which could lead to that country’s partition or collapse, the Iran crisis, the situation in Egypt, the Arab Spring, etc. Israel has quite a bit to offer Turkey. The question is whether Turkey is interested in it.

What it all boils down to is that contacts between Israel and Turkey are much more important for the future of the region than the sum of their components. They are greater than any bilateral relationship between the two countries. They could prove that an Islamic state could have a real relationship with a Jewish state. They could establish the next important strategic axis. They could more or less balance and rein in the independent radicals, who threaten to set the whole region on fire. The decision as to what to do next is sitting on Erdogan’s desk. The man who changed the face of Turkey must now decide where he goes from here.