The revelation that the head of Turkish Intelligence may have blown the cover of Israeli agents has deepened the crisis in US-Turkey relations. 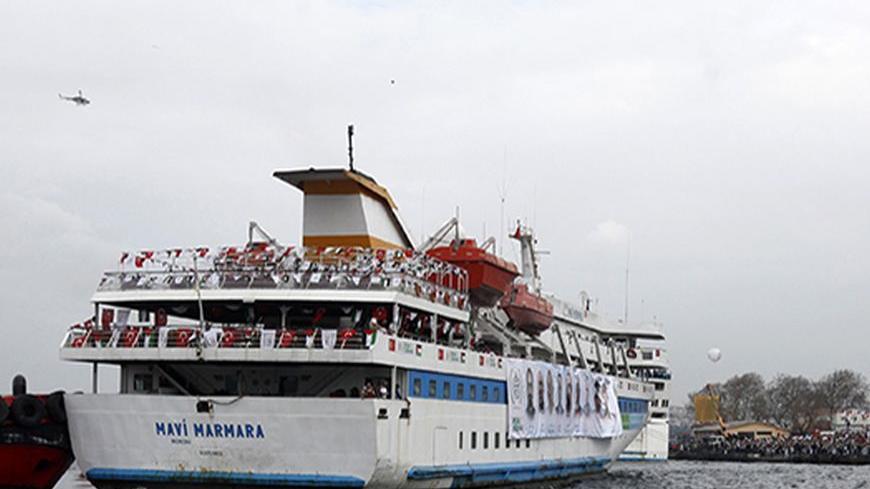 The cruise liner Mavi Marmara, the vessel on which nine Turkish activists died when Israeli commandos raided the boat, arrives at the port of Istanbul, Dec. 26, 2010. - REUTERS/Osman Orsal

Hakan Fidan, Turkey’s intelligence chief, epitomizes the deep strategic change in the relationships between Israel and Turkey and the latter’s about-face in its Middle Eastern policy.

The Oct. 16 report in The Washington Post that Turkish intelligence blew the cover on an Israeli spy ring in Iran and exposed it to the local authorities is just the tip of a big, evil iceberg that looms over Israel and Turkey’s defense establishments. For dozens of years, Israel and Turkey, like close allies, cooperated in all areas of intelligence and security. Intelligence cooperation was close-knit and accurate. There was great trust between the parties, which yielded many mutually beneficial fruits. No more. The conciliation between Israel and Turkey, which was brokered by US President Barack Obama after immense efforts, is merely a veneer. In essence, there is no change.

High-ranking Israeli security officials contend that the 45-year-old Hakan Fidan, who used to serve as special assistant to Turkish Prime Minister Recep Tayyip Erdogan, is a radical Islamist who maintains very close ties with Iran. His appointment as chief of intelligence was a watershed that marked Erdogan and his party’s full seizure of the country’s defense establishment. At first, Israel was unaware of this appointment. It was only in the wake of the Mavi Marmara flotilla events in 2010 that its intelligence services became aware of the fact that Fidan was heading Turkey’s intelligence services. Until that point, the working assumption in Israel was that Turkey’s intelligence and military remained independent and that a certain degree of cooperation could be maintained, even when Ankara was being hostile or standoffish.

That’s precisely what happened after the Muslim Brotherhood rose to power in Egypt, where the formula actually worked. Egypt’s intelligence agencies continued to cooperate with their Israeli counterparts, and with greater force yet following the tacit agreement of the now-ousted Egyptian President Mohammed Morsi and his associates in Cairo.

In Ankara, it turns out, things are done completely differently. Erdogan enhanced his grip on power, carrying out a massive purge of the military by sending dozens of generals to prison and not hesitating to appoint a close Islamist associate as chief of intelligence. According to Israeli sources, the Mavi Marmara flotilla events unearthed the deep schism. Almost instantaneously, Israel realized that it had lost Turkey. Things will never be the same again.

It is hard to believe that it was just a few years ago that Israeli and Turkish generals could have held intimate tête-à-tête consultations and even gossiped about their leaders. One of Israel’s former air force commanders received a perk from his Turkish counterpart by getting a “peek flight” along the Turkish-Iranian border. Another retired Israeli general told me last week about his productive working visits to Istanbul and Ankara, after which he would be hosted by his Turkish counterpart. The latter would take him sailing on a luxury yacht on the Bosporus. He would whisper a secret or two in his ear, perhaps even gossip about Turkey’s senior leadership and the independence of the Turkish military as the “guardian of democracy and the constitution” in accordance with the spirit of Mustafa Kemal Ataturk, deemed the founding father of the modern Turkish nation.

Since then, Turkish Kemalism has been waning and has been on the defensive. Erdogan and his Justice and Development Party’s (AKP) grip on Ankara is tighter than it has ever been. The Turkish prime minister has engendered impressive economic growth, improving the quality of life for the masses. He has also learned the lesson from his predecessors who were vanquished under the boots of the military. Now he — and nobody else — is in control. The generals are either in prison or have gone underground or been tamed and put in their proper place.

Having received the message loud and clear, Israel improved its relations with Greece and Cyprus, preparing other alternatives, despite the fact that in quite a few areas Turkey remains irreplaceable. It shares a long border with Syria, Iraq and Iran. This is a strategic asset of the first order. It also has efficient intelligence services, a huge army and large air and naval forces. Israel was a major supplier of technology, military materiel, weaponry and much more. It upgraded Turkish tanks and other weaponry systems. Most of these collaborations are long gone. What we have is a huge pool of bad blood.

The reported event where an Israeli spy ring operating in Iran was exposed to Iranian authorities probably did take place. Official Israel, notwithstanding, maintains a roaring silence.

Either way, this marks a serious intelligence setback for Israel and the West’s efforts to gather information from deep inside Iran’s nuclear project. According to Western intelligence sources, Fidan and Tehran make a perfect match. Some of them even joke that “Fidan has long been on Iran’s payroll. He is the Iranians’ long-term investment, which now bears many fruits.”

Despite all this, if the report is correct, blowing the cover on an active spy ring and exposing it to Iran, cold-bloodedly, is considered in Israel to be a scathing transgression of a red line. Even the Americans, who were aware of the incident, viewed this as a severe violation of international codes between friendly nations.

Ankara emphatically denies the incident via various spokespersons (chief among them Foreign Minister Ahmet Davutoglu.) So who leaked this story precisely at this time? There’s no telling, but we can surmise: It’s either Israel or the United States.

It is against this backdrop that the Israelis who were opposed to conciliation with Turkey find it hard to conceal their broad smirk. Israeli Defense Minister Moshe (Bogie) Ya’alon was one of the opponents to conciliation in his previous capacity. Now, as defense minister, he is all for it. The only one who remains consistent in his objection is former Foreign Minister Avigdor Liberman.

“Turkey has proven,” Liberman says in closed forums, “that it had no intention of reaching conciliation. The Turks don’t want conciliation. All they want is to bring Israel down to its knees. They cooperate fully with the Iranians and have an Islamic agenda. We simply played into their hands. We paid dearly and got nothing in return.”