Is Turkish-Israeli normalization on track?

All signs point to the beginning of a thaw in Israeli-Turkish relations. 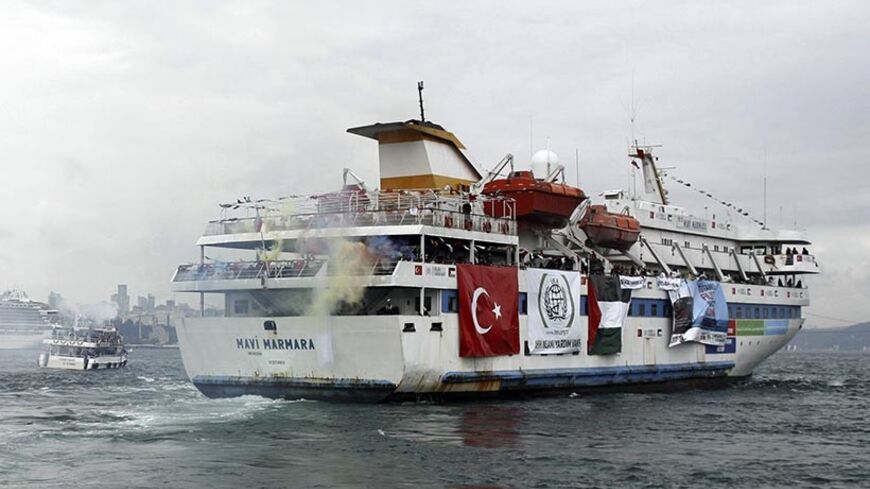 According to a statement by a senior Israeli official to Turkey’s Jewish community newspaper Salom, after Prime Minister Benjamin Netanyahu returns from Japan on Friday, the agreement with Turkey will be signed and relations between the two countries will return to normal as soon as possible.

As Salom reported, when Netanyahu signs the agreement, the four-year deadlock between the two countries, which began with the Israeli attack in May 2010 on the Mavi Marmara ferryboat trying to break the blockade of Gaza, will end. Turkey’s Foreign Minister Ahmet Davutoglu said last week that questions between the two countries have mostly been resolved.

In a news conference, Davutoglu said, “Officials are continuing their discussions. I want to emphasize that positive developments have been achieved.” According to the agreement, Israel will pay $21 million to the families of Turkish nationals killed in the attack. The money will be first deposited with a charity organization and then distributed to the families. Turkey will then make the necessary legal arrangements to terminate the court cases brought against Israeli soldiers. After signing the agreement, the ambassadors of both countries are expected to return to their posts.

While official contacts continue to determine what kind of road map Turkey and Israel, once close allies, will follow in coming days, academic circles and civil society organizations try to contribute to these contacts. On May 8-9, there was a series of round table meetings of Turkish and Israeli diplomats, academics and journalists organized by the Center for Global Political Trends (GPOT) of Istanbul's Kultur University and by the Israeli think tank Regional Policies Institute (MITVIM). The main theme was ''The Status of Turkey-Israel Relations From a Regional Perspective," to discuss what steps can be taken to repair the relations.

In the aftermath of the Mavi Marmara flotilla affair, Turkey imposed three conditions to normalize relations with Israel. The first was an Israeli apology. When in March 2013 Israeli Prime Minister Benjamin Netanyahu, in the presence of US President Barack Obama, apologized to Erdogan over the phone, the first condition was fulfilled. The second condition was payment of compensation to the families of those killed on the Mavi Marmara. News of an accord on this issue was confirmed by official sources as well. The third remaining condition was the lifting of the Israeli blockade on Gaza. But as Erdogan revealed on April 30, the two countries had agreed on easing the blockade, instead of lifting it totally, and to provide humanitarian assistance to Gaza with a special status to be granted to Turkey. The countries are said to have agreed in principle and were now discussing the details.

While these developments enhanced expectations that a solution was near, the gray areas of the agreement were discussed in detail at GPOT/MIVTIM meetings. If an accord is signed to normalize relations, then the families of those who lost their lives and Turkey’s Humanitarian Relief Foundation, which had organized the flotilla, will be asked to withdraw their cases against Israeli soldiers in Turkish and international courts. The problem here is how to put into the accord that restriction on the right of individuals to complain to international courts, and possible domestic reactions to having the parliament approve such a text.

As Salom newspaper noted, although a signature might reactivate the diplomatic relations between the two countries by returning their ambassadors, a true normalization of relations may take longer. That there was a serious issue of confidence between the two countries was recognized and possible remedies and mutual expectations were discussed at length in the meetings. There were suggestions that leaders could undertake gesture visits to generate positive public opinion.

Although Turkey and Israel have mutual interests when it comes to regional security, their approaches to Egypt, Iran and Palestine are radically different. How the Israel-Palestine question will evolve now that their peace process is clogged and how that will affect Turkey-Israel relations is especially hard to predict. This is important because the Israel-Palestine question also occupies an important place in Turkey’s domestic politics. The Fatah-Hamas reconciliation points to the possibility of changes in Palestine. This in turn makes Israel question whether Turkey could play a constructive role with Hamas. But given Turkey’s unsuccessful mediation efforts in the past, it was doubtful whether Ankara would initiate a new effort.

On the other hand, unfortunately, the search for stability in the region has superseded the search for democracy with the utter failure of democracy expectations after the Arab Spring, except in Tunisia. Israel is seriously worried with Syria’s export of terror and refugee questions and Iran’s increasing effectiveness in the region.

For Israel, Turkey with its Muslim identity, and its secular and democratic governance, should be one of its most appropriate allies in the region. The performance of Erdogan on Charlie Rose’s PBS program should be analyzed carefully. When asked about normalization in that interview, Erdogan’s reconciliation message was clear. As Arad Nir noted, when talking of normalization with Israel, Erdogan’s body language and style reflected goodwill and serenity. That was the first time Erdogan didn’t demand Israel lift the blockade of Gaza, unlike other times when he never missed an opportunity to say so. Erdogan this time spoke of “discussing taking humanitarian assistance to Gaza.”

Despite all the ups and downs, the most important element of Turkey-Israel relations that survived was the economy. Although relations hit bottom in 2009-2010, bilateral volume of trade has expanded. Strengthening economic cooperation could well be the best instrument to re-establish confidence in both countries. If investments can be realized to transport Israeli natural gas to Europe via Turkey, that will surely have a win-win effect in bilateral relations.

Europe, which meets 30% of its natural gas needs from Russia, is concerned about diversifying its sources after the Ukraine crisis. Whether the natural gas to be produced in the eastern Mediterranean will be liquefied in LNG facilities to be set up in south Cyprus, or whether it will be marketed through Turkey via an undersea pipeline, depends on the costs, as Selin Nasi wrote.

Although the Turkey option is more attractive, it won’t be possible to achieve cooperation in energy before Israel-Turkey relations are settled. Since some of the natural gas sources are in territorial waters of south Cyprus, a political settlement to Cyprus issue is essential. That is why after first easing Israel-Turkey relations, the United States and the EU are expected to provide support for a solution of the Cyprus issue.

In sum, with all these developments it is likely that the questions between Israel and Turkey will be resolved. It is almost certain that Erdogan will win the August 2014 elections. All Justice and Development Party senior officials say Erdogan wants normalization with Israel in his tenure as president 2014-2019.