Is Turkish-Israeli reconciliation back on track?

The shifting regional picture may be forcing Israel and Turkey to rebuild ties, but only after Turkey’s elections on March 30. 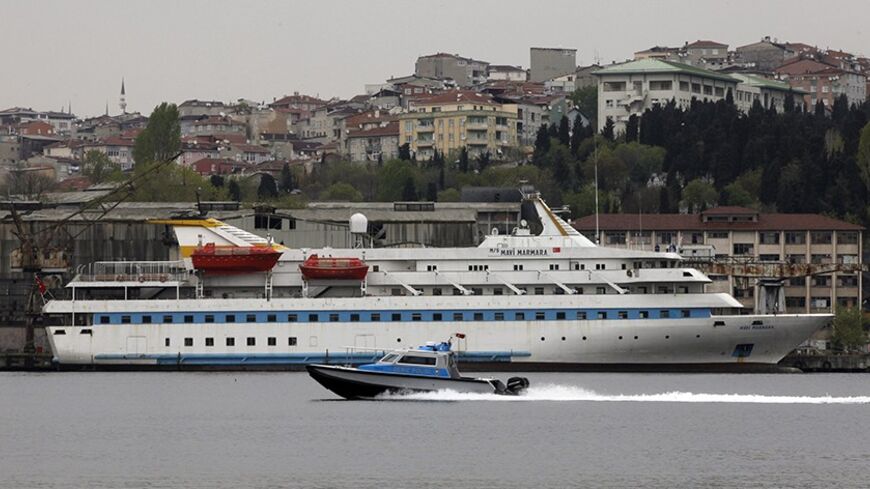 The Turkish-owned cruise liner Mavi Marmara is seen under maintenance at a shipyard in Istanbul, April 21, 2013. - REUTERS/Murad Sezer

Following a lull of several weeks, the Turkish-Israeli reconciliation story is back in the news following some new developments and high-level statements. Some suggest that events in Syria in particular and the Middle East in general are acting as a catalyst for the process.

It is seems prudent, however, to keep a pinch of salt around, as this story has seen more than one false start since Israeli Prime Minister Benjamin Netanyahu’s surprise apology last year for the 2010 raid by Israel commandos on the Turkish aid ship Mavi Marmara as it headed for Gaza. Nine Turks were killed in the raid, sending Turkish-Israeli ties into a nosedive from which they have not yet recovered.

Citing unidentified officials, the Turkish and Israeli press reported in February that the two countries were close to signing a compensation deal for those killed, a step that would be a precursor to normalizing diplomatic ties.

Turkish Prime Minister Recep Tayyip Erdogan, however, put a damper on these reports when he came out demanding that Israel lift the siege on Gaza before ties with Israel revert to what they once were, a demand that Turkish diplomats acknowledged privately was unlikely to be met.

Turkish and Israeli press reports are now saying that Erdogan’s demand may have been a response to Netanyahu’s reluctance to sign the compensation deal before the March 30 municipal elections in Turkey.

Since last summer’s anti-government riots, Erdogan has claimed that there is an international conspiracy against Turkey. He has made it clear that he understands this to be also Jewish-driven and egged on by Israel. He has been repeating this claim as he fights off serious corruption charges in the lead-up to the municipal elections.

The speculation among diplomats is that Netanyahu probably wanted to wait until after these elections before committing to an agreement with Turkey, concerned that the anti-Israeli language Erdogan uses for populist reasons might leave him dealing with serious criticism in Israel.

Diplomats say Erdogan, a staunch supporter of Hamas, has also been dragging his feet on normalizing ties with Israel before the municipal elections, since that issue is bound to be highly controversial for his Islamic grassroots supporters.

Whatever the truth, such speculation shows the highly delicate political environment in both Turkey and Israel that the diplomats are working in, trying to lay the groundwork for the normalization of ties.

Remarks on the topic by Turkish Deputy Prime Minister Bulent Arinc earlier this week also indicate that the March 30 elections have something to do with the delay in normalizing ties. Arinc was quoted by the Turkish media on March 25 as confirming that a compensation deal for the Mavi Marmara victims had been arrived at in February during official talks in Israel.

“But as you can see, both sides are busy. The first task after the elections will be to complete the compensation issue as a legal document. After that, the document will be sent to parliament for approval,” he said.

In a follow-up to Arinc’s remarks, Turkish Foreign Minister Ahmet Davutoglu told Agence France-Press on March 27 that the gap between Turkey’s and Israel’s expectations was closing. "Progress has been made to a great extent, but the two sides need to meet again for a final agreement," he said, referring to “a positive momentum and a process in a positive direction."

The Turkish press also reported this week that David Meidan — said to be Netanyahu’s special envoy responsible for energy and security and a former deputy Mossad head — arrived in Ankara on March 24 for a one-day visit during which he secretly met with Hakan Fidan, the head of Turkey’s intelligence agency, and other Turkish government officials.

The topics of discussion during these meetings reportedly included upgrading diplomatic ties, a visit by Erdogan to Israel within a month after the municipal elections, mutual energy and security issues and developments in Syria.

There has been no confirmation from either the Israeli or the Turkish side concerning these reports — which, tellingly, have not been denied, either.

Be that as it may, it seems highly unlikely that Erdogan will visit Israel so soon, if indeed at all, unless there is a significant “Gaza angle.” Erdogan promised Hamas leaders last year that he would visit Gaza.

It was expected at the time, before Egypt’s former President Mohammed Morsi was toppled, that this would take place over the Rafah crossing connecting the Palestinian enclave and Egypt. That crossing, however, was closed after last summer’s coup in Egypt.

Given the current animosity between Ankara and Cairo, the only way Erdogan can enter Gaza today is through Israel. Israeli Defense Minister Moshe Ya’alon gave his approval for 570 trucks to enter Gaza with building materials for a Turkish hospital, fueling speculation about a potential visit by Erdogan to Israel.

But this approval is more likely related to Erdogan’s demand for a lifting of the Gaza blockade than a visit to Israel. A much-needed Turkish hospital in Gaza will clearly provide a face-saving formula for Erdogan as he backtracks on his demand for the Gaza blockade to be ended for ties between the two countries to resume.

In more general terms, another interesting question circulating among diplomats in Ankara these says is whether Syria is also pushing Turkey and Israel toward normalizing relations. According to one argument, the two countries have a growing need to revive the cooperation against terrorism they once enjoyed, especially considering the increasing turmoil in Syria, where Jihadist groups such as the Islamic State of Iraq and al-Sham are making headway.

There are also suggestions that Ankara’s political isolation in the Middle East, where Erdogan’s policies have alienated most of the region’s governments, is forcing Turkish policy planners to seek a return to the status quo with Israel that existed prior to Jan. 29, 2009. That was the date when Erdogan lambasted Israeli President Shimon Peres at the World Economic Forum in Davos, accusing Israel of killing innocent Palestinians during its military operation in Gaza. It was also the start of a series of incidents that resulted in ties eventually hitting rock bottom with the Mavi Marmara raid in May 2010.

Cooperation in the energy field is yet another development fueling suggestions that Turkey and Israel are seeking to normalize ties. Israel’s Globes business daily reported March 23 that more than 10 bids have been submitted in a tender by the partners in Israel’s Leviathan gas field for the export of natural gas to Turkey. The article reported several dozen Turkish companies had been invited to bid on a deal that would include the laying of a pipeline to Turkey.

It seems that the regional realities that have tamed Ankara’s once-ambitious plans for the Middle East and the need for cooperation against growing common threats, as well as Turkey’s need for energy and Israel’s need to secure safe outlets for its vast gas reserves, are forcing Erdogan and Netanyahu to act according to the dictates of realpolitik, despite the dislike they undoubtedly continue to feel for each other.