Turkey-Israel ties may be linked to gas pipeline 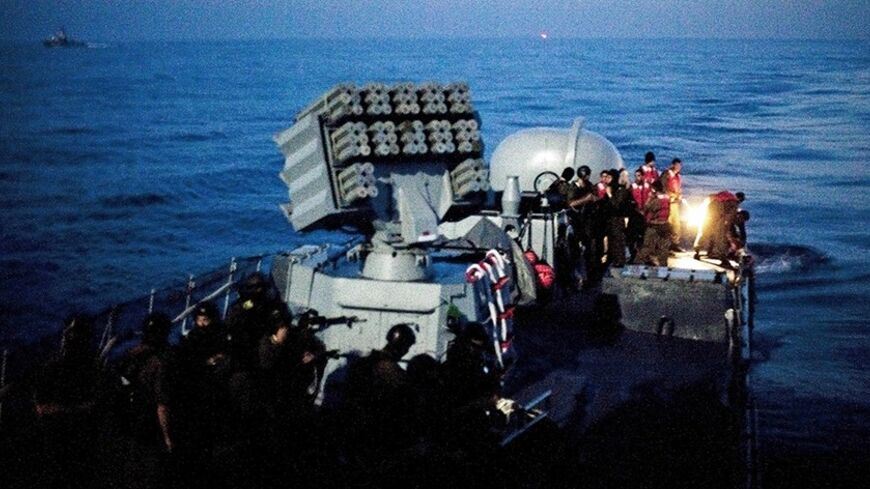 Israeli soldiers ride aboard a naval vessel in the Mediterranean Sea, May 31, 2010. - REUTERS/Uriel Sinai

Following months of bargaining over compensation for pro-Palestinian Turkish activists killed by Israeli commandos on the Mavi Marmara on May 31, 2010, Turkey and Israel appear close to a deal that could pave the way to normalized relations in the near future. This development comes almost a year after Israeli Prime Minister Benjamin Netanyahu, under pressure from President Barack Obama, apologized to Turkey over the Mavi Marmara raid.

Ankara accepted the apology, but then appeared to be in no a rush to normalize relations, leaving US and Israel officials wondering whether Prime Minister Recep Tayyip Erdogan was sincere about re-establishing ties with the Jewish state. Developments in the Middle East, however, especially in Syria, which is going haywire for Turkey, are clearly weighing on Ankara and forcing its hand.

Deputy Prime Minister Bulent Arinc, who's coordinating the compensation talks with Israel, has said that he “feels a settlement is close.” Arinc, answering reporters’ questions in Ankara Feb. 3, reiterated, however, that one of Turkey’s demands is that Israel lift its siege on Gaza. He said that while Israel was permitting certain goods and medicines into the Palestinian enclave, it had not fully lifted the blockade. “We are not at the [place] where we can put down our signature yet,” Arinc asserted. He also said that both the United States and Israel were keen on an agreement. Diplomatic sources have told Al-Monitor that if a compensation deal is agreed on, Ankara will likely soften its demand regarding Gaza.

Meanwhile, in another sign that Ankara is looking to rebuild bridges, not just with Israel but also with the Jewish Diaspora, the Erdogan government authorized the Foreign Ministry to send a high-level representative to this year’s Holocaust commemorations, held Jan. 27 in Istanbul. The Foreign Ministry said in a Jan. 26 statement that Deputy Foreign Minister Naci Koru would represent Turkey at the event, which was jointly organized by Istanbul’s Jewish community and Kadir Has University. The statement added that the commemoration aims “to raise consciousness, particularly among the young generation, about the Holocaust and the crimes against humanity by reminding the public of the importance of this issue.”

After a six-month lull because of differences, the compensation talks resumed in December, when an Israeli delegation was invited to Turkey for talks. That meeting is now being followed up by the arrival of a Turkish delegation of senior diplomats and legal experts in Israel a few days ago.

Government sources informed Al-Monitor that instead of agreeing to an arrangement for direct compensation for the families of the Turks killed, the two countries would sign an agreement under international law. It would then be subject to parliamentary approval, following which payment would be made to Turkey, which would in turn pay the families of the deceased. The same sources indicated that such an agreement would result in the dropping of cases filed in Turkey against senior Israeli government and military officials in office at the time of the Mavi Marmara raid.

According to Israeli media reports citing official sources, the sides are said to have all but agreed on a figure of $20 million in compensation after Turkey lowered its demand of $30 million, and Israel raised its offer of $15 million. Meanwhile in Turkey, the English-language Hurriyet Daily News quoted a diplomatic source as saying, “There are positive developments with regard to fixing the compensation issue. An agreement is almost ready and is waiting for the finalization of some minor issues before being submitted to the two countries’ leadership.” The sides are currently concentrating on the “small print,” a diplomatic source informed Al-Monitor, reiterating that the Erdogan government intends to seek parliamentary approval for the deal. The source said Erdogan does not want any hitches in parliament over the wording of the agreement.

Although the ruling Justice and Development Party (AKP) has enough parliamentary seats to ratify a deal, the issue remains emotionally charged, not only because it involves the death of nine Turkish citizens, but also because of the widespread sympathy for the Palestinian cause in Turkey. In addition to possible parliamentary opposition, Erdogan, beleaguered by a domestic corruption scandal, must consider the sensitivities of his grass roots Islamist supporters in the lead up to crucial local elections at the end of March. He also wants to avoid grumbling within AKP over any deal reached. Speculation in Ankara indicates that full normalization of ties with Israel will most likely be left until after local elections, even if a compensation deal is concluded before then.

While Erdogan appears to be maintaining his hard-line positions not only on Israel, but also on Syria and Egypt, diplomats argue that this is really for domestic consumption at this stage. They contend that his government is trying to reestablish the influence in the region that Turkey lost after the Arab Spring due to a series of miscalculations. Diplomats also note, however, that things have not gone so well for Israel either, pointing out that it currently faces more isolation in the region than at any time in the past. This is thought to be putting pressure on Netanyahu to normalize relations with Ankara.

The recent warning by US Secretary of State John Kerry that Israel could face international boycotts if the peace talks with the Palestinians fail of course prompted an angry and defiant response from Israel. Commentary in the Israeli media, however, suggests that the country would indeed suffer if faced with further boycotts, especially from Europe.

It's noteworthy in this regard that trade between Turkey and Israel has never stopped, and has even registered annual increases, despite diplomatic relations hitting rock bottom following the Mavi Marmara incident. According to the Turkish Foreign Ministry, bilateral trade between the two countries, which stood at $ 3.4 billion in 2008, rose to $4.4 billion in 2011 and exceeded $4 billion in 2012.

Meanwhile, energy officials and pundits are increasingly talking about a natural gas pipeline between Turkey and Israel that would not only meet Turkey's needs, but would also provide Israel with a viable option for transporting the vast quantities of natural gas (far in excess of its own needs) that it discovered off its coast to world markets.

In an article for Bloomberg, Matthew Bryza, a former US ambassador to Azerbaijan who's not on the board of Turcas Energy Group AS, which is backing an Israel-Turkey gas pipeline, asserted: “Turkish officials have indicated that the restoration of relations with Israel could occur in tandem with an agreement to build an Israel-Turkey natural gas pipeline.”

In a further sign that Turkey and Israel are inching their way toward normalized ties, the two countries arrived at an agreement in December that allows the Israeli national carrier El Al to resume flights to Turkey after a gap of more than five years. El Al halted flights after Turkey refused to comply with Israeli security demands at Turkish airports. The Israel carrier is expected to resume flights this summer, leading Turkish tour operators to hope that this will increase the number of Israelis visiting Turkey, especially if normalization is secured. The number of Israeli tourists dropped from 514,000 in 2008 to around 80,000 in 2011 after the Mavi Marmara incident.

While prospects for the normalization of diplomatic and political ties look much better than before, this is, after all, the Middle East.

The Syrian crisis has spawned common threats, especially from jihadist groups, to Turkey and Israel, increasing their need for cooperation. Most diplomats agree that the two countries can contribute more to peace and stability in the Middle East by cooperating rather than by fighting. This is why they anticipate an early normalization of Turkish-Israeli relations.