Did Erdogan give up Gaza in return for Israeli gas?

Erdogan’s ambition for a presidential system keeps him from dropping the Gaza precondition for the settlement of sour relations with Israel, but this does not stop the two sides from cooperating on natural gas. 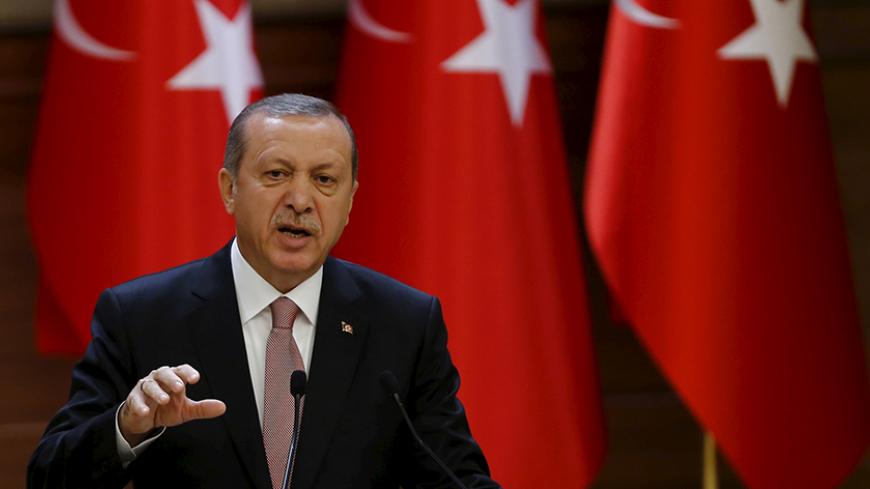 Days before Israeli media broke the news of a preliminary Turkish-Israeli deal to normalize ties, Turkish President Recep Tayyip Erdogan had thrown a signal flare of impending moves to settle the Mavi Marmara crisis between the two countries.

Speaking to journalists on a flight back from Turkmenistan on Dec. 13, Erdogan broke with his usual hostile rhetoric against Israel, saying that “Turkish-Israeli rapprochement is vital for the region” and that normalizing ties would be “to the benefit of the whole region.” He then reiterated his three conditions for reconciliation: first, an Israeli apology for the killing of 10 Turks, including one with US citizenship, in the Israeli raid on the Mavi Marmara ferry on May 31, 2010, as it sailed in international waters in the Mediterranean with 590 activists aboard, mostly Turks, seeking to break the naval blockade of the Gaza Strip; second, the payment of compensation to the families of the victims; and third, the lifting of Israel’s naval blockade on Gaza.

Four days later, the Israeli daily Haaretz reported, “Israel and Turkey have reached understanding on the outlines of a reconciliation agreement that would put an end to the long crisis in relations between the two countries and normalize ties.”

The senior Israeli official Haaretz listed the key points of the framework agreement: First, Israel will pay $20 million in compensation to the families of the Mavi Marmara victims. Second, the two sides will “normalize” ties and mutually appoint ambassadors. Third, the Turkish parliament will pass a law to annul all legal claims against members of the Israeli military in connection with the Mavi Marmara raid. Fourth, Turkey will limit Hamas activities on its soil and expel Saleh al-Aruri, a senior member of Hamas' military wing, allegedly based in Istanbul. And finally, once the final agreement has been signed, the two countries will discuss cooperation on Turkish imports of natural gas from Israel and a pipeline to carry Israeli gas to Europe via Turkey.

Comparing Erdogan’s remarks and the framework the Israeli official outlined to Haaretz, one sees the overlapping elements are actually points that have already been agreed to in previous years, i.e., the payment of compensation, the adoption of the said law and the restoration of diplomatic ties at the highest level. The new element here is Israel’s acceptance to raise the compensation sum to $20 million.

Yet, the two sides’ frameworks contain some critical differences that keep them from structuring a “joint framework” for now. For instance, Erdogan’s apology precondition is missing from the Israeli framework. Israel probably believes this was already done with the telephone call Israeli Prime Minister Benjamin Netanyahu made to Erdogan in March 2013 — in the presence of US President Barack Obama — where he offered an apology “for any [operational] mistakes that may have led to the loss of life” on Mavi Marmara. Erdogan accepted the apology during the call and has said nothing since to suggest he didn’t. Why he still demands an apology begs explanation.

Then, the issue of curbing Hamas activities in Turkey, including Aruri’s expulsion, cited in the Haaretz report is absent from the Turkish side’s “agreement framework.” According to a senior Turkish official, quoted by the Hurriyet Daily News on Dec. 17, the issue of Hamas could be discussed as a separate security matter if need be.

The most important issue the Turkish framework contains and the Israeli one omits is the Israeli naval blockade on Gaza. Erdogan insists on the lifting of the blockade as a precondition. By doing so, he effectively keeps linking the settlement of the Mavi Marmara crisis to a settlement of Israel’s security problem with Hamas, which could take many years. Hence, this expectation is unrealistic and has served only to keep Turkish-Israeli political ties in a state of crisis.

Gaza and Israel watchers would agree that for Israel, the importance of restoring ties with Turkey can never be as urgent and critical as the direct security threat stemming from its conflict with Hamas. Only the termination of this threat, in other words, the solution of the Gaza problem, could encourage Israel to end the blockade. Thus, the blockade will not be lifted because Turkey so wants, and no one should doubt that Ankara is perfectly aware of this.

For Ankara, however, the pre-condition is instrumental in keeping its political ties with Israel in a formal state of crisis, provided that the crisis is manageable and serves the Justice and Development Party’s (AKP) domestic and foreign policy agenda. And the crisis did serve the AKP’s Hamas-focused, Islamist domestic and foreign policies for a certain period of time. During this period, Gaza was turned almost into a “national cause,” while hostility to Israel and even plain anti-Semitism became the hallmarks of Turkey’s new political culture, courtesy of the government’s spokesmen and media.

Then came the July 3, 2013, military coup in Egypt, which largely eliminated the ground for Ankara’s Hamas-focused policies. Ankara, for its part, channeled most of its attention and energy to toppling the Syrian regime, and thus the need to perpetuate the crisis with Israel waned.

More recently, the crisis with Russia, which supplies more than 50% of Turkey’s natural gas imports, reminded Ankara of the importance of diversifying energy sources, which, in turn, increased the importance of mending fences with Israel, a gas exporter-to-be in the near future. There is a near consensus that a pipeline running through Cypriot territorial waters to Turkey is the most viable route for Israeli gas exports to Europe. Then, the question pops up: Is the normalization of bilateral ties a precondition for Israeli gas exports via Turkey?

The answer depends on what one understands from “normalization.” If it is taken to mean relations based on mutual trust, with economic ties and political dialogue institutionalized, coupled with strategic cooperation against terrorism and extremism and the revival of military cooperation, then one might have to wait for a new world to be born to see Turkish-Israeli ties normalize.

But Israel and Turkey don’t really need to normalize ties in order to cooperate on natural gas. “Don’t they need to settle the Mavi Marmara crisis at least?” you may ask. No, not even that. It will be enough for them to agree on creating an air of rapprochement to show their publics they have good will to resolve the crisis, without actually resolving it. Just like AKP spokesman Omer Celik did Dec. 20, for instance. Speaking in a conciliatory tone, Celik said no final agreement had been reached before adding, “The Israeli state and people are Turkey’s friends. Our criticism up to now has been directed at the Israeli government’s excessive behaviors, which we deem to be illegitimate.” Yet, this tone should not be limited to individuals but become a well-established political rhetoric.

The Mavi Marmara crisis may actually not stop Turkey and Israel from starting joint investment in the natural gas field, just as it has not stopped the increase in economic ties since 2010. The bilateral trade volume, which stood at $3.44 billion in 2010, hit $5.83 billion in 2014.

For Erdogan, the lifting of the Gaza blockade seems to be a precondition he needs to maintain for some more time because of the domestic agenda he has in mind — a transition to a presidential system, which will require elections or a referendum on a constitutional amendment at a certain point. Up until then, he would not like to appear as a leader who has sold Gaza out for Israeli gas, cornered by the crisis with Russia.