For now, both Turkey and Israel may prefer the status quo. 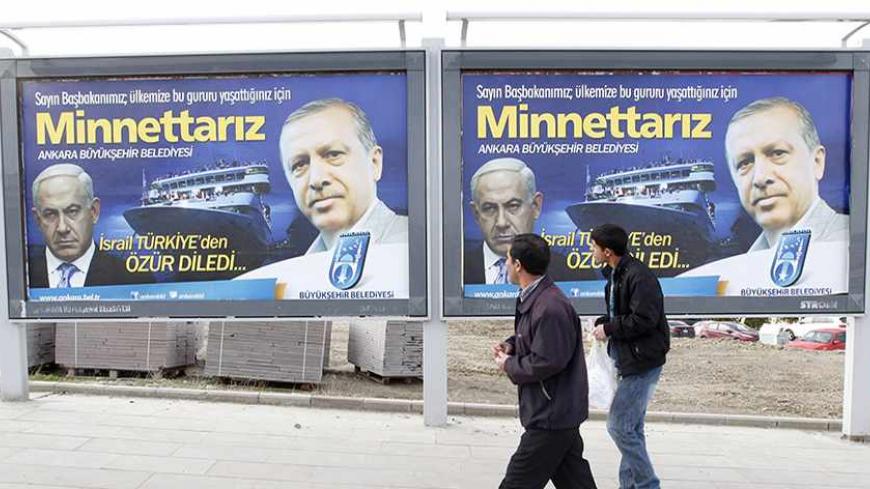 Nine months have elapsed since Israeli Prime Minister Benjamin Netanyahu swallowed his pride and called Turkish Prime Minister Recep Tayyip Erdogan, under pressure from US President Barack Obama, to apologize for the Mavi Marmara raid in 2010, hoping this would help normalize ties with Turkey. That is yet to happen, however. Ankara’s resetting of its policies in the Middle East, in an attempt to regain lost influence in the region, does not appear to cover Israel yet.

Netanyahu’s apology, which had caught Ankara off guard, was considered a major concession for a politician known to be no less abrasive and stubborn than Erdogan. Relying on this breakthrough, diplomats believed Turkey would have to respond in kind, its principal demand over the Mavi Marmara incident having been met.

Turkey had also demanded compensation, which Netanyahu said would be paid. A third demand, which Ankara has been heating up or cooling down according to its needs, is the lifting of the siege on the Gaza Strip.

Many felt Erdogan would use the apology to open a new page with Israel for pragmatic reasons, if nothing else, given the growing need for stability in the Middle East. The statement issued simultaneously by both countries on March 22 following the phone conversation between Erdogan and Netanyahu was also encouraging.

Indicating that Erdogan had emphasized “the importance he attaches to the shared history and centuries old ties of strong friendship and cooperation between the Jewish and Turkish peoples,” it added that “the recent deterioration of the relationship between Turkey and Israel, which he [Erdogan] sees as having vital strategic importance for the peace and stability of the region, is regrettable.”

Despite such grandiose remarks, Turkish-Israeli diplomatic ties remain in the doldrums, ostensibly due to wrangling over compensation to the families of the Turkish activists killed on the Mavi Marmara as well as the continuing Israeli blockade of the Gaza Strip, although this has been eased in some respects.

Nine Turks were killed by Israel commandos in the international waters of the Eastern Mediterranean on May 31, 2010, as the Mavi Marmara aid ship headed to the Gaza Strip to confront the blockade. The incident sent Turkish-Israeli ties into an instant nose dive.

Ties were already tense because Erdogan had stormed out of the World Economic Forum in Davos in January 2009, after telling Israeli President Shimon Peres that his country “knew how to kill well.”

Erdogan was angry over Israel’s military operation in December 2008 against the Gaza Strip, during which scores of Palestinians, including many women and children, were killed. Telling the Israeli president to his face in front of a world audience that his country was an adept killer of innocents also made Erdogan an overnight hero in the Arab world.

That was before the Arab Spring, when Turkey was still looked on with favor in the Middle East and considered a valued ally by most Arab leaders — including Erdogan’s current nemesis Syrian President Bashar al-Assad. Erdogan’s remarks at Davos, however, had not resulted in Turkey’s downgrading its diplomatic ties with Israel. That was to come over a year later, following the raid on the Mavi Marmara.

Erdogan’s anti-Israeli rhetoric also provided him and his Justice and Development Party (AKP) with political capital in Turkey, especially among Islamists. Daniel Wagner and Giorgio Cafiero point to this in a piece they co-authored for the International Policy Digest on Dec. 13.

“Given that the AKP receives significant support from its Islamist voting base, which is anti-Israeli, domestic political pressures are having a significant impact on Ankara's response — particularly given Turkey's pending elections next year,” they wrote.

In fact, Netanyahu’s apology came at a politically inconvenient time for Erdogan, whose personal religion-based ideological antipathy toward Israel does not portend well for rapprochement. Many analysts continue to emphasize, however, that patching up their differences is increasingly important for both countries as the turmoil in the Middle East spreads.

Ankara today faces more than one dilemma as unexpected developments in the region that it has no say or influence over continue apace. The Syrian crisis in particular has gone seriously wrong for Turkey.

In addition to this, Ankara has to now make sense of developments such as the new climate in US-Iranian relations that has angered Israel and Saudi Arabia and, judging by not totally implausible media reports, is pushing them closer against Iran.

Erdogan’s expectations for Egypt have also gone awry in ways he never factored in, especially when he saw the Egyptian military getting praise and support from Arab powers for ousting President Mohammed Morsi and the Muslim Brotherhood.

All this has forced Ankara to try to place its regional policies on a new foundation. Unlike Ankara’s positive overtures with Iran and Iraq as well as the Shiite regions, however, a new approach is still not detectable in Erdogan’s approach to Israel.

With a little over three months left for crucial local elections, to be followed by presidential elections and general elections in 2015, the word in diplomatic circles is that he sees normalization of ties with Israel as a political handicap in terms of his loyal supporters.

Meanwhile, Turkish Foreign Minister Ahmet Davutoglu announced at the end of November, in response to a question in parliament, that Erdogan had not had any contact with Netanyahu whatsoever following the latter’s apology. Erdogan has nevertheless toned down on his anti-Israel rhetoric in recent weeks, especially after he became a subject of international ridicule in August for accusing Israel of masterminding the Egyptian coup.

Some recent remarks by Turkish and Israeli ministers are also being pointed to by some as evidence that there is more going on behind the scenes to improve ties than is apparent. Turkish Deputy Prime Minister Ali Babacan was quoted by the Israeli media on Dec. 15 as expressing hope that Turkish-Israeli relations, which he characterized as “important,” could return to where they were before the Mavi Marmara incident.

Babacan reportedly told Israel Radio on the sidelines of last week’s World Policy Conference in Monaco that Turkey and Israel had “shared interests given the situation in the region and the world.”

Israel’s Environmental Protection Minister Amir Peretz, who was in Istanbul on Dec. 4 for a four-day UN conference on the Mediterranean, also tried to be upbeat about ties. “I believe the problems between Turkey and Israel can be solved very soon,” Peretz, the first Israeli cabinet minister to visit Turkey after the Mavi Marmara incident, was quoted saying in response to reporters' questions.

Such diplomatic niceties do not amount to concrete evidence that any change in dormant Turkish-Israeli political ties is in the offing. It is also questionable how keen Netanyahu is at this stage about this now that he has been left in the lurch by Erdogan. Not everyone in Israel was happy over his apology anyway.

It is perhaps ironic that Turkish-Israeli trade, which appears to follow its own logic, is continuing to increase against this backdrop, having reached $4 billion in 2012, according to official figures. There is also some suggestion that the vast gas reserves found off the coast of Israel could speed up the rapprochement process, since Turkey needs energy and Israel needs a safe and economic route for its gas to Europe.

There are also indications that military cooperation between the two countries are not at a complete standstill and includes exchange of intelligence and cooperation in the defense industry sector.

Pointing to this apparent dichotomy, Wagner and Cafiero argued in their piece on the topic for International Policy Digest that Ankara is aware that Turkey’s long-term interests are best served by continuing to be aligned with NATO and Israel. “No amount of rhetoric will change this, so Erdogan will continue to play both sides of the fence as long as he can,” they said, referring to this as “an open-hand and clenched-fist” approach.

As long as that fist is not aiming at any jaw, this is likely to represent the status quo in Turkish-Israeli ties for the foreseeable future. That probably suits Erdogan and Netanyahu also at the present time.