It remains unclear whether Ankara’s attempts to normalize ties with Israel represents a new orientation in Turkey’s foreign policy. 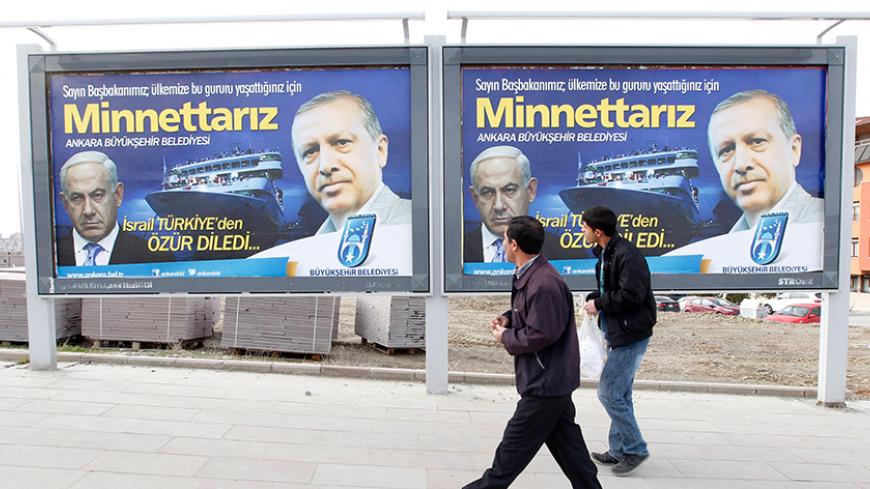 The current effort by Turkey and Israel to mend fences appears to be more a product of necessity than affinity. Both need to break out of their regional isolation.

Tellingly, this development follows Turkey’s crisis with Russia, a situation that has not only further weakened Ankara’s hand in Syria and Iraq, but has also forced Prime Minister Ahmet Davutoglu to seek alternative energy sources to reduce Turkey’s dependence on Russian supplies. Press reports indicate that Turkey and Israel are talking about energy cooperation, given the discovery of vast gas reserves in the Mediterranean that Israel wants to pump to international markets via Turkey.

Israeli media broke the news that senior officials from the two countries had met Dec. 16 in Zurich to thrash out an agreement aimed at normalizing ties. Turkish-Israeli ties took a nosedive in 2010, after Israeli commandoes raided the Turkish aid ship Mavi Marmara as it tried to break the blockade of the Gaza Strip, killing nine pro-Palestinian Turkish activists. Turkey demanded that Israel publicly apologize, pay compensation for the activists' deaths and lift the siege on Gaza.

Under pressure from US President Barack Obama, Prime Minister Benjamin Netanyahu apologized to then-Prime Minister Recep Tayyip Erdogan, in March 2013. Talks on compensation for the Mavi Marmara victims remained inconclusive, however, and Israel gave no indication that it would lift the siege. Ankara at the moment remains cautious, although it appears to be more conciliatory toward Israel.

“A deal has not been signed yet. Work on the preliminary draft is still ongoing,” Omer Celik, spokesman for the ruling Justice and Development Party (AKP), told reporters Dec. 20. “The Israeli state and Israeli people are friends of Turkey. Our criticism is directed at the Israeli government’s extreme behavior, and its behavior that we don’t consider legitimate."

Erdogan, known for his vitriolic anti-Israeli rhetoric, also appears to be acting in a more conciliatory manner, although his latest remarks point to potential difficulties for the current efforts at rapprochement.

“We asked for an apology and got it. We asked for compensation, but this has not happened yet. We also said the embargo against Palestine must be lifted and this too has not happened,” Erdogan told reporters Dec. 13 on his plane returning from a visit to Turkmenistan. “If compensation is given, and the Palestinian embargo is lifted, then we can enter a process of normalization. [Turkey], Israel, Palestine and the region will gain much from this.”

Diplomats are reportedly working on an intermediary formula to meet Turkey’s Gaza demand, which involves an aid corridor for the besieged enclave. For Israel, an outstanding issue is limiting Hamas activities in Turkey and the expulsion of Saleh al-Arouri, a senior Hamas member living in Istanbul and accused of involvement in attacks on Israelis.

Turkish officials say Hamas is not part of the current negotiations. As if to underline this point, Erdogan received Hamas’ political bureau chief, Khaled Meshaal, Dec. 19 in Istanbul. Meshaal also held talks with Davutoglu the day after in Ankara. Some have interpreted Meshaal’s visit from the opposite perspective, arguing that he was in Turkey to be informed about the efforts to normalize Turkish-Israeli ties and to be reassured that this development does not represent a betrayal of Hamas.

If rapprochement with Israel can be achieved, it might have broader significance for Turkey’s general foreign policy orientation. It could signal that Ankara’s populist approach, predicated on Erdogan’s hard-line, Islam-based moralistic and ideological stance, might be replaced with a more realistic reading of international relations.

Ankara’s one-dimensional approach to the crises in Syria, Iraq and Egypt and its mistaken assumptions about the Arab world have reduced Turkey’s clout in the region significantly over the past four years, leaving it generally on the sidelines.

Suha Umar, who served as Turkey’s ambassador to Jordan during 1995-98, said regional developments are forcing Ankara to normalize ties with Israel. He remains skeptical, however, that Erdogan and the AKP’s ruling elite can normalize their general approach to foreign policy given their strong Islamist leanings.

“Turkey lost a lot of ground in the Middle East under this government for two principal reasons. The first was its strained ties with Israel, and second, its support for the Muslim Brotherhood,” Umar told Al-Monitor. “Relations with Israel should have been handled very carefully because of its place in the world and the influence of the Jewish lobby in the US.”

“Making an enemy of Israel gained nothing for Turkey. Meanwhile, the government’s assumptions about the Arab world also proved to be mistaken,” Umar added. “During my time in Jordan, I was often told that Turkey’s ties with Israel were actually an asset for the Arab world. It also became apparent later that Ankara’s sympathies for the Muslim Brotherhood did not leave Turkey in good stead with Arab regimes, contrary to what the government expected."

Retired Turkish ambassador Murat Bilhan differentiated between Erdogan and Davutoglu when asked by Al-Monitor if Turkey’s attempts at rapprochement with Israel represent a move away from an Islam-oriented and “ethics”-based foreign policy toward one based more on realpolitik.

“I don’t see this in Erdogan, but there are signs that Davutoglu is moving in that direction. If you look at what they say closely, there is a fine difference between them in this regard,” said Bilhan, who is currently a vice chair at the Turkish Asian Center for Strategic Studies.

Bilhan added that efforts to normalize Turkish-Israeli ties are the result of a number of overlapping factors forcing the countries to move in that direction. “Both countries feel isolated today. Russia’s involvement in Syria has also upset Israel. There is also the need for energy cooperation. These are all forcing Turkey and Israel to behave more flexibly toward each other,” he concluded.