Turkish-Israeli ties worse than ever 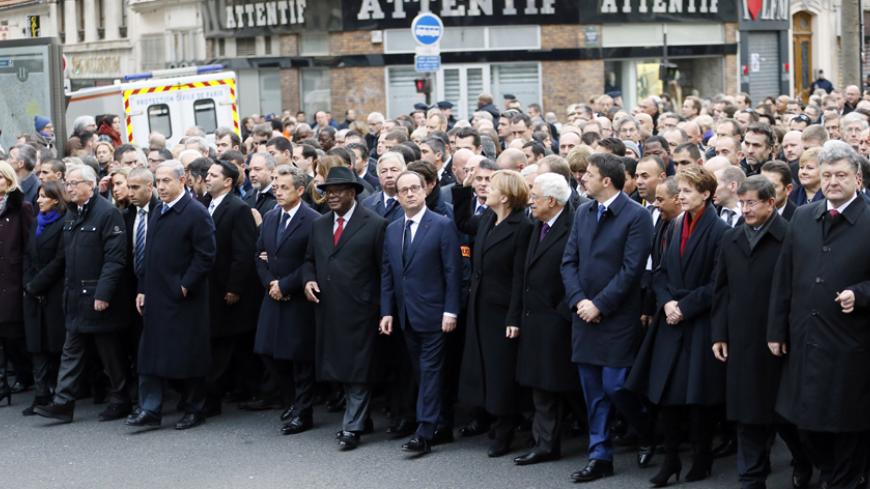 The Paris attacks are having a serious fallout on Turkish-Israeli relations, and neither side is holding back from freely expressing acerbic sentiment about the other.

President Recep Tayyip Erdogan kicked off the latest angry exchange when he questioned how Israeli Prime Minister Benjamin Netanyahu dared to attend the Paris rally Jan.11, which was organized to condemn terrorism as well support freedom of expression.

Erdogan was responding to a question during a news conference in Ankara with Palestinian President Mahmoud Abbas, who had traveled to Turkey for talks immediately after attending the Paris rally himself. “You asked me what I think about seeing Netanyahu. Now I ask you: How do you feel about a person that massacred 2,500 people in Gaza waving his hand there, as if people were expecting him with anticipation? I wonder how he had the gall to go there,” Erdogan said.

Erdogan’s remarks suggest that he was also under the influence of media reports that France initially did not want Netanyahu to come to Paris, but had to invite him after the Israeli leader made it clear he would attend the rally anyway.

While supported by the Islamist and pro-government media, Erdogan failed to win the endorsement of all quarters in Turkey, despite the criticism in secular circles of Israel’s actions against Gaza.

Murat Bilhan, a retired ambassador who lectures at Kultur University in Istanbul and is vice chairman of the Turkish Asian Center for Strategic Studies, feels Erdogan’s remarks were inappropriate. “There is a mixing of apples and pears here. You have the right to oppose Israeli policies in Gaza. But the Paris rally was not the occasion to do this. Four Jewish people were killed and as an elected representative, Netanyahu had to go there. This should be seen as normal if being an elected official is considered sacred,” Bilhan told Al-Monitor, indirectly pointing to Erdogan’s remarks concerning his own status as an elected leader.

“You don’t have the right to criticize a person for attending such a gathering or try to prevent his attendance at such a unique event. If you do, then others will come up and question what you were doing there, given the criticism there is concerning the state of democratic standards in Turkey,” Bilhan said, referring to Prime Minister Ahmet Davutoglu’s participation in the Paris rally.

Erdogan’s remarks also sparked an angry debate in Turkey that reflects the divide between Erdogan's supporters and detractors. Ugur Dundar, a veteran journalist and Sozcu columnist, a staunch opponent of Erdogan and the ruling Justice and Development Party (AKP), for example, turned the tables on Erdogan by putting forward an argument similar to Bilhan’s.

“Erdogan is justified in asking Netanyahu how he had the gall to go there. Israel massacred innocent civilians in Gaza. But in saying this, he has to consider that [Netanyahu] can respond by saying, ‘You should first account for the young lives that state violence took during Gezi,’ or ‘Tell us about the support Turkey provides for the Islamic State,'” Dundar wrote in his column.

He was referring to the anti-government Gezi Park demonstrations in 2013, when a number of young demonstrators were killed by the police.

Bowing to pressure from US President Barack Obama, Netanyahu apologized for the killings in March 2013 and offered compensation. Israel’s recent Gaza operation, coming at a time when the details of the Turkish-Israeli rapprochement were being negotiated, instantly revived the strain.

Israel’s response to Erdogan’s remarks was equally irate. On Jan.14, Foreign Minister Avigdor Liberman expressed anger at Europe for not openly confronting Erdogan. "Civilized, politically correct Europe's silence over an anti-Semitic neighborhood bully like Erdogan and his gang takes us back to the 1930s," Liberman said, hitting at European leaders in a historically sensitive spot.

Washington, on the other hand, quickly made its dissatisfaction with Erdogan apparent, although not at the level and with the intensity Israel expected. Asked about Erdogan’s remark, US State Department deputy spokeswoman Marie Harf said Jan. 13 that the United States did “pretty vehemently disagree” with him. “You can disagree with certain policies that a country promotes and not take that so far as to go into anti-Semitism,” she said. Asked about Ankara’s support for Hamas, Harf said, “Turkey is a NATO ally we work very closely with. They also have offered to host one of the training sites for the Syrian opposition. So I would encourage you to look at the whole picture when it comes to Turkey.”

Netanyahu was visibly angered over the West’s reluctance to condemn Erdogan openly. His office quoted him as saying, "I think the war against terror will not succeed if it's founded on hypocrisy, and I've yet to hear any world leader condemn the comments by Turkish President Recep Tayyip Erdogan, not one."

The verbal sparring continued with the response to Netanyahu by Davutoglu and Erdogan’s chief foreign policy adviser, Ibrahim Kalin.

Davutoglu, who stood only meters away from Netanyahu during the Paris rally, accused the Israeli prime minister of “heading a government that massacred children playing on the beach in Gaza” and of killing Turkish citizens on a humanitarian aid ship.

He also accused Israel of “committing crimes against humanity just like those terrorists who carried out the Paris massacre.” Kalin, for his part, accused Netanyahu of trying to use the Paris rally for his own political purposes. He said Netanyahu’s presence there “was an insult to the memory of the innocent civilians killed in Gaza.” He said Netanyahu “attempted a miserable political show” in Paris.

None of this suggests a Turkish-Israeli rapprochement is on the horizon, despite progress by diplomats after Netanyahu’s apology over the Mavi Marmara raid. The situation is further aggravated by remarks from various quarters in Turkey that are fueling anti-Israeli sentiments.

Ankara Mayor Melih Gokcek, for example, claimed that the Mossad was behind the Paris attacks because Israel is disturbed by the French parliament’s support for Palestinian statehood. “Israel definitely does not want this to develop in Europe. That is why the Mossad is definitely behind these attacks,” Gokcek told a convention of AKP youth in Ankara.

Zali de Toleda, a spokesman in Israel for Jews from Turkey, expressed his outrage in a letter addressed to Gokcek. “If I were to ask you where you got this very serious information, I am sure you would not be able to answer,” he was quoted saying by the Turkish media. “Did you not consider that remarks such as this create enmity toward Israel and the Jews, and that young minds, when they listen to you, may want to join al-Qaeda or the Islamic State?”

Outbursts similar to those from Gokcek hardly inspire confidence among members of Turkey’s beleaguered Jewish community, whose numbers are dwindling fast.

Given this environment, prospects for Turkish-Israeli and Turkish-Jewish ties do not look good.