Does Turkey Benefit From Cold War With Israel? 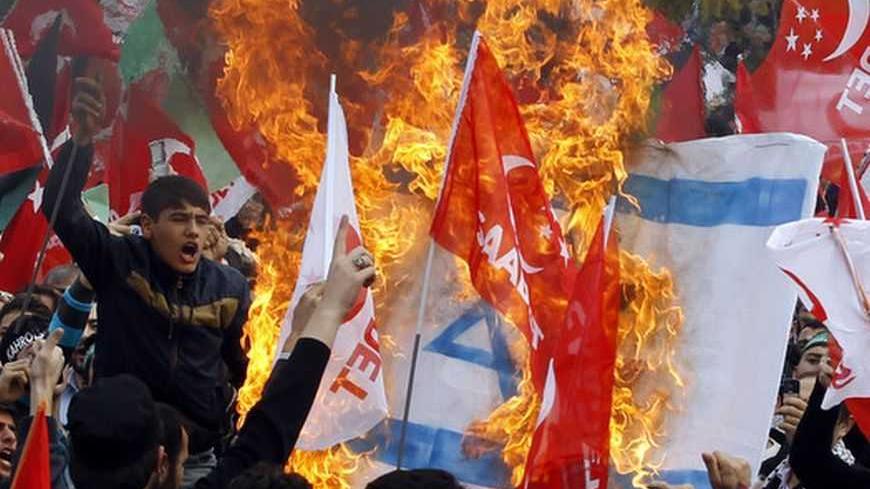 Supporters of the Saadet (Felicity) Party burn an Israeli flag as they shout anti-Israel slogans during a protest in Istanbul, Dec. 2, 2012. - REUTERS/Osman Orsal
January 1, 2013

Last week we learned Turkey has partially lifted its vetoes against Israel within NATO. Turkey now partially agrees to the participation of Israel in NATO activities outside of military exercises.

During Israel’s assault on the Mavi Marmara, the ship that was heading to Gaza in May 2010 to penetrate Israel’s blockade, nine activists were killed. Since then, Turkey-Israel relations have been reminiscent of the Cold War. To normalize relations with Israel, Turkey has demanded a formal apology, compensation to the relatives of the victims and the lifting of Israel's Gaza blockade. Israel has not fulfilled any of these conditions.

NATO is another instrument Turkey has been using to exert pressure on Israel and punish it. Israel is a participant in the “Mediterranean Dialogue,” which is NATO's program for security and stability in the Mediterranean. Until last week, Turkey had blocked Israel’s participation in this program.

Now that Turkey has eased its position, Israel will be able to participate in seminars and programs, but not joint military exercises within the framework of the Mediterranean Dialogue.

What does Turkey’s partial lifting of its vetoes against Israel in NATO signify?

Is this is a sign of a general warming of Turkey to Israel? The answer is simple: No, at least for the time being. According to NATO sources, Turkey's easing off is the result of a coalition against Turkey within the alliance.

Then there is the matter of deploying NATO Patriot missiles in Turkey against a possible Syrian ballistic-missile threat. It is no wonder that many quarters find a connection between Turkeys’s mellowing of its anti-Israel veto in NATO and the alliance’s agreement to respond positively to Turkey’s request for Patriots.

In a nutshell, what led Turkey to soften its attitude against Israel is the balance of power created within the alliance by vetoing of Turkey’s interests.

But when the issue is the bilateral Turkey-Israel relations, the key concept is not balance, but the lack of it. Asymmetry has defined the nature of Israel’s relations with Turkey since the establishment of the Jewish state.

The unchangeable principle that has regulated the bilateral relations of the two countries and is not likely to change easily is that “Israel needs Turkey more than Turkey needs Israel.” Therefore, Turkey is more important for Israel than the other way around.

Another feature of the bilateral relations in the 1999-2010 period was Turkey’s capacity to inflict more damage on Israel than vice versa.

In the period that started Israel’s 2008-2009 Gaza operation, followed by the Davos confrontation between Erdogan and Israeli President Peres that ended with the flotilla affair, neo-Islamist Turkish elite made a national pastime of Israel bashing. Justice and Development Party (AKP) elite owed this privilege to this asymmetry. It was because of this asymmetry they were able to win massive sympathy in the Arab street for Erdogan and the AKP.

But it is interesting to note that Turkey did not apply sanctions in bilateral trade relations where no such asymmetry exists. Despite the atmosphere of a cold war, trade relations continued to develop with their own dynamics.

Going to back to asymmetry, it can be claimed that the AKP’s foreign-policy wizards exaggerated the advantages of this unbalance and stepped up their disproportionate actions. To this end, Prime Minister Erdogan took a risky step in July 2011. To Turkey’s two conditions for normalization — apology and compensation — Turkey’s prime minister added as a third official condition the lifting of the Israel blockade of Gaza. By doing so, he removed the normalization of relations from a bilateral context and made it part of a multilateral Hamas-Israel question.

Unless Turkey rescinds this decision, the fate of Turkey-Israel relations will not be decided at bilateral level but in the complexity of a multidimensional equation that includes Hamas, Egypt, Fatah, Iran, some actors from outside the region and, naturally, Israel’s security imperatives.

Israel is not likely to lift the blockade as long as the security issue with Hamas is not resolved. That also means that even if Israel agrees to apologize and pay compensation, relations with Turkey won’t be normalized.

Of course, even if the blockade is lifted, Turkey will want to benefit from it.

All this means that Turkey’s foreign-policy designers think that Israel is not an important Middle East country for them — to the contrary, Turkey could benefit more from a cold war with Israel.

Then could the civil war in Syria favor Israel in the Turkey-Israel asymmetry? Not likely. If there were ever an expectation that the Syrian crisis could bring Israel and Turkey closer, this will not easily happen and hasn’t yet.

Israel might think that there could be exceptional cooperation and coordination with Turkey over Syria and that this could change the whole picture.

Israelis might even be thinking that should Turkey normalize its attitude to Israel, the Sunni rebels of Syria might be positively influenced and should they one day take over Damascus, they will be less hostile to Israel.

For Israel’s own interests, the most positive Syria scenario would be an undivided Syria that still maintains its state structure and in which not Iran, but Turkey plays the leading role.

But Israel cannot offer any inducement to Turkey to realize this scenario. Even rumors of a Turkish cooperation with Israel in the Syrian crisis will result in Turkey’s loss of legitimacy in the region.

In Syria, Israel needs Turkey, but Turkey doesn’t need Israel — for the time being.

As the asymmetry (and Prime Minister Erdogan, who makes use of it) are not going change anytime soon, the change has to come from Israel. For that, we have to wait for the results of the elections.