Normalization of ties with the Kurds and Israel are part of a broader strategy for an Ottoman sphere of influence and confrontation with the "Shiite axis," writes Kadri Gursel. 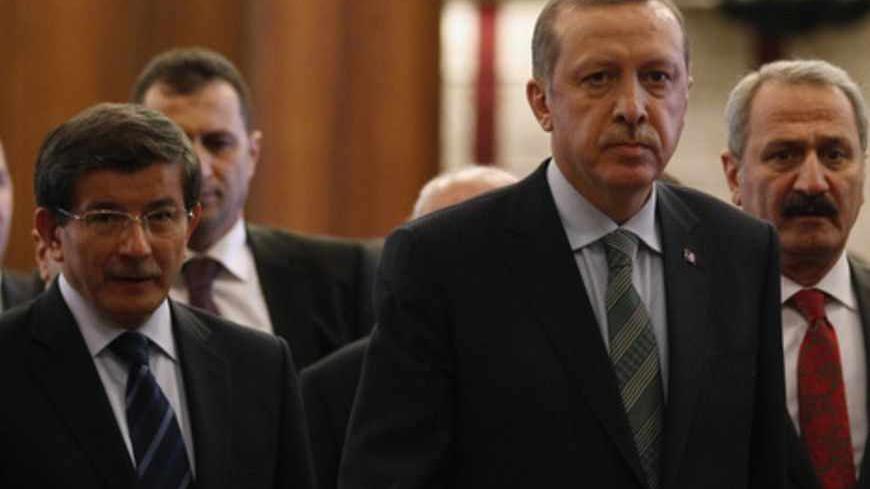 Turkey's prime minister, Recep Tayyip Erdogan, arrives for a news conference flanked by Foreign Minister Ahmet Davutoglu (L) and other officials before his flight to Denmark for an official visit, at Esenboga Airport in Ankara, March 19, 2013. - REUTERS/Umit Bektas

Looking from the outside, one could get the impression that Turkey was running amok in the Middle East in the second half of 2011. During that period, there were  few countries or actors Ankara did not confront, even threaten.

There were even occasions when Turkey’s foreign policy leaders had separately, but on the same day, defied Israel and Iran, two nations hostile to each other.

On the morning of Sept. 2, a day after the UN panel report on the flotilla affair was leaked to The New York Times with a pro-Israel slant, Foreign Minister Ahmet Davutoglu announced a five-item sanctions list that quickly put relations with Israel on a "cold war' footing: Diplomatic relations would be lowered to the minimum level, and all military agreements would be suspended; Turkey would take all measures necessary to ensure safety of navigation in the eastern Mediterranean; Turkey would not recognize Israel’s blockade of Gaza; All support will be given to flotilla victims to claim their rights.

In the later hours of the same day, in contrast to the agitated and stiff Davutoglu statement, the Turkish foreign ministry in a written response to a question announced that Turkey had agreed to deployment on its territory of the radar elements of a NATO ballistic missile-defense system.

This step, which posed a strategic challenge to Iran, also meant the collapse of the ”zero problems” policy Turkey had applied in relation to that country.

Also that September, Turkey blew up all bridges to the Baath regime in Syria, and initiated action to bring down that regime and have it replaced by a regime of Muslim Brothers considered friendlier to Turkey.

In the same month, Ankara threatened the Greek Cypriot government, recognized by the entire world as the Republic of Cyprus, with sending Turkish gunboats and frigates because of the hydrocarbon exploration that Greeks were carrying out on the island’s continental shelf.

The summer and fall of 2011 was also the period when the Ankara government stepped up its war against the Kurdish movement on all fronts. Hundreds of Kurdish activists were detained, PKK leader Ocalan was placed in isolation at his prison and military operations against the PKK were escalated.

September 2011 went on record as an interesting period when Turkey engaged in altercations with all actors except the Arab Spring countries of Tunisia, Libya and Egypt, where Sunni Islamists had gained much power, and the Sunni monarchies.

Until a few weeks ago, Turkey was a country at variance with nearly all powers and actors in the region except Sunni and Sunni Islamist ones. That the vast majority of Turkey’s Kurds were Sunnis didn’t count as an exception because Ankara’s main foe, the mainstream PKK, was pro-secular.

Turkey, a NATO member and candidate for EU membership, pursued Islamist, pro-Sunni and even Neo-Ottoman policies and, as a consequence, established itself firmly on the Sunni side of the Shiite-Sunni fault line that divides the Middle East.

This trend of shaping new fronts is not likely to change in the foreseeable future. On the contrary, the ruling AKP rule is structuring Turkey as a Sunni power that would spearhead the birth of a new order in the region.

This Ottoman Middle East policy preferred by the AKP is the bitter truth that boils the blood of those who want to see Turkey solving its internal problems with a pluralist democracy compatible with EU perspectives, and thus becoming a modern and normal country that will be an example to the region.

There are two variables that will make Turkey even more powerful: relations with Israel and the Kurds.

Two major developments on these two issues occurred on two successive days in sharp contrast to the events of September 2011. In his historic message read out to hundreds of thousands of people filling the square in Turkey’s largest Kurdish province, Diyarbakir, to observe Nowruz celebrations, Abdullah Ocalan confirmed his commitment to the peace process and said armed elements of the PKK would have to leave Turkey. The next day, Israeli Prime Minister Benjamin Netanyahu called his Turkish counterpart, Prime Minister Erdogan, on the phone and apologized to the Turkish people for the deaths he said were caused by Israel’s operational mistakes in the flotilla affair. He also said Israel has agreed to pay compensation to the relatives of the victims, and Erdogan accepted the apology.

One should not look at Turkey’s moves to normalize relations with the Kurds and Israel and think that Ankara has made a major shift in its Middle East policy. These are actually moves that would reinforce the basic threads of Turkey’s current Middle East policy.

Let’s start with Turkey’s reconciliation with its own Kurds. No doubt this development runs contrary to the interests of the Tehran-Baghdad-Damascus axis.

Any robust steps Turkey would take toward a lasting peace and solution with its own Kurds would mean that Syrian Kurds will move closer to Turkey, and therefore to the Syrian opposition. Anyhow, we have been observing developments along this line for the past few months.

Second, and more importantly, Turkey’s ties with Iraqi Kurdistan would become deeper, and economic integration between the two would gain momentum. The option for the Kurdistan Regional Government to market its oil and natural gas via Turkey, independent of Baghdad, would be even more feasible. This, in turn, would do nothing if not strengthen the dynamics that would divide Iraq.

In sum, peace with the PKK goes beyond denying the Shiite axis an important card it could use against Turkey.

As to Israel’s apology: Nobody should expect Turkey-Israel relations to return to the pre-2009 Davos affair days. An important feature of the new dominant neo-Islamist political culture in Turkey is to oppose Israel. This will not change.

Yes, Israel is a pragmatic country; yes, Israel is known for being without ego, but in its public opinion, an “”Erdogan-Davutoglu hatred’’ has taken root analogous to their disappointment with the Erdogan-Davutoglu team. The psychology of mutual hostility and lack of confidence between the two countries will continue for a long time, no matter what is done.

To expect Turkey to resume its trusted mediator role between Israel and the Arabs would be excessively optimistic.

Israel under Netanyahu continues with actions against Palestinians that will infuriate the Erdogan-Davutoglu duo.

A possible outcome of the process that began with the apology may be in the energy field. Turkey is the natural bridge to move the natural gas to be produced from Tamar and Leviathan fields. But for this you would need predictable, assured and stable relations, which won’t be easy to achieve under current leadership.

Turkish and Israel intelligence services can cooperate on Syria but this will never become an open cooperation. Turkey has a strategic interest in keeping Israel from interfering in Syria.

Normalization of ties with the Kurds and Israel have empowered Turkey in its implementation of an Ottoman sphere of influence and enabled it to defy the Shiite axis.