Turkey, both to protect itself from the potential negative consequences of regionalization of the Kurdish issue and to remove the Kurdistan Workers Party (PKK) as a threat, had no choice but to seek peace with its own Kurds, writes Kadri Gursel. 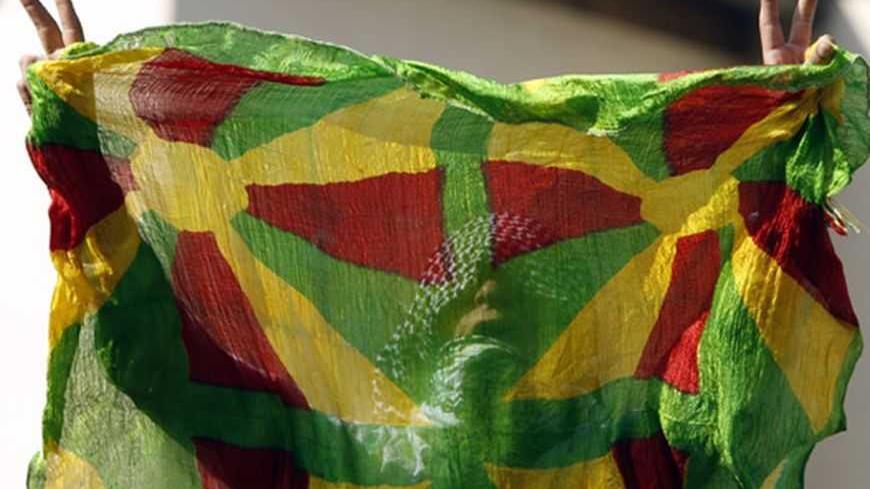 A masked man shouts slogans in favor of the Kurdistan Workers Party (PKK) guerrillas as he waves a scarf with the yellow-red-green Kurdish colors during a pro-Kurdish demonstration in downtown Istanbul, Oct. 19, 2009. - REUTERS/Murad Sezer

To reconcile with the Kurdish political movement and solving the Kurdish issue is not an option selected by Turkish Prime Minister Recep Tayyip Erdogan and his government from an array of other choices. Their choice doesn’t offer the luxury of arbitrarily discarding it if things don’t turn out to be as desired.

Compelling regional circumstances that were largely an outcome of the Justice and Development Party’s [AKP] misguided Syrian and Kurdish policies have forced this need for peace and settlement on Erdogan. Such a goal suggests that a peace and solution process is a grand ambition whose noble and ethical aspects cannot be disputed. But beyond that exalted objective, there could well be a “give-and-take” transaction between Erdogan, his AKP rule and the Kurdish movement which is a natural part of politics, offering to the PKK’s imprisoned founding leader Abdullah Ocalan and the pro-Kurdish Peace and Democracy Party [BDP] the following: “Let’s amend the constitutional articles that impede the solution of the Kurdish issue but in return you support a constitutional amendment that would introduce a Turkish style presidential system.”

But if the bargaining doesn’t work out, that is, the Kurds do not agree to support the presidential system, it doesn’t mean that the process will collapse.

The AKP government and Erdogan, apart from some selfish political calculations, have to make progress in the peace process to eliminate external threats to Turkey’s national security.

The “why and how” of this matter is as follows:

Beginning in the summer of 2011, Ankara stepped up its war against the PKK to unprecedented levels on all fronts. Simultaneously, Ankara put into effect a Syrian policy that sought to topple the Assad regime and replace it with a “brotherly regime” dominated by the Muslim Brotherhood. This produced not one but two boomerang effects.

We are talking of these two effects when we say “compelling regional circumstances.”

The first boomerang effect was that those who formulated and implemented the AKP government's Syria and security policies on the one hand incited the neighboring capitals in the region to see Turkey as an adversary that threatened their vital interests, and on the other hand propelled the PKK into ranks of these rivals.

Ankara, except for sending the Turkish Armed Forces to Syria to bring down Assad, did everything conceivable against the Syrian regime. This is why Iran, which sees the existence of the regime in Damascus as essential to its own vital needs, received a threat from Turkey. Ankara supported the Sunni opposition in Iraq and the Iraqi Kurds. Pro-Sunni policies pursued by Ankara in the region could well be the cause of instigating retaliation against Turkey from the Tehran-Baghdad-Damascus axis.

Meanwhile, Ankara simultaneously launched an all-out military and political attack against the PKK. Thousands of Kurdish political activists were detained and imprisoned on charges of terrorism. Abdullah Ocalan’s all political contacts with the outside world were severed and military operations against the PKK escalated.

All of this took place in the second half of 2011. The Kurdistan Free Life Party [PJAK], the PKK’S Iranian branch, heeded the PKK’s counsel and pulled its military forces to their bases in Iraqi Kurdistan, thereby ending the military struggle against Iran. This development that preceded the US withdrawal from Iraq by a few months was a sign of new alliances being shaped in the region.

The Kurdish issue is Turkey’s Achilles heel. It is its bleeding wound and as long as it remains as such Ankara cannot maintain an ambitious policy that would mean challenging regional powers. This reality was confirmed once more by Turkey’s Syrian policy.

Turkey’s war simultaneously against the PKK and the Syrian regime caused harmonization of the PKK’s military wing base at Iraqi Kurdistan’s Kandil Mountains with the Tehran-Damascus axis.

This harmonization heralded a serious threat potential to Turkey’s national security and the first signal of that was seen in increased terror actions in summer 2012. It became a strategic imperative for Turkey to neutralize the PKK by disengaging it from the Tehran-Damascus alliance.

The second boomerang effect is the regionalization of the Turkey’s Kurdish issue which is largely a consequence of Ankara’s support for Syrian rebels. The basic cause of the Damascus regime to lose most of its control over the border areas adjacent to Turkey was Ankara’s all conceivable direct or indirect assistance to the Syrian rebels. The Kurds living in the areas close to the Turkish border benefited from the situation and in summer 2012 one by one took over the control of the areas they lived in and declared their autonomy. The fact that the regime had simply abandoned some Kurdish areas doesn’t change the reality. The autonomy experiment of the Kurds was certainly disturbing for Turkey but the emergence of the Democratic Union Party [PYD], which is the Syrian branch of the PKK, as the strongest Kurdish organization was a situation Ankara could not live with.

Besides the PKK presence in Iraq, creation of yet another hostile autonomous region in Syria that the PKK can use without hindrance meant to be surrounded by a long PKK crescent that starts from the eastern Mediterranean and extends all the way to inside Iran.

Currently, Turkey, both to protect itself from the harmful dynamics of regionalization and to remove the PKK from the regional opposing front, had no choice but to seek peace with its own Kurds.

If this peace cannot be achieved, one has to foresee that the Kurdish political movement this time will come forward with separatist demands and engage in a far more bloody war with the support of their former regional allies on standby.

In fact, they are openly stating this. Here is what Ocalan told BDP parliamentarians who were allowed to visit him on Feb. 23: “If we are not successful, there will be a popular war with 50,000 people. Many will die. Not my affair. But all must know that we won’t live like before, neither will we fight like before. I have confidence in myself. Understand, neither the state or I can give up.”

Ocalan, who experienced 14 years of imprisonment with the last one and a half years in isolation, can see that the AKP government cannot give up on peace.

If the peace and solution process succeeds, Turkey can be expected to strengthen its traditional and strategic ties with all the Kurds in the region by boosting its soft power. A Turkey that has reconciled with the Kurds thanks to its competitive economic power, entrepreneurial class and abundance of human resources will form its own sphere of influence beyond its southern borders and will become a more assertive regional power than it is today. Turkey that has solved its Kurdish issue, and as such has eliminated the likelihood of this issue being used as a leverage and threat against itself, will thus be able to pursue a much more vigorous foreign policy.