Murat Karayilan, a leader of the Kurdistan Workers Party (PKK), is taking the peace file with Turkey from imprisoned Abdullah Ocalan, signaling normalization of the process, writes Kadri Gursel. 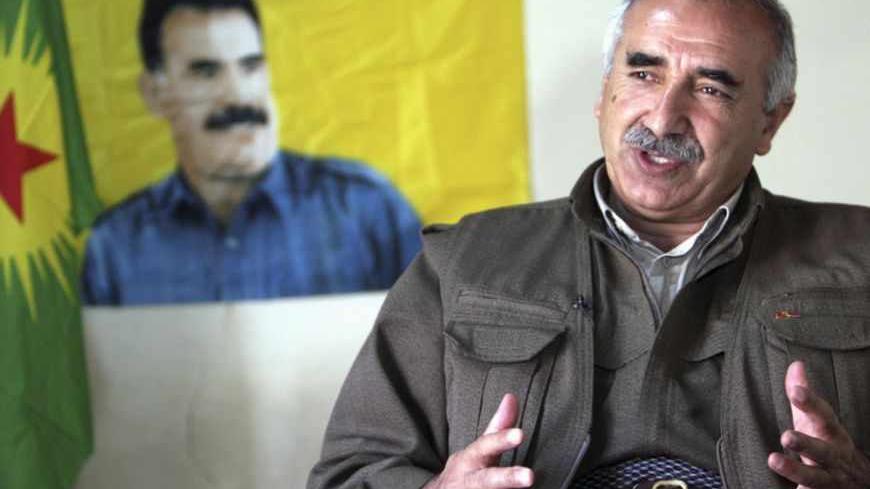 Murat Karayilan, acting military commander of the Kurdistan Workers Party (PKK), speaks during an interview with Reuters in the Kandil Mountains near the Iraq-Turkish border in Sulaimaniyah province, March 24, 2013. - REUTERS/Azad Lashkari

The speech by Kemal Kilicdaroglu, chairman of the Turkish parliament’s main opposition Republican Peoples’ Party [CHP], on May 7 to his party’s members of the parliament included tempestuous references to the peace process between the Turkish government and the PKK, but also had certain elements of truth.

I am quoting from the May 8 edition of the daily Milliyet: “I repeatedly asked [Prime Minister Recep Tayyip] Erdogan, ‘Why aren’t you talking?’ We are learning the facts from AKP’s [the ruling Justice and Development Party] spokesman at Kandil [the PKK command base in northern Iraq]. [Bulent] Arinc may be the government spokesman but they now also have a spokesman abroad. I am asking if what Karayilan said is true or not? We know he is telling the truth. Why should he lie? He says he was resolute and he [Erdogan] buckled  under the presence of guns. What else can he [Karayilan] say?

“A prime minister of a country can’t be a captive of a terror organization. You are a prisoner, you don’t know what you are saying and that is why you are not speaking out because you don’t know what to say: 76 million citizens are learning the truth from Kandil. It is Erdogan who is responsible for this shame.”

Although I am inured to crude and offensive language used in Turkish politics, I still couldn’t believe these words from Kilicdaroglu. I couldn’t be sure if Kilicdaroglu really described the PKK military-political chief Murat Karayilan as ”AKP’s Kandil spokesman” or if it was a typing error.

It turned out to be an accurate quotation. One of the tweets from Kilicdaroglu’s Twitter account actually said: "It appears that AKP is heading to a change in appointments. Government spokesman Bulent Arinc is to be replaced by the PKK leader Murat Karayilan."

Kilicdaroglu is the leader of Kemalist, republican and nationalist CHP [Republican People's Party] which, although a member of Socialist International, resembles none of the social democratic parties of Europe. The ideological wing that dominates this party resorts to such acrimony to defend the “Turkish nation state” concept against the Kurdish solution trend.

The intention of this article is to reveal some of realities concealed by the aggressive style.

Kilicdaroglu spoke to his parliamentarians a day before the official beginning date of the PKK withdrawal that was announced for May 8. PKK’s armed units began to leave Turkey with their guns and equipment by using the mountains, deep gulleys, and canyons they had traversed when entering Turkey.

What Kilicdaroglu said is correct: The Turkish public was kept informed of all these developments before and after only by Kandil.

It was the PKK’s military-political leader Murat Karayilan, who on April 25 announced at Kandil that the PKK forces would start their withdrawal from Turkey on May 8. At a news conference attended by about 100 journalists and TV correspondents near the PKK’s main headquarters, known as Kandil, in the rough mountainous area in the territory of the Kurdistan Regional Government, which begins at the Turkish border and follows the Iranian border south, Karayilan enumerated his expectations and demands from the Turkish government in the peace and solution process.

Karayilan said they considered the peace and solution process to be in three phases. He outlined the political and administrative steps and confidence-building measures the AKP government must deliver in each phase.

He then aired and consolidated his own understanding and views again on April 29, this time via the Kurdish media. One that attracted attention was his underlining that the PKK will give up its weapons only in the third and final phase, after passing the point of no return in the peace and solution process. Karayilan introduced freedom for the PKK’s founding leader Abdullah Ocalan, who has served 14 years of his life sentence, as a precondition of disarming of the PKK.

Talking of Ocalan, one must take note that the latest message from Ocalan was dated March 21. In his message, read to hundreds of thousands of people gathered in Diyarbakir on the occasion of Newroz Day, Ocalan issued a historic call for peace and declared that it was time for PKK armed elements to withdraw beyond borders.

Since then, nothing has been heard from Ocalan. That doesn’t mean that we won’t hear further from him after this point, but that is the way it is today. On the other hand, BDP parliamentarians in the first weeks of April conveyed two letters from Ocalan, one after the other, to Kandil detailing his views on withdrawal. The most-heard voice nowadays on peace and solution is Murat Karayilan. After him, come Selahattin Demirtas and Gultan Kisanak, the co-chairmen of the legal Kurdish party, Peace and Democracy Party [BDP].

Kilicdaroglu is not wrong in saying, "76 million citizens are learning the facts from Kandil.” He is also not off the mark when calling Karayilan ”the PKK leader.” All these developments are indicators of normalization of the peace and solution process in Turkey and that the process has produced its own dynamics.

Those who emerged to lead the Kurdish side and who are actually managing the process now are normal actors. But was Ocalan not a normal actor? He wasn’t. He couldn’t be. Such a sensitive and multidimensional process could not be managed by an actor who is living in isolation in a state prison, whose communications and contacts with the outside world needed the government’s permission and his ability to monitor the media was limited.

What is important is this: Ocalan as the founder and historic leader of the PKK has shown the way and Karayilan is now running the process in that direction. That is why he is the No. 1 actual actor of the process.

Until the end of 2012, the PKK at Kandil was a part of the Tehran-Damascus axis. Ocalan was the sole locally owned political asset in Turkey’s hands. The AKP rule with excellent timing removed Kandil from the regional opposition calculus and neutralized it, but that also meant a reduction in the value of Ocalan for the AKP government.

Two tweets from the Twitter account of BDP co-chairman Demirtas on May 7 best summarize in two sentences the dramatic change in Turkey’s Kurdish equation. The first: “The PKK and the state used their wills to develop non-hostility. This is why I think there is no more internal danger.”

The second was: "If there are no provocations by external powers, this process will continue in a positive manner.”

It is obvious that Demirtas is referring above all to Tehran and Damascus when he speaks of “external powers,” that is, the regional axis Kandil was a part of until six months ago.