Turkey's legal Kurdish political party, the Peace and Democracy Party (BDP), suggests it will oppose a constitutional amendment that would introduce an “oppressive and authoritarian presidential regime.” 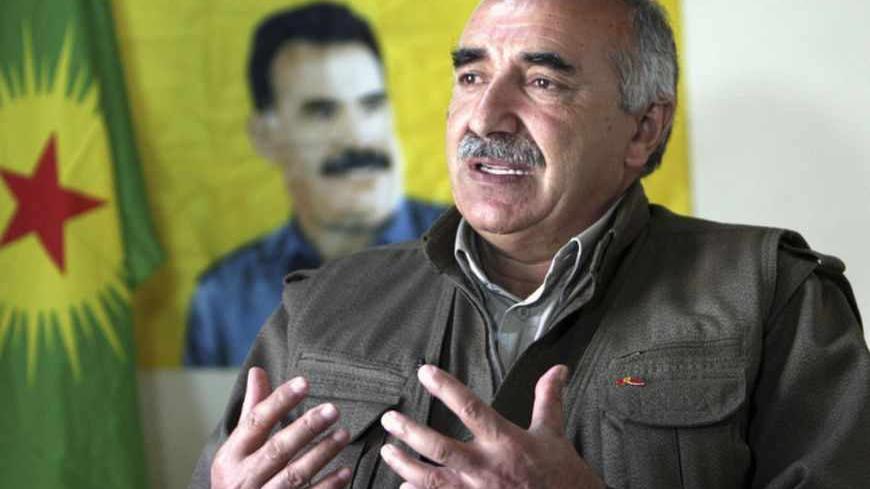 Murat Karayilan, acting military commander of the Kurdistan Workers Party (PKK), speaks during an interview in the Qandil mountains near the Iraq-Turkish border in Sulaimaniya, 330 km (205 miles) northeast of Baghdad, March 24, 2013. - REUTERS/Azad Lashkari

Two very important developments in recent days in military and political fields are allowing us to be more optimistic that the peace process the Justice and Development (AKP)-led government began with the Kurdish movement could actually reinforce democracy in Turkey.

The first was an historic event. Murat Karayilan, the military leader of the Kurdistan Workers Party (PKK), in a news conference covered by about 100 journalists at his main headquarters in the mountainous Qandil region in Iraq’s Kurdistan Regional Government territory, announced that their armed units would start leaving Turkish territory on May 8.

This development would be first major concrete outcome of the peace process and would open the way for further positive developments. Although not as spectacular as the first, the second major development that is at least as much vital for unhindered progress in the process was in the political field.

Selahattin Demirtas, the co-chairman of the Peace and Democracy Party (BDP), the legal Kurdish political party represented in the Turkish parliament, in an interview to daily Taraf on April 22 said that even if the AKP agreed to come up with a constitution that would meet all the Kurdish demands, they would never support a constitutional amendment that would introduce an “oppressive and authoritarian presidential regime.”

In the proposal Prime Minister Recep Tayyip Erdogan’s AKP submitted to the parliament, the president would be equipped with powers to rule the country with decrees and abolish the parliament when he deemed it necessary. This president would also have the authority to appoint high judiciary members. But the number of AKP seats in the parliament is not enough to approve a constitutional draft that would create the system he wants. For that, he needs the cooperation of other parties.

What Erdogan aspires to is a constitution that will grant him a highly personalized and authoritarian presidential system while meeting the Kurdish demands for autonomy, equality and education in Kurdish language. The prevailing suspicion that he would have all this approved by AKP and BDP votes in the parliament and then submit it to referendum was poisoning the peace process. Demirtas put a categorical end to this debate, disconnected the peace process from presidential dreams and wiped out the poison.

Now let’s go back to the beginning and look the messages Karayilan gave in his historic news conference.

Karayilan said the phased withdrawal will begin on May 8 with small units, and with the objective of carrying it out with “guerrilla moves, secretly and with discipline in shortest time possible.”

Karayilan said the area where the withdrawing PKK units will redeploy will be ”South Kurdistan,” that is, Iraqi Kurdistan, and appealed to the Kurdistan Regional Government to show “necessary understanding to the official presence of the guerilla forces.” The PKK military leader added that in the process they expected the “same sensitivity and seriousness” from Turkish military forces, too. He warned that should there be an attack or operation against the withdrawing guerrillas, the process will be immediately halted and the right to retaliate will apply.

At this point, it would be beneficial also to touch upon the debate whether “the PKK will withdraw armed or unarmed after leaving their guns in Turkey” that unnecessarily occupied Turkish public opinion for a while. From Karayilan’s words it is clear that the PKK units will withdraw with their guns and equipment. Here it is worth noting a response of Karayilan to a question on the subject:

“How can the people withdraw from the mountains without guns? Even wolves will stop them. They need to protect themselves to survive. PKK forces will withdraw relying on their own strength.”

Karayilan explained the linkage of ceasefire and withdrawal of armed PKK forces from Turkey to the solution of the Kurdish issue in context of a three-phased process.

For him, “ceasefire and successful withdrawal of guerrilla force” is the first phase.

He then elaborated on the second phase: ”In the second phase, it will be mostly be the state and the government fulfilling their responsibilities for a lasting solution to the issue. With some steps taken in this process and with constitutional reforms the conditions for true democratization of Turkey and solution of the Kurdish issue will materialize.”

In this connection, Karayilan asked for dismantling of what he called “”special warfare structures” such the village guards [pro-state Kurdish militias paid by the state] and special operations teams.

Karayilan listed their expectations from a new constitution as” democratization of Turkey, ending the denial of Kurdish people and guaranteeing the rights, freedom and equality of all identities, beliefs and sects and said such a constitution is of  “crucial importance."

Karayilan then said the last and third phase that will follow will be the "normalization." His expectations for this phase is normalization process for sustainability of peace and societal reconciliation, equality and freedoms. Parallel to implementation of  a process during which all, including Leader Apo ["uncle" — familiar name of Abdullah Ocalan] are freed, total decommissioning of weapons and disarming of the guerrillas will be on the agenda.’’

What is to be concluded from Karayilan’s remarks?

One: Disarming of the PKK, contrary to some unrealistic expectations, will not be in near future but only in the last phase when the solution process reaches the point of no return. PKK will maintain its presence in the Middle East as an armed entity in the foreseeable future.

Two: The PKK military leadership sets the release of its founding leader Ocalan from Imrali island, where he is serving a life sentence, as a prerequisite of disarming.

Three: This news conference at Qandil has elevated Murat Karayilan, the Chairman of the Executive Council of Union of Kurdish Communities [KCK], to beside Ocalan but much stronger vis-à-vis the process. Henceforth, Karayilan will be an equal interlocutor of the process.

This extremely important news conference at Kandil has added a totally new momentum to the peace process, It is of vital importance for this process to move forward with its own dynamics and as free as possible from personal political career planning of the most powerful man in Turkey, Prime Minister Erdogan.

At this point we have to go back to the interview of the BDP co-chair three days before eth Kandil press conference. The political substance of Demirtas’s remarks has contributed to the resilience and strength of the process.

I am herewith summarizing the responses of Demirtas to the questions of Nese Duzel of daily Taraf:

Duzel: Under what conditions would you accept writing a Constitution with the AK Party?

Duzel: What kind of pressure can there be regarding the Constitution?

Demirtaş: Because the AKP does not propose a ‘presidential’ system similar to the one in the United States or other democratic countries. It proposes a ‘president’ system. If these are brought before the BDP as a condition to advance in the peace process, we will not make such concessions. That can’t be called peace anyway.

Demirtaş: There is no connection. The presidential system is not a condition for peace, it can’t be. Let me say this openly as the BDP co-chair. If they write ‘autonomous Kurdistan’ in the Constitution, and if they openly say that education in Kurdish mother tongue education is free, but in return write an article in the Constitution allowing for an oppressive-authoritarian presidential system, we would not say ‘yes’ to that Constitution. How can I say it more bluntly? Peace cannot be achieved in a country ruled by one man. Peace comes with democratization.”