Kadri Gursel writes on how the letters of Abdullah Ocalan, the imprisoned head of the Kurdistan Workers Party (PKK), signal both a first step in building confidence and the difficulties to achieving a final agreement. 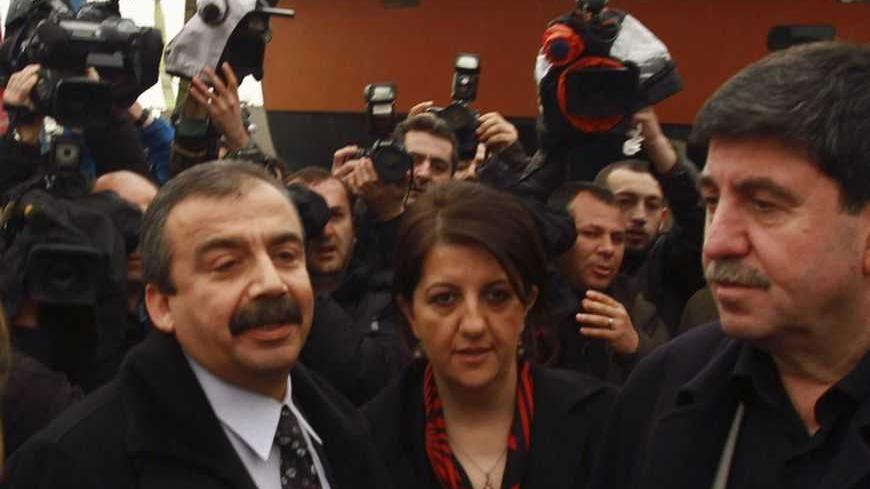 The first concrete moves within the framework of revitalized peace talks between Turkey's AKP government and Abdullah Ocalan, the imprisoned founding leader of the Kurdish movement PKK, which has been waging armed insurrection against the central authority for 29 years, are expected to come from the PKK.

What has been reported about the long meeting between three members of Parliament of the pro-Kurdish Peace and Democracy Party (BDP) and Ocalan at  the Imrali Island Prison, where he is serving a life sentence, led to expectations in Turkish public opinion in two key areas: hostage releases and a cease-fire.

Ocalan, whose moral and political authority over the Kurdish movement that is product of his organizational skills still continues after 14 years in prison, gave a short note to the Kurdish parliamentarians to share with the public. Pervin Buldan, one of three BDP members of parliament permitted to visit Ocalan, read that note to the public. It had this suggestion addressed to the PKK: “The state has prisoners. The PKK has prisoners. The PKK must treat its prisoners well. I hope they will return to their families soonest.”

This remark was interpreted as the PKK willingness to release soon some of the 16 hostages, five of them state officials, it has been holding for a long time. If realized, this will be the first concrete confidence-building measure of the process. If further moves follow on a positive track, a second development expected in the near future would be Ocalan’s calls for a nonaction phase and for PKK’s armed forces to leave Turkish territory.

A long excerpt of the minutes of the meeting between Ocalan and the BDP team was published Thursday [Feb. 28] by Turkey’s mainstream daily Millyet. The contents of the minutes conformed to news reports in mainstream media over past few days about the “solution calendar” Ocalan was expected to propose to his organization.

According to confirmed reports, Ocalan, in his cell, hand-wrote three documents of 20 pages each, detailing the solution to the Kurdish issue and the calendar for the peace process. As per Ocalan’s request, these documents were delivered to the military wing of the PKK on Kandil Mountain in the territory of the Kurdish Regional Government and to the PKK in Europe. Ocalan wants the relevant officials to discuss his texts without delay and to inform him of any opposing views and proposals within two weeks.

Ocalan will then issue his calls for nonaggression and withdrawal after assessing the responses. He wants to time his next declarations to coincide with the Newroz celebrations that the Kurdish movement observes as a political manifestation on March 21 in public spaces every year.

According to reports in the Turkish press, the message Ocalan sent to the military wing asked that the withdrawal be completed by Aug. 15, which is the day he began the armed insurrection in 1984.

Newroz is observed in Iran and in some Central Asian countries either as Iranian New Year or a celebration of the arrival of spring. The Kurdish movement considers Newroz as based in Kurdish mythology to be an important element of the Kurdish identity.

Since last November, the PKK has been effectively in a nonaction mode. Until a few days ago, the same could have been said of state security forces that had also suspended operations. But last Tuesday [Feb. 26], Turkish warplanes bombing PKK targets in Iraq near the Turkish border, clearly delivered the message that until the PKK openly declares it, an actual cease-fire is out of the question. In the meeting minutes published in the daily Millyet, Ocalan is quoted as saying that the PKK forces will not leave Turkey without reciprocity and without guarantees.

Ocalan said the PKK military wing feels that “even if there is a withdrawal based on mutual cease-fire, it will take at least two years,” but Ocalan said the wing was “too pessimistic.”

The PKK leader wants assurances that state security forces and village guards would not be deployed in rural areas to be vacated by the militants.

This is what Ocalan had to say on withdrawal: “It can’t be a withdrawal as envisioned by the PKK or by the AKP. Commissions will have to be established, including a truth commission. [These are the commissions the PKK demanded to be set up within parliament to investigate all violations of human rights that had victimized the Kurds throughout the existence of the republic.] Only then there will be a withdrawal and return to the villages [He is referring to the return of people to their villages evacuated by the state.] If they don’t do this, there will be no withdrawal. I don’t share the view that guerrillas will be finished once we withdraw.”

Ocalan then warned the AKP regime: “If I don’t succeed, there will be a popular war with 50,000 people. People will die. I am not involved. But all must know that we won’t live or fight as before. ... I hope AKP will not misunderstand us. Wrong understanding will be a disaster.”

All this shows that the process will not develop in line with the AKP's desire not to be seen as conceding to terrorists in the lead-up to a possible constitutional referendum, so as not to lose votes and prestige in its conservative constituency.

It is now clear that Prime Minister Recep Tayyip Erdogan’s view that the withdrawal of PKK forces from Turkey as a precondition to the peace process is not workable.