The Kurdistan Workers Party (PKK) expects confidence-building measures and is seeking to lower expectations in its talks with Turkey, writes Kadri Gursel. 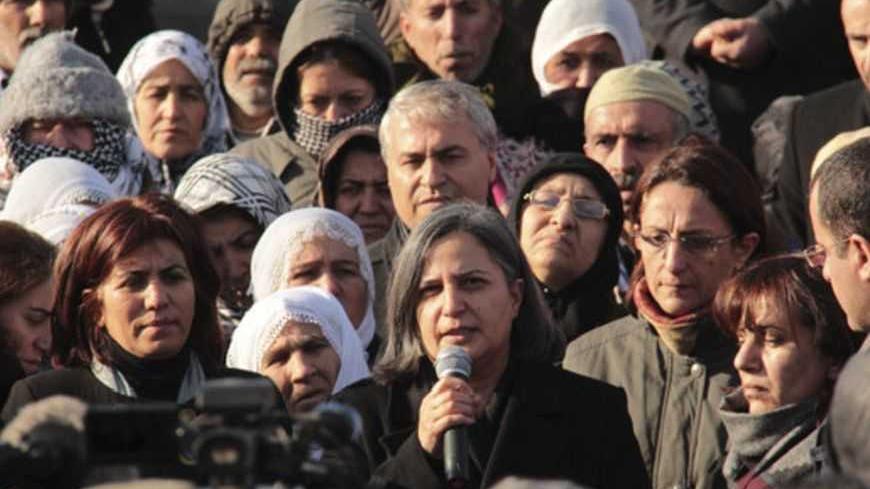 Abdullah Ocalan, the founding leader of the PKK, gave a short message to share with the public to three parliamentarians of the pro-Kurdish Peace and Democracy Party [BDP], who were allowed to visit him on Feb. 23 at the Imrali Island Prison, where he is serving a life sentence.

The BDP parliamentarians were able to meet with the prisoner thanks to the progress made in what the media dubs as the five-month-old ”Imrali process” of discussions between Ocalan and intelligence officials representing the AKP government.

The short statement read out by BDP women parliamentarian Pervin Buldan to media people waiting for them at the ferry landing said:

“This meeting is a historical step. We are living through a historical process. All parties must be very careful and sensitive in this process. The state has prisoners. The PKK has prisoners. PKK must treat its prisoners well. I hope they will reunite with their families in the shortest time.’’

The wish of the prisoner, referred to respectfully by the BDP parliamentarians, was perceived at the headquarters of the Kurdish movement’s military wing at the Kandil area of the Zagros Mountains in Iraqi Kurdistan as “an instruction for the PKK to release state officials it is holding.” This instruction was carried out last Wednesday.

The PKK released one district governor candidate, two policemen, one army non-commissioned officer, one specialist sergeant and three private soldiers. The PKK had transferred these officials they had abducted in Turkey to their bases in Iraqi Kurdistan. They were handed over to two BDP parliamentarians and civil society representatives in the territory of the Kurdistan regional government.

By ending the incarceration of these hostages — held from at least 559 days to as long as 640 days — the PKK took the first confidence-building step as an outcome of the Imrali process. It is reported that the PKK is holding 11 civilians as prisoners.

What does the PKK’s release of all state officials it had been holding mean beyond being the first concrete step?

According to Gultan Kisanak, a BDP parliamentarian and the co-chair of BDP, who met with a small group of Turkish journalists Thursday in Istanbul, that move was “a step of goodwill and confidence-building.’’

But Kisanak, averse to the excessively optimistic and unrealistic expectations that the release of the state officials could create, preferred to speak guardedly: “Current [Imrali] discussions must become negotiations. We haven’t yet begun to talk. We consider ourselves as being in the preliminary stages of crossing to a new track. We are at crossroads. If we can’t manage to talk this time, too, the cost of violence and war will be higher. For sound progress in this affair, some committees, mechanisms must be established ... .”

Kisanak was alluding to former failures when she said, “if we can manage to talk this time, too.” Following the collapse of the “Opening” process that was the first attempt of the AKP government in 2009 to seek a solution to the Kurdish issue and after the June 2011 general elections, Turkey had to confront waves of violence. Kisanak's remark, “This time the cost of violence will [be] higher,” has to be assessed in light of the reality that Turkey’s Kurdish issue has become regionalized as a consequence of the Syrian conflict. One reason that prompted the AKP’s Turkey to seek peace with the Kurds was the recognition that Ankara’s interventionist regime-change policy in Syria was in at an impasse that would not allow any drastic changes in that policy. This is why Ankara opted to make a profound change in the Kurdish issue. The result sought was to break off the PKK from the Tehran-Damascus axis it had attached itself to and thus prevent the movement from posing a threat to Turkey. Ankara has been successful in this effort so far.

As long as the Syrian crisis persists and the Tehran-Damascus axis perceives Ankara’s policies as a vital and strategic threat, a failure in the Imrali process will be fatal.

While BDP co-chair Gultan Kisanak was cautious, she was visibly uncomfortable with the excessive expectations surrounding Ocalan’s role:

“Perhaps because we are Middle Easterners, we have linked the entire matter to Ocalan. It is as if Ocalan has a magic wand in his hand. He will just issue a call and the Kurdish issue will be solved overnight. But in other similar cases world over, committees were set up, parliaments had taken decisions."

Kisanak wants the AKP government to create the mechanisms for the solution process and take confidence-building steps:

“The parliament has to make a decision on this new process. One step that should move in tandem with Imrali discussions is a program for democratization. The parliament must set up commissions to debate the democratization program. Independent from discussions, legal arrangements have to be made to prevent arrest of people as terrorists because their ideas are not appreciated. In [the] last 10 years, more than 50,000 people were prosecuted under anti-terror laws.”

Now, in the short-term, a declaration by Ocalan is awaited on the eve of the March 21 Newruz celebrations. Naturally there is acute curiosity about the content of that declaration.

Ocalan will formulate his declaration according to responses he will receive to the letters he had sent to the PKK in Europe, the military wing at Kandil and to the BDP.

The Turkish government and its media have played up  expectations that Ocalan will call for a ceasefire and withdrawal of armed PKK elements. Kisanak tried to temper these expectations:

"On the 21st, Ocalan will emphasize more the beginning of a new era rather than a routine call for a ceasefire. If we have reached the point of launching official negotiations, I believe it will be more important and meaningful to announce that. Everyone looks at giving up arms and withdrawal aspects of a declaration. This should not be the case. It should be seen as the beginning of the process of solving the Kurdish issue by talking. We don’t think it is wise to create such high expectations in the public opinion.”