The AKP government’s stalling of required steps for peace and a political solution with the Kurds increases the likelihood of controlled violence. 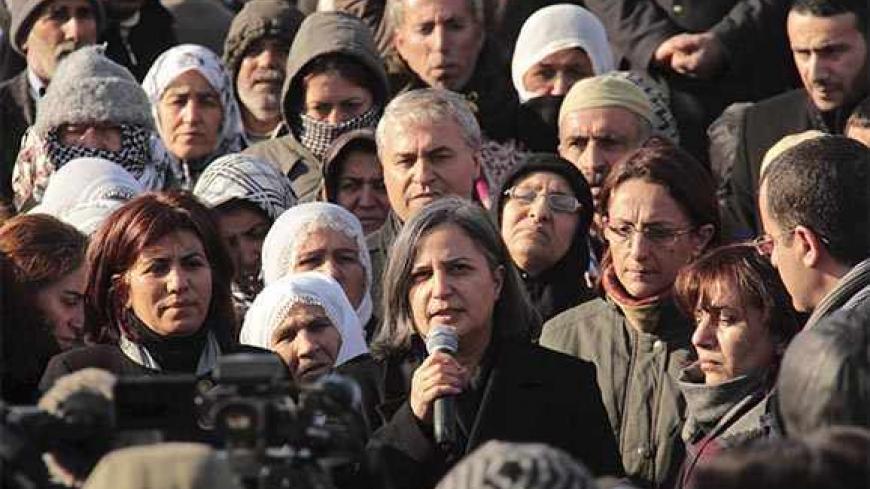 “The peace and solution” process that was initiated in the last months of 2012 as a result of the AKP government’s resumption of dialogue with the Kurdish movements and its imprisoned leader, Abdullah Ocalan, has been inert for quite a while.

The political framework of the process still exists and the non-hostility status is continuing. But it is not possible to speak of the existence of the dynamism that is needed to make the process robust and resilient to the stresses of time, external circumstances and pressures.

Gulten Kisanak, co-chairwoman of the legal Kurdish party BDP, the Peace and Democracy Party represented in Turkey’s parliament, on Oct. 25 told a group of journalists, including me, that there is a  "clog” blocking the solution, and that the government is responsible.

Kisanak said of the clog, which doesn’t mean the end of the process: "We are talking of a process that doesn’t mean a full solution, that doesn’t satisfy expectations and that is taut but not ruptured. The government wants to attribute the responsibility for the crisis to the Kurdish side and is not willing to accept that it is not taking the steps it has to."

Kisanak defines the current blockage as a "low-intensity solution process."

My impression from the meeting, also attended by the other BDP co-chairman, Selahattin Demirtas, was that if this blockage continues, then the process will be increasingly vulnerable to clashes.

The turning point of the process was the call by Kurdish leader Abdullah Ocalan on March 21 for the PKK to cease fire and to withdraw from Turkey. In May, the PKK began its withdrawal from Turkey.

At that time, the Kurdish movement was expecting the Turkish government to take reciprocal confidence-building steps. What were these?

The government, however, did not take any of these steps. An adverse outcome of that was the declaration on Sept. 9 of the PKK military-political leadership (known as “Kandil” in Turkish public opinion) that it was suspending the withdrawal process.

Then Prime Minister Recep Tayyip Erdogan on Sept. 30 announced a "democratization package“ and granted these rights to the Kurds: Establishing private schools for Kurdish language education; restoring the Kurdish village names that were changed into Turkish; allowing use of the letters X, Q and W of the Kurdish alphabet on signposts and ID cards; freedom for political campaigning in Kurdish; and abolishing the student’s daily vow of allegiance that starts, “I am a Turk.”

Nobody could argue that these rights, some of which were already in practice, brought any additional political cost to Erdogan and his government.

The Kurdish movement was not satisfied by the package. If the meager content of the package was one of the reasons for this dissatisfaction, the other reason was its unilateral formulation, contravening the spirit of the solution process.

Co-chairman Demirtas said they had told their AKP interlocutors, ''If you prepare the package without consulting us, we will not link it to the process. If we hear about this package for the first time from the mouth of the prime minister, then it will remain as your package."

Twenty-two days after the announcement of the package, the military-political leader of the PKK, Cemal Bayik, spoke to a Reuters correspondent at his Kandil base and conveyed the following threatening messages to Ankara: "We are at the end of the process. Either [the government] accepts deep and meaningful negotiations with the Kurdish movement or a civil war will erupt in Turkey. … We are preparing ourselves for the return of the groups which have withdrawn from Turkey to North Kurdistan [Turkey’s southeast] if the government doesn’t accept our conditions." Batik said Erdogan’s “democratization package has nothing to do with democracy." There has never been such a strong declaration from Kandil since the beginning of the PKK withdrawal.

We asked Demirtas how he interprets Bayik’s remarks. He replied: "Kandil is ramping up pressure to transform contacts with Ocalan into negotiations. They know that otherwise Ocalan will terminate the process. The PKK wants the government to understand that it is not bluffing."

Almost all the notables of the Kurdish movement define the government’s relationship with Ocalan at the moment as a "dialogue” and want it to instead turn into real, in-depth negotiations where concrete steps for a solution of the Kurdish issue are discussed.

Precisely at this point we come face to face with the second cause of the clogging of the process — the status of Ocalan. Ocalan, who is the No. 1 actor in the process, carries out his functions by meeting with BDP teams and Turkish intelligence. Ocalan’s indirect connections with Kandil are also based on these two channels.

Some of the BDP parliamentarians who want to meet with Ocalan are arbitrarily vetoed by the government, which at times poses problems in putting together a delegation. The government bases its decisions on some statements and actions of these politicians it doesn’t approve.

This naturally creates anger in the BDP. Kisanak said the government has prevented delivery of letters from Kandil to Ocalan and that was one reason why Kandil has stiffened its position against the government.

Demirtas then told us about Ocalan’s position in the process and his demands related to his functions:

“In the last three-four meetings we had with Ocalan, we saw that he has lost some hope. He has not abandoned the process. He insists on it. He is not underestimating the point reached. He appreciates contacts made with him but he is angry with the government. If the quality of the meetings is not elevated, Ocalan won’t continue. He wants dialogue to become negotiations. He says, ‘I must be a negotiator. We can’t keep on just talking to the government.’ He wants deeper debates. The only way the government can save the process is to make the contacts more meaningful.”

Demirtas said Ocalan has three demands: "To enable Ocalan to meet with intellectuals and the media in addition to his meetings with the BDP and the government, in short, 'external contacts.' To have a team of intellectuals from Turkey recognized by both sides to supervise the negotiations and the process and to form a 'monitoring team.'"

The third request is for the government to finally come out with its solutions.

Demirtas said Ocalan thinks along the lines of, "We have given up guns as an instrument of politics. Then we must be offered new instruments to pursue politics. If they don’t agree with our three proposals in return to our giving up the guns, why should I continue with this process?”

Then, we have to ask the following questions: If all these adverse conditions continue unchanged, can the environment of cease-fire and non-hostility, which is for the time being the sole assurance of the peace and solution process, continue without disruption?

Another question that has to be asked is, ‘‘If the cease-fire collapses, will Turkey be facing a situation resembling the bloody clashes of the past?"

Demirtas said, ''A single bullet fired will mean the end of the cease-fire. Perhaps there won’t be sustained medium or low-level conflict, but …”

Kisanak repeatedly stressed that they will separate the elections from the solution process.

Putting together the remarks of Demirtas, Kisanak and Bayik, the following conclusion can be reached: As the Kurdish movement politicized and became more popular, its expectations from the elections increased. This is why the PKK, to protect its own political interests, had refrained from disrupting elections in Turkey by using guns. The government may well be thinking, without saying it, that that even if they take no steps for the solution and the current blockage continues, the PKK will not resort to weapons until the second half of 2015 simply not to disrupt the elections.

Leaders of the Kurdish movement must be thinking that the government’s perception that “the PKK won’t do anything” is weakening its deterrence and contributes to the government’s complacency in taking the necessary steps.

Hence the Kurdish movement's preference to walk the thin line that separates the solution process and the elections. This is why the PKK should not be expected to launch a massive bloody attack that will end the process and disrupt the essential calm during the elections.

But the Kurdish government doesn’t want the government and the Turkish public to think that the current non-hostility status is because of the forthcoming elections, rather than the peace process, and think that the cease-fire will hold until mid-2015, after the elections. This must be kept in mind.

If the government doesn’t take steps to move the solution process forward, we may see some interesting moves from Kandil, including the return of withdrawn forces to Turkey to the extent of endangering the cease-fire or an open declaration of the end of the cease-fire. This, however, doesn’t mean that the PKK will definitely attack; it can remain in a holding position to exert pressure on Turkish security forces in the field.

If things continues as they are, Turkey will enter a period in which the risks to peace and the solution process will mount and political engagement will be heavily laden with nuances open to clashes.